Having heard of Woolston Eyes, but not having been before, it seemed a perfect time to visit and see what the reserve was like. Travelling with my birding buddy Shaun, we set off from El Porto at around 8.30am and made the short trip up the M56 and through Lymm arriving at Thelwall Lane around 9.10am.

Woolston Eyes is an area of land between the River Mersey and the Manchester Ship Canal that is managed by the Woolston Eyes Conservation Group. It was formed in 1979 after agreement with the MSC company.  It comprises of four main beds or areas of land and brackish pools, with pathways and hides for viewing the birds.

A marshall greeted us at the gate and explained parking arrangements, so we parked a bit further up the lane and decided on a walk around No4 bed. After a short walk, the first thing that we saw was Giant Hogweeds, now this plant is phototoxic and can cause severe burns if you come into contact with it (phytophotodermatitis) very nasty. Some of these plants were over 20ft tall and looked like something out of Jurassic Park, fortunately they were clear of the pathways and some work was obviously underway to stop the spread by using chemicals to control them. The bees seemed to not mind the flowers on them!! 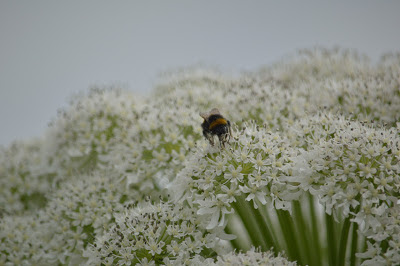 A lot of birds were heard singing including Song Thrush, Chiffchaff, 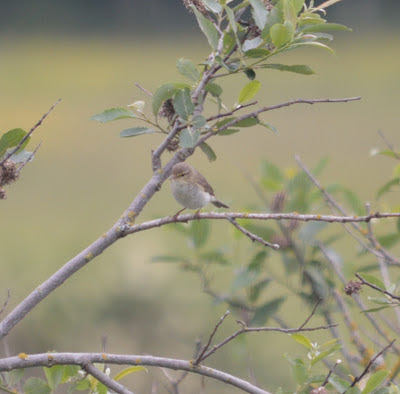 Willow Warbler, Whitethroat & Sedge & Reed Warblers. It was evident the area was good for the birds, in particular the Thrush as we were constantly crunching snails underfoot, not good when you are trying to walk quietly. Overhead a young Buzzard came into view and we watched for a while as it soared effortlessly in a circular motion. 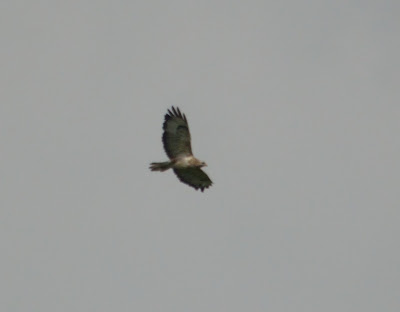 After about a half hours walk, we went up onto a bank that ran alongside the River Mersey, we saw a Mute Swan and a Great Crested Grebe on the water. Further on we heard a Garden Warbler singing, but despite Shauns best efforts at obtaining a pic, unlike our Delamere bird, this one remained well hidden! Finally we came back out onto the main stretch of road that leads up to the main area at Woolston Eyes, bed No3. We stopped at the burger van for a quick bite and a cuppa and after speaking to our ladyfriend from the RSPB at Burton Mere, we joined a group that was to be taken on one of the tours of No3.

As it was so busy, the volunteers were splitting groups into around a dozen people and setting off in 15 minute intervals so as to alleviate congestion in the hides. Our group leader was David Bowman, the Vice Chairman of W.E.C.G. and he showed us towards a long wooden bridge that crossed over the River Mersey and over towards the hides. We were told that Kingfishers can be seen regularly from this bridge in particular early mornings and late evenings. In addition to the birds, Badgers, Weasels, Stoats and Rabbits can also be seen. I was here for the Black Necked Grebe and it was not long before we were enjoying views of one of the rare migratory breeding species in the UK. Sadly numbers have dwindled since the peak of 52 recorded here in 2002, but they still had around 22 birds, with 5 confirmed broods :-) A fantastic looking Grebe, with a dumpy body and a fluffy rear end, they have a scarlet eye and lovely golden ear tufts, see picture below.......with chick. 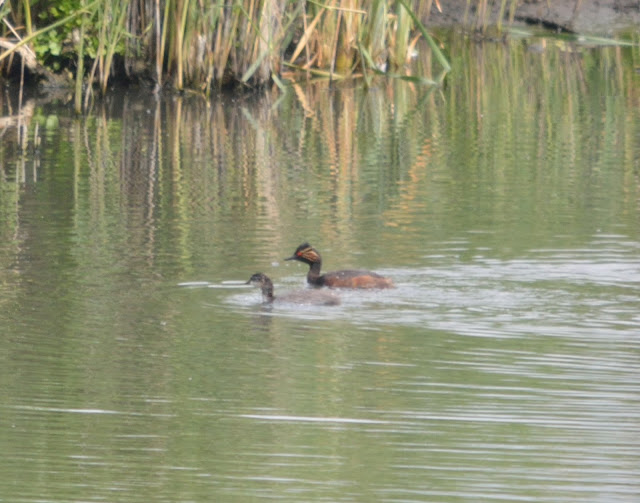 Also out on the pool was lots of Black Headed Gulls with young, some Tufted Duck and Shelduck (also with young) and a lot of Gadwall, which do particularly well at this site. David was doing a great job of keeping everyone moving along and we spent at least 10 minutes at each hide which was ample for a look around. Reed Buntings were calling from the reed beds and we also had been told some Water Rails had recently been seen with chicks :) One of the hides had feeders and we saw quite a lot of Greenfinches tucking in. Willow Tits are a declining bird across much of the UK, yet here at Woolston Eyes they breed each year and can be seen on the feeders, sadly not today. Shaun spotted a female Bullfinch on one of the feeders though and he got this shot........ 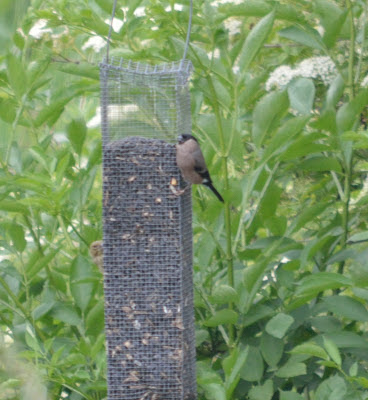 Further on we were shown some Moths that had recently been captured, including a large Elephant Hawk Moth whose caterpillar is said to resemble an Elephants trunk or eyes, make your own mind up :) 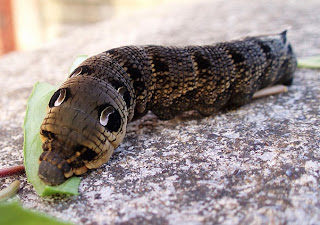 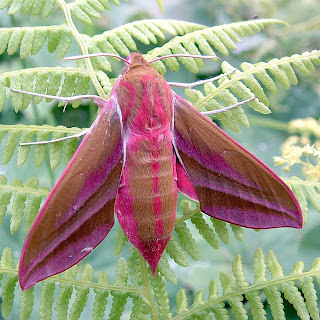 After we had seen the moths, we were taken to Kieran Foster who gave us a great talk on ringing and how they capture the birds in the mist nets and how the data is used to track species etc etc, sadly as it was past noon, they only had a Wren to show us, but a beautiful little bird close up all the same. It was time to depart and we made our way back off No3 bed across the bridge when we encountered the Wilde Family, Findlay & Harley rushing ahead, Mum Heather and Dad Nigel struggling to keep up aha, apparently it was my fault for mentioning the open day on Twitter (hehe) naughty step for Bucko. No time to chat unfortunately as it was very busy and queues were forming to get across and also back into the 'tented village' area.

We thanked Dave for him showing us around and joined up for permits to the reserve, which cost just £10 per annum (April to April) and £10 one off payment for a key that allows access to the locked areas of the reserve. Well worth it for some great viewing and for contributing towards the upkeep of the reserve. Other exhibitors today were Cheshire & Wirral Ornithological Society (C.A.W.O.S.) RSPB and the Badger Trust.

So after the obligatory Burger and cuppa, we headed home, soon to return no doubt when it is much quieter and to see lots more exciting birds. Incidentally the reserve has a record list of no less than 232 species since 1980. Here is a link to the groups website.


A big thanks to W.E.C.G. for making it an enjoyable day.