With fine weather promised after a dismal few days, myself and Shaun set off at 4.30am to see what we could find at Llyn Brenig. After around a 45 minute drive, we arrived at our destination after a minor sat nav problem and a detour round some back streets!! This early in the morning, the barrier to the visitor centre was down so we parked up in a small area near the barrier.

The first bird we clapped eyes on was a lovely Spotted Flycatcher, a first for the year for me and a lifer for Shaun, what a start. 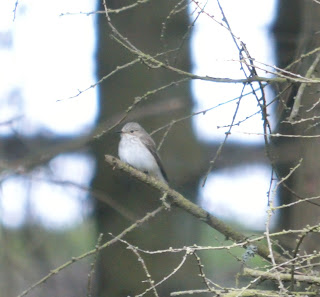 Willow Warblers were calling and the pink pink of Chaffinches could also be heard.

The views across the lake were breathtaking with conifer plantations, rolling fields and patches of small deciduous woodland and marsh. great habitat to find some boss birds. 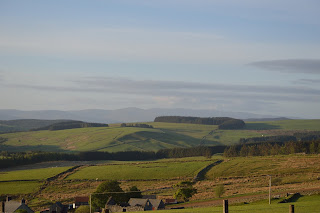 A Redshank flew from a nearby shingle spit and a Pied Wagtail ran along the shoreline catching insects. Walking across the dam, we could see all the boats moored up waiting for trout fishermen to hire them out, strangely no other birds could be seen out on such a vast expanse of water!! We did spot George Bush Snr and Henry Kissenger, who were busy reeling in a large Trout.... 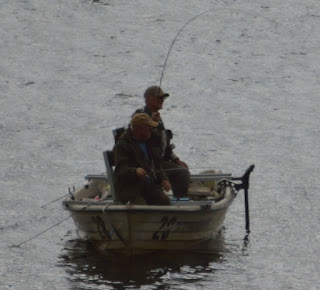 The sound of Cuckoos rang out across the valley and it was not long before we spotted one flying low across the fields. I then saw another Cuckoo on a fencepost being hassled by a Meadow Pipit and managed to get the scope on it and we took a few pics with the I phone through the scope with some success. Further on yet another Cuckoo was perched on some telegraph wires, it really was Cuckoo central. 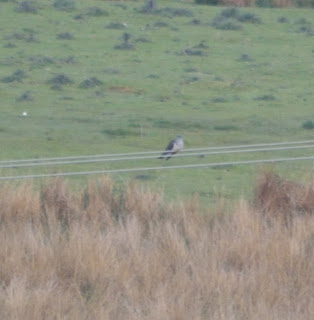 A pair of Bullfinches flew over, detected by their soft call.

The pathways bordered some serious dark conifer plantations and we heard a couple of Firecrests calling, but despite our best efforts we could not see the birds :( gutted as I've not seen one for some years. Further on down the track the different tones of numerous Goldcrests rang out and they actively darted from branch to branch, again no pic, but we did manage one later on. 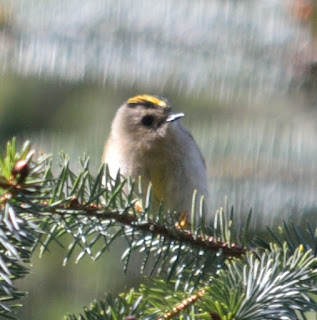 A couple of Ravens were croaking overhead and a hen Pheasant scurried along the fenceline anxious to evade us as we walked alongside. At the top of a hill, the path descended down into a lovely valley with a small caravan/static mobile home park. What a truly beautiful little spot, crossing a bridge we had this view of the fast flowing stream....magical. 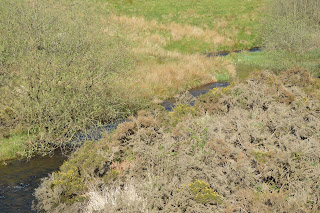 I said to Shaun, this looks like Dipper territory, so we walked through the homes and into a small field with some mini goalposts and looked up and down the stream to see if we could see one. Nope, nothing, but opposite was a hilly grassy/rocky slope with numerous bushes with some very high up at the top. Shaun spotted some Stonechats and then a bigger bird appeared on a bush perched right at the top of the hill. A lovely male Redstart (not a White Throated Robin) which for a while it looked like as it perched oddly and had a really distinctive long white supercillium and looked bigger, well I can dream!! 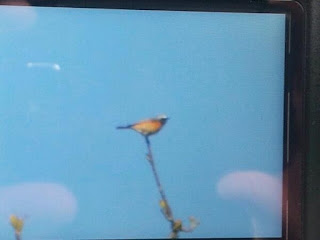 Walking back through the caravan park, lots of different birds were enjoying the numerous treats left out, fat bags, peanuts, seed, it was a little birdy haven. Siskins, Great Spotted Woodpecker and Coal, Blue and Great Tits were tucking in.

Making our way back towards the van for some sarnies, we walked alongside the stream and Shaun spotted it...Dipper, 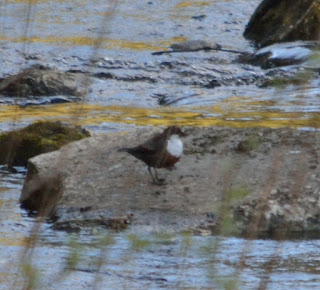 it bobbed up and down on a stone in the middle of the stream and then flew right past us with a beak full of insects. Some hungry chicks were in for a treat!! Cutting through yet more dense conifers, we heard loads of Goldcrests and also a Blackcap, which came obligingly into view for a quick photo :) 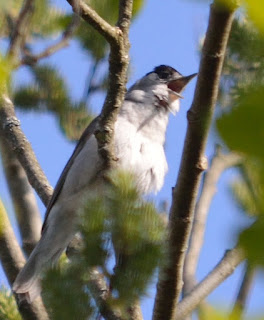 After a few sarnies and a much needed cuppa, we headed off. On the road towards the visitor centre, another Spotted Flycatcher could be seen in a small glade and two Mistle Thrushes were having a right old barny. A Song Thrush perched on an overhead wire with a beak full of insects 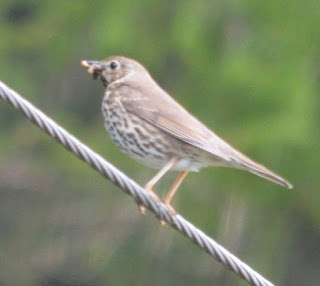 and a few Chiffchaffs were calling. Goldfinch and Chaffinch were also spotted. Upon arrival at the car park, the first birds we saw were a beautiful pair of Redstarts, Shaun managed a shot of the lovely male, (note the smaller supercillium) than on the first Redstart we photographed. 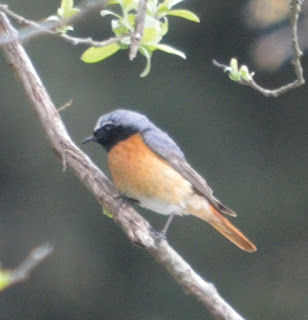 We had a chat with a lovely young lady at the visitor centre and she told us they had built an Osprey platform as a bird had flown through regularly each year. We could not locate this platform, or any Ospreys. Lots of LBJ's were around, mostly Willows and Chaffs. 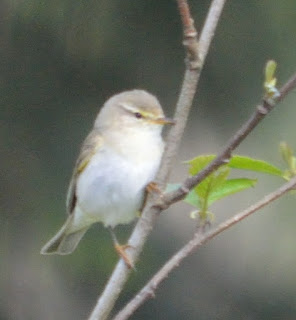 One of the little warblers looked like he had been drinking some of the strong stuff!! 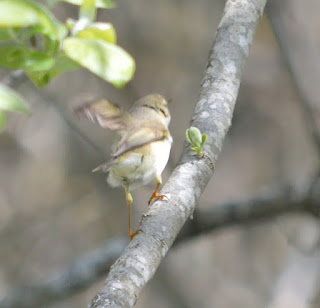 As we headed back to the van, I was scanning in the firebreaks between the conifers to see if the elusive Goshawk or any Sparrowhawks or Long Eared Owls were hiding from us, alas nothing :[

We drove further round the lake and came to a decent spot and parked up. As we got out a Tree Pipit flew onto the top of a conifer (a perfect photo opportunity) and after a while started it's song flight and rose up before parachuting back down onto the top of another small fir. 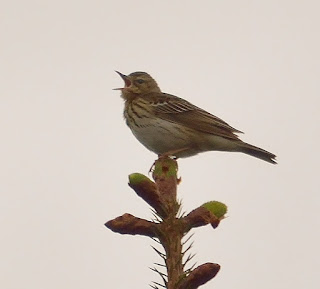 Not much else was about to be fair, a few Carrion Crows and the odd warbler, but very quiet, again no birds on the lake bar a pair of Mallards. Enough was enough so we headed off to the Moors, to see if we could spot the elusive Goshawk maybe displaying above a plantation (live in hope) die in Caegerwle..... ahem.

The heather moors had not yet began to flower and looked very dry and brittle, some Meadow Pipits and a Skylark were all we could see at first, then a pair of Buzzards were spotted side by side in a big conifer at the side of the woodland. Some Stonechats and a few Wheatear were also spotted.

A bit further down the road we stopped briefly at Llyn Bran, yet another reservoir and here we saw, Tufted Duck, Mallard and three Great Crested Grebes.

On the way back home nr Mold, we spotted a sign saying Coed-Y-Felin nature reserve, so decided to see what we could find. At the entrance gate a board displayed what we might see, a Pied Flycatcher stared back at us and gave hope we might see one!! It was a nice wooded walk to be fair and Robin and Blue Tit were all over the place, but no pied flycatchers :( A Treecreeper was a treat as it worked it's way mouse like up a sturdy oak.

It was very warm in the woods and lots of butterflies were to be seen, here are a couple of pics, not sure what they are :- 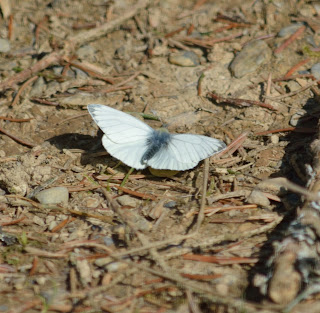 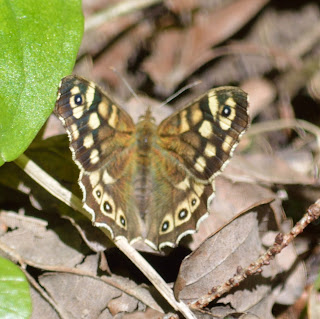 It was then I heard some chicks calling and spotted a hole in a tree, had to be Great Spotted Woodpecker and soon enough the parent came back with a beak full of insects and allowed Shaun a couple of good photos :) 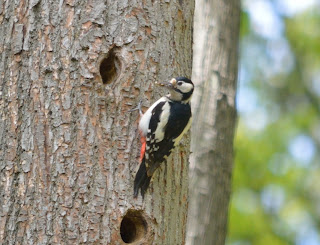 Willow Warblers and Blackcaps could be heard but not seen, unlike this Peregrine who flew right over the woods above us. 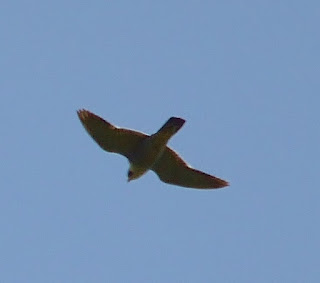 It must be nesting in the nearby quarry as their is some serious sheer rockface/ledges which would be good for a home. That was a good way to round the afternoon off, so we headed off after a thoroughly enjoyable days birding, but NO GOSHAWK !!