Wanted to get up early but alarm failed me, first time in ages. I could not get a lift to Martin Mere so I opted to do twitch by train which a few of my twitter friends had said they do an a regular basis..... hmmm. I was after a White Spotted Bluethroat which is normally a bird from Central & Southern Europe and it had turned up at Martin Mere in Lancashire !! 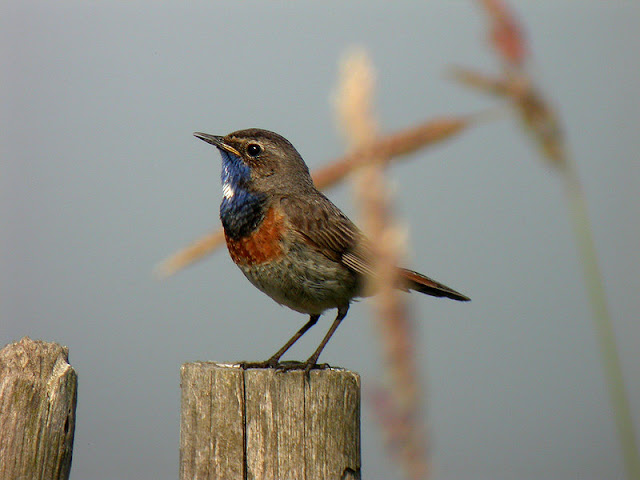 Making the dash to Overpool station, I arrived just in time to deposit £7.25 worth of the queens finest silver into the greedy ticket machine, actually it's not a bad fare to Southport. On the way, it began to rain at of all places Spital, "It's spitting in Spital, everybody in". I had left the house without my coat, but did I care no, I had visions of WSB posing gracefully.

After changing at Moorfields, I arrived at Southport at 11.15am, I then had to get a train to Burscough Bridge Junction, sigh, I arrived at 11.30, I then had to follow a trail of signposts across farmers fields for what seemed an eternity and I arrived at Martin Mere at 12.15. The nice lady said, "Oh your here for the Bluethroat, it's still showing well, just give me your £11.25 and follow the path up to the Harrier Hide and one of our escorts will take you to the bird". Sounded a good deal, so off I set rushing past Egyptian Geese, Goldeneye, Falcated Ducks and Red Breasted Geese without giving them a second glance.

I got to the Harris Hide and where now? not a bloody soul in sight!! Grrrr, My instincts took me up a path and I spotted a couple of birders, one of whom kindly told me the way " Follow the path, don't go through any closed gates and you will see about 20 birders, the birds been seen in a woodpile" Great, thank you, off I marched. When I got there, alas I could see by most peoples faces it didn't look good. I asked one chap had it been seen ....."Yes, showing well up until about 11.35, it was last seen at the back of that logpile". I looked around and there were at least 5 big piles of wood that looked ready for bommy night. Apparently the bird had been photographed by a few lucky souls, but they did ever so well because the bird is Robin sized and needle and logpile spring to mind!!

I waited around and got excited everytime something moved by the logpiles. A Whitethroat kept popping up on top of one of the logpiles causing a sudden surge of adrenaline and twitchers moving their bins around as fast as they could to see if it was the sought after Bluethroat.... alas no, sighs all round. Next it started to rain just to add insult to injury I had the feeling this was not going to be my day. After a couple of false alarms and three and a half hours spent staring into a woodpile, one that I will no doubt see it in my sleep, I decided to give up.

I made my way to the cafe as I had no brekky this morning, so I sat outside the Mereside cafe with a prawn butty and an orange juice that deprived me of £5.25 sighs again. Time was ticking on so I had to make the cross country walk back to Burscough Bridge Station, feeling deflated, I set off. Turning past a large house and a big field, I flushed a Quail, 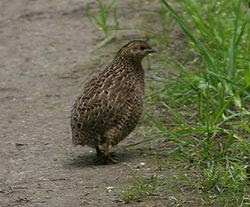 I could not believe my luck, it shot down the track before disappearing into the long grass!! I was chuffed as this is a first for me for the year. At the bottom of Crabtree Lane, I took a left back onto the footpath that leads up to the station. Some Telegraph wires run adjacent to the tracks and a bird was sat on the wires, as I got closer I focussed the bins and it was a lovely male Corn Bunting, 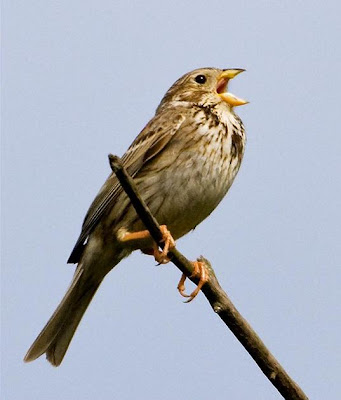 I couldn't believe my luck, a Quail and a Corn Bunting in the space of ten minutes!! It belted out it's song with gusto, I watched it for a full 5 minutes before it flew off over the fields, well chuffed :-) I had been after Corn Bunting down by the barn at Burton Mere Wetlands for months with no luck.

The train back to Southport from Burscough Bridge cost £4 single for a 10 minute journey!! I questioned this with Gupta the conductor (because he looked like Gupta from Only When I Laugh) and he said he does not make policy with regard to fares. I said to him it's £7 return for a 40 mile journey that takes an hour and 15 minutes and you want four quid for a single journey that takes 20 minutes and is 9 miles!! He muttered something unintelligible and thrust the ticket in my hand, so much for customer always being right haha.

Back at Overpool around 6.30pm after 6 different trains, 30 stations and an hour and a halfs walking, am I now a seasoned twitcher?? I doubt it very much lol. Call me a birder any day.

N.B Pics are images from Google, not my own.
Footnote, twitter message from Austin Morley received on my way home..... he had seen the bird and was there early and got a couple of pics.........just to rub it in!! No seriously, well done, the early birder gets his bird.