Due to equipment not being delivered, it was down tools and a trip for myself and Shaun to Delamere Forest for a bit of birding. Delamere, means Forest of the lakes. It has around 2,400 acres of mixed woodland and therefore is the largest woodland in Cheshire. 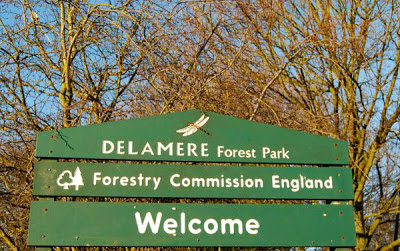 I have not been to Delamere Forest for a while, but was excited at maybe seeing a Crossbill as we had been to Brenig with no joy earlier in the month. Walking along the Sandstone Ridge trail around the forest paths, we saw Wrens, lots of noisy Nuthatches with youngsters and heard a number of Song Thrushes, which is always welcome. We came across an area of path next to a field with some horses in, it was just then that I heard a 'tekk tekk' call akin to a skulking warbler, after a quick scan of the trees, I spotted a small nondescript LBJ which at first glance could have been a chiff or willow warbler, but was keeping itself concealed. We lost sight of it and after spying a family of Coal tits with young... see below in flight 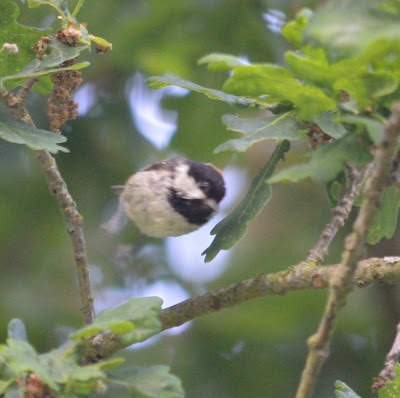 we then heard the Warbler singing..... it was a Garden Warbler. It took a while to locate, but we did manage to watch the bird singing from a fairly well hidden position, but Shaun managed to get a fairly decent photo!! 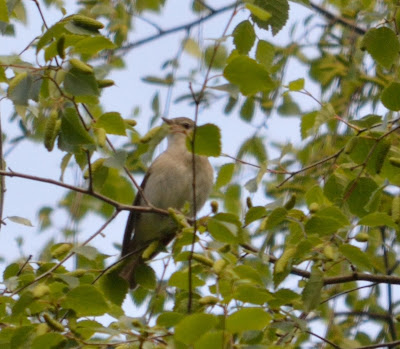 They do sound like Blackcaps, but without the Blackcaps final flourish (I find they are softer on the ear). Great spot and the first of the Year (another tick for yearlist) now a modest 154. Still way behind Austin Morley :( still it's a marathon not a sprint and an enjoyable bit of fun at that.

The visitor centre was closed when we went past and fag ash Lil poked her head out to advise us it was not open until 9am. No tea for us thirsty expolrers then!!

Walking past the nurseries and towards the Ape around activities, we spotted a bird that our friend Scouse Paul has a fondness for and gets very excited when he sees one, we took a picture just for him :) It was in a nest box in a well kept garden. 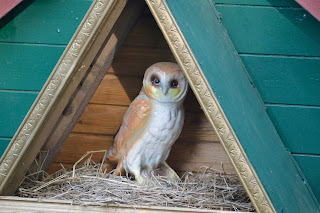 The sound of Goldcrests and Treecreepers is quite high pitched but we did manage to see both species and the Treecreepers in particular were all around the Forest. 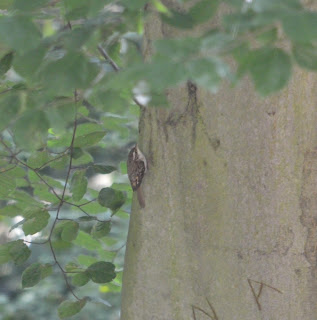 Just a bit further on, I heard the sharp call of some Crossbills, but could not make them out as they were high up in the conifers, despite our best efforts, we never got a look at them.

Black Headed Gulls are noisy birds, but when you have hundreds of birds nesting at Blakemere Moss, the sound can be deafening. 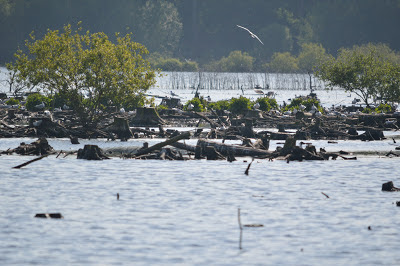 It was decided in 1992 to restore Blakemere Moss as a wetland environment, which was achieved in 1998 by clear-felling the area and then flooding it. The restored lake now provides a habitat for wildlife, particularly birds. 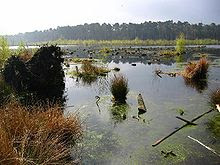 We got a good vantage point on a spit of land that projected out into the lake, the odd Tufted Duck and Lapwing could be seen and a Coot with a couple of youngsters. In amongst the nesting Black Headed Gulls and chicks, we also singled out a Med Gull. A lone female Mallard was left to look after 11 ducklings :]

Getting back onto the path, we spotted a couple of birds high up in a dead tree. Crossbills :) They never stayed long enough for us to get a good look or a pic unfortunately, but nevertheless a welcome tick.

The paths around the forest are undulating in character and hummocks and peatland basins have formed in clearings amongst the trees, some of these due to glacial activity. Now Dead Lake, is one of such areas, but despite it's name is alive with various dragonflies and insects going about their business, it is on one of these lakes, that we hoped to get a glimpse of a Hobby, which is renowned for catching dragonflies mid-flight....no such luck. A red damselfly was spotted nearby. 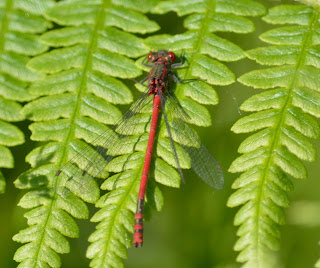 Hunger strikes, so we jumped back in the van and grabbed some sandwiches and a drink from a local store and had a break by the side of Hatchmere Lake. A solitary Great Crested Grebe was out on the water along with the odd Coot. After lunch, we walked through the woods that border the lake, Great, Blue, Coal & Long Tailed Tits were all seen as were the usual Wren, Robin, Nuthatch, Chiffchaff & Willow Warbler. Shaun spotted a Tree Creeper behaving oddly and located a nest with at least one youngster inside, it was wedged behind some old flaky bark on the side of a dead tree and at least one chicks little eye was peering up at us, probably wondering what these two strange creatures were staring at. In order to minimise disturbance, we took no pic and moved swiftly on. The area around the lake was really boggy and Shaun spotted this Common Frog chilling out in the pleasant sunshine. 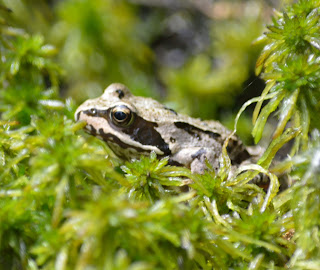 At least three Great Spotted Woodpeckers were sighted and a Buzzard flew through the wood on the way back to the van.

On the way home, we decided to call in at Frodsham Marsh to see what was about and take a look at the silks spun by the Ermine Moth Caterpillar that have enveloped the spindle bushes all along No6 tank. Well, until you see it yourself first hand, it is quite a bizarre sight, here are just a few pictures of these amazing caterpillars..... they had covered the bushes, the trees, the grasses and the fenceposts!! 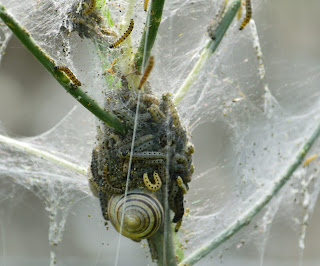 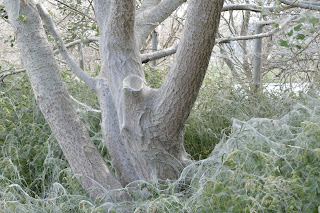 Not a lot else to report, a few Shelduck and Teal on No6 and many Whitethroats on the adjacent paths. June is a quiet month, but all in all, not a bad mornings birding.

Here is a link with more info for anyone wanting to visit Delamere Forest :-