Shaun picked me up around 6.15am and after doing some watering at his allotments, we headed off to Frodsham Marsh. We decided on a different approach this morning and went up towards the Weaver bend and Marsh Farm. Wren, Rook, Carrion Crow and Chaffinches were the first birds seen on the way up towards the Weaver bend. A Chiffchaff sang it's repetitive song from an overhead wire, much easier to id that way (thank you) 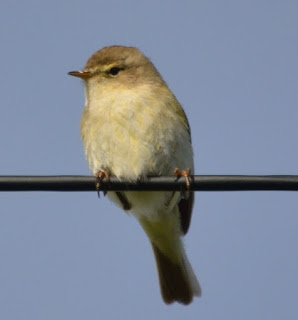 Sedge Warblers seemed to be all over the place and the mechanical churrs and clicks and whistles had an almost hypnotic effect as you walked along. Great birds all the same and this one came into view very obligingly for a nice photo :) 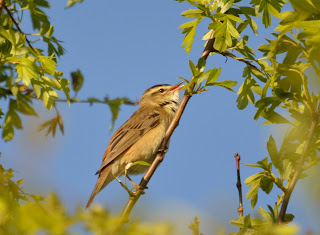 Upon arrival at the Weaver bend, we could see Canada Geese with Goslings, a solitary Oystercatcher, around 20 or so Shelduck and a few Tuftys. Overhead a pair of Buzzards put on a great display for us and showed some very agile moves. 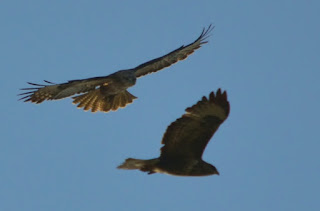 It was very quiet on the way up to Marsh farm, but right at the corner before the cattle grid we came across a large flock of Linnets, these two hung around on the wires just long enough for Shaun to get a quick snap. 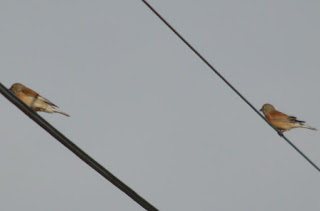 A bonus Lesser Whitethroat was spotted before darting back into cover and a Tree Pipit ascended up singing it's beautiful song. A couple of Skylarks could be heard in the distance and upon arrival at the M.S.C. (Manchester Ship Canal) where the shooting club cross over in their little boat, a family of inbred ducks eyed us warily before swimming out onto the canal. 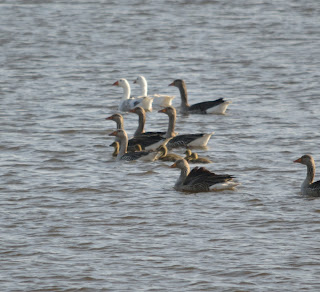 A Great Black Backed Gull made its way up the canal and lots of Swallows and Swifts were hunting right on the far bend. A Meadow Pipit was feeding around the cattle trough, before flying off into the long grass. 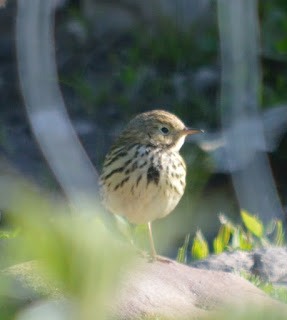 The wind was getting quite blustery now so we decided to head up towards No 6 tank and see what we could spot up there.

Well, it was the quietest I think I have ever seen it, a couple of Mute Swans, some Tufted Duck and the odd Mallard were out on the water. A Kestrel hovered in the wind in the distance and did so effortlessly, a joy to watch. A lovely Goldfinch flew onto a nearby post and gave us a tinkling song before flying off like a bolt of lightning, blown on the strengthening winds. 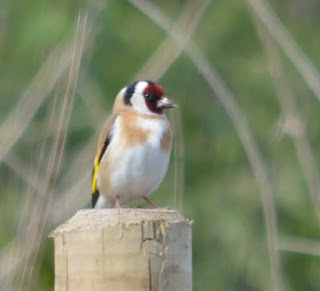 A Chaffinch was pinking noisily and the reason soon became apparent as it wanted us to move on quickly as it obviously had a nest nearby as it had a beak full of insects!! 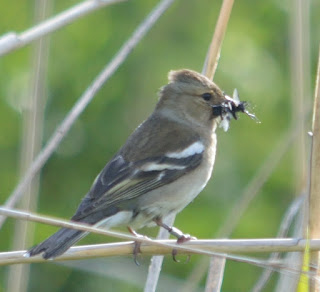 A couple of Ringed Plovers were on No 6 tank and then we got a brief glimpse of a Hobby, before it flew quickly out of sight, our 1st of the year :) A Little Grebe and some Tuftys were on the pool before No 4 reedbed and we managed to get a shot of the Male Marsh Harrier as he hunted above the reeds. 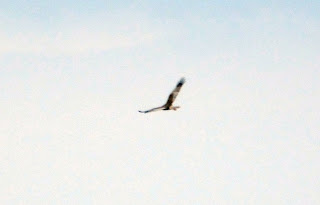 On the walk back to the van, we added a couple of Reed Buntings to the list and then bumped into an old friend who advised us of the location of the Peregrine box at Vauxhalls in Ellesmere Port, so we decided to head off to see them for a bit.

Upon arrival at Vauxhalls, the box was quite a distance away and unable to go into the car park we had to observe from the Private Road. One adult was on top of the box and one was inside with the three chicks. We managed to get a photo after one of the adults had flown off, but it is not the best shot :- 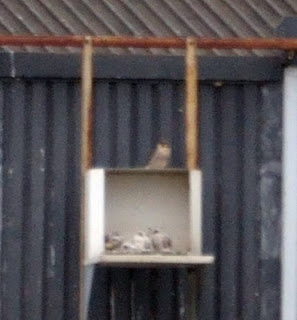 Amazingly, we spotted two Marsh Harriers over Boostings Wood, this is the first I've heard of them being in this area and all the more exciting due to the fact I only live about 10 minutes away :-) we tried to get further views by cutting through the Wood, but could not relocate. Blackcap, Goldcrest and Song Thrush were heard and a Common Sandpiper was spotted on the far bank of the M.S.C.

We got this shot of a huge tanker was being pulled towards Eastham Locks by a small tug boat, before calling it a morning and heading home, just in time as the rain started about 12.15. 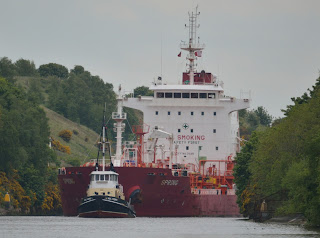