Finally, Saturday had arrived and it was time to set off for RSPB Conwy to meet Alan Davies of The Biggest Twitch fame for a days birding. Myself, Shaun Hickey and Paul Jason set off from Ellesmere Port around 6.30am. En route we stopped for some diesel and spotted Chaffinch, Goldfinch and a Collared Dove nest building. We arrived at Conwy around 7.40 and watched hundreds of Hirundines chasing insects around the reserve buildings, Swifts, House Martins and Swallows were swooping and calling, a fantastic spectacle. 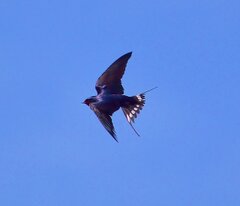 Alan arrived at 8 and after meet and greets we were off. A quick scan of the Estuary at the front of the reserve produced Shelduck, 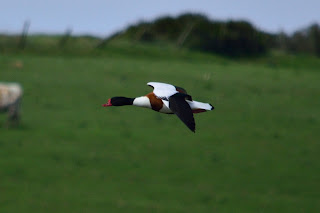 Oystercatcher and some nesting Grey Herons and Little Egrets in trees on the bank opposite. A Common Whitethroat flew up whilst singing before diving down into some thick gorse, suddenly a male Peregrine flew over and gave us great views, what a start :)

Our next stop was South Stack, on the way the skies went black and the rain was relentless, our mood sullied somewhat however we were sure it would blow over. Upon arrival the rain had blown over, however the wind was quite fresh and the waves were crashing against the rocks. A flock of around 50 Goldfinches flew overhead, migrants most probably. Looking out past the lighthouse we saw Gannets, Manx Shearwaters, Fulmars and Kittiwakes out to sea. On the rocks we had excellent views of Guillemots and Razorbills nesting. We also saw a solitary Puffin bobbing up and down on the waves below. Great Black Backed Gulls and a Shag were sitting not far from each other on the cliff face. Just then a pair of Ravens flew over, big birds!! All in all a stunning place that literally took your breath away. 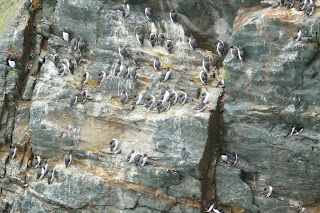 It was back in the car and a short hop around the corner we were out again and Alan was trying to flush small birds with a bit of pishing, not much success, but he did flush a Hare which legged it right the way up the field. Some Greylag Geese and Pheasants were spotted and what we were informed was a hybrid, but looked like a Hooded Crow.

Next we drove into Holyhead for target bird Black Guillemot. We were not disappointed as we had no less than 11 birds in the harbour. We were informed they were nesting in the walls below an old white boat, seems a curious place given the abundance of great nesting sights. Fantastic little birds, with distinct white wing patches and bright red legs :) 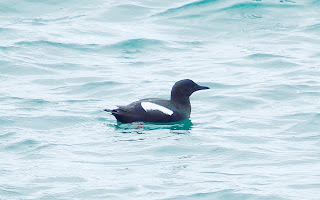 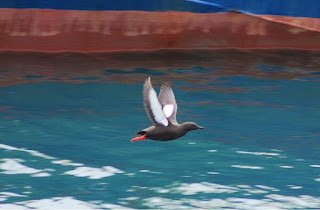 The ferry was pulling out of the harbour like a monstrous Whale Shark with it's front end gaping. 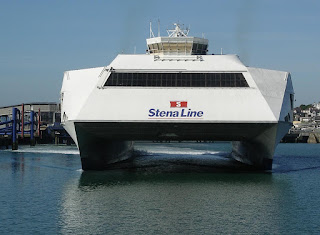 Just around the corner was the Alaw Estuary so we headed off to see what waders we could encounter. Down a public footpath through an Iron Gate and we were in a lovely bay with great views of Red Breasted Merganser. A Buzzard was just hanging in the wind over some dunes a seemingly effortless task, oh to have wings! The tide was coming in fast and with a strong North Westerly we had to be quick, Dunlin, Grey Plover and Bar tailed Godwits were added to the ever growing twitch list, it was around 11am and we already had over 50 species. 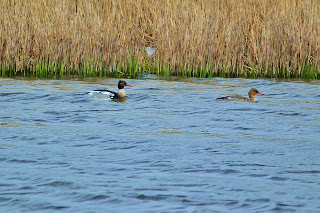 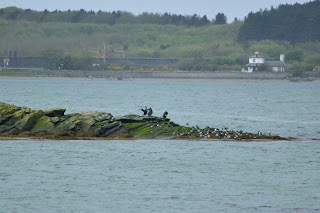 A brisk walk back to the car to evade the incoming tide a quick coffee and we were off to RSPB Valley Lakes. Driving past the airfield and the Gate Guardian 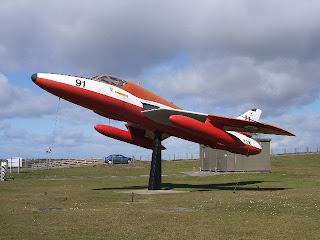 we could see the skies had brightened up but we were going to be occasionally dodging some pretty heavy showers. In the car park, the lads were scoffing again, whilst me and Alan were listening to Sedge, Reed Warbler, Reed Bunting and Willow Warbler. I spotted a Kestrel in the distance and Alan assured me it's a rare sight on Anglesey these days :( Well, what a lovely little spot, a lake surrounded by reedbed and scrub made this a great habitat for birds, we saw Pochard, Tufted Duck, Great Crested Grebes, Canada and Greylag Geese and Mergansers. What at first glance appeared to be a Sparrowhawk flying fast over the reedbed was in fact a Cuckoo, our second sighting of this elusive bird in a couple of weeks. It perched on a reed and then flew down and caught a grub, before the heavens opened and we had to head back to the car :( On the other side of the lake we saw Little Grebe and Shoveler, the twitch list was now up in the high 60's. 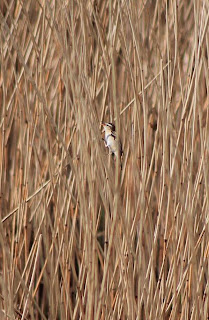 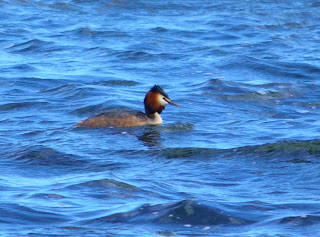 Next we headed back towards Penrhos Nature Park in Holyhead and Petes Burger Van!! I was peckish by now and as it was after midday I needed feeding. Well, the double Cheeseburger was costly at £3.70, but it was very tasty, even if Pete overdid the amount of onions a bit!!!! Paul and Shaun had been munching away all day on various snacks including Ham and Egg Sarnies, Pork Pies and Chocolate, but they still had a burger and a bacon and sausage batch, Jeez.

Sandwich Tern was added to the list flying over the bay, as was Robin, Great Tit and Blue Tit on the feeders Pete has put up behind his Van. A Song Thrush was heard in the distance. 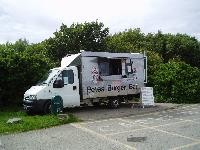 After refuelling, we headed off to Cemlys Bay and Lagoons, Alan had assured us we would get further species here and may even see the Roseate Tern in amongst the other Terns at their breeding colony in the Welsh Wildlife Trust reserve. What a racket when we arrived, but great views of hundreds of Arctic and Sandwich but not many Common Terns, which Alan said was unusual. In amongst the nesting Terns, were at least 4 Med Gulls. In the surrounding area, we added Meadow Pipit and Pied Wagtail, we were scanning the gorse around the old building checking for migrants, it was the place the Golden Oriole had been spotted about a month ago. Suddenly a Stoat appeared and ran along the fenceline before dropping out of sight :) 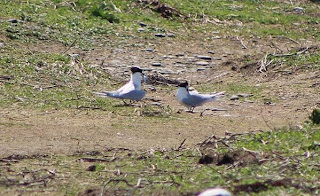 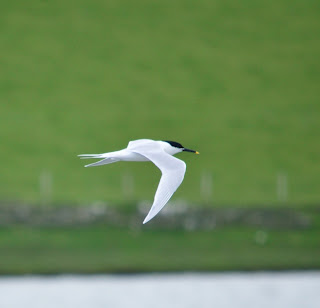 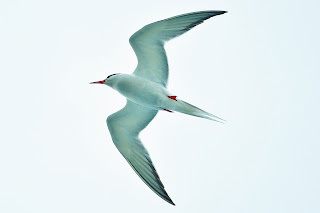 Marvellous spot, I could have stayed all day, but you guessed it, the heavens opened and we just got back to the comfort of the car in time :) The showers were short and sharp and ten minutes later we were back out and walking up a nearby country lane to check for migrants, we saw Linnets, Wheatear and Stonechat all in one field. On the way back, we spotted at least a dozen Ringed Plover that had dropped in. The twitch list was now in the 80's and we still had birds to get at Conwy!! 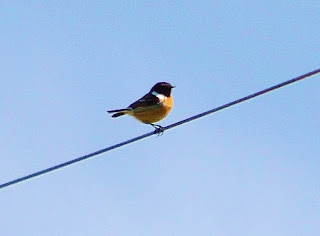 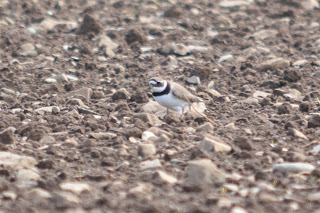 Time was ticking on, so we headed back to RSPB Conwy, the reserve were Alan had been manager at for over 7 years!! He may know where to find a few birds there then ;) It was around 4.15pm so we had time to  add a few species, a beautiful male Bullfinch was on the feeders right at the front of the reserve. 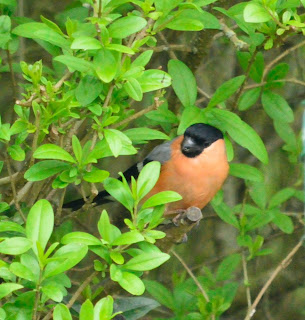 At one of the hides, we spotted a Little Ringed Plover on nest, a White Wagtail and a Yellow Wagtail and also added Lapwing which curiously we had not seen all day!! Sadly, it was time to say goodbye to Alan, but his time, expertise and helpful assistance throughout the day had made this a brilliant day out. We all agreed we would be using http://www.thebiggesttwitch.com/ again in the near future. 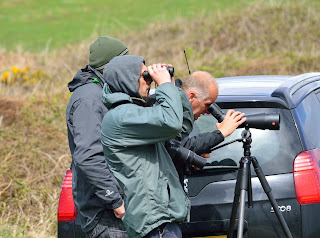