A lovely Spring day and what better way to start it off than an early morning visit to Burton Marshes. It looked like being a glorious day and their was an early morning mist rising over the Marsh. The Sheep that were on the Marsh, had now been relocated and the path had been scrubbed and brushed up (no more poop). On the farm on the left as you walk down towards Burton Point, the Sheep seemed rather lethargic and Shaun noticed a dead lamb that the Corvids had taken a relish to and sadly as all scavengers do, removed it's eyes. 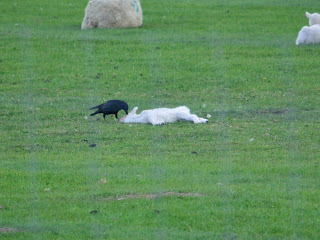 On further examination of the fields, as we often do for Pipits and Wheatear, we noticed several dead lambs and wondered what had caused their demise? We were sure that by the time we had walked back later on, the farmer would have been out and about and removed the carcasses, sadly we were wrong as over two hours later they all remained :(

Approaching the cattle grid, we could hear Gropper, Sedge Warbler and Reed Warbler in full flow. The mechanical sounds are somewhat hypnotic and you have to stop and listen to see if you can seperate the different birds by sound. I did my Bill Oddie impression mimicking Sedge, then Reed and got some odd glances from Shaun, ahem, time to move on!!

A lovely female Wheatear flew down to the sandstone wall by the sheepdip pens and happily posed for a picture. 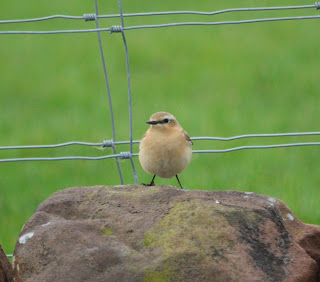 Waking further up towards Burton Point, we spotted the duelling male Whitethroats in their usual corner, but they were flying around so quickly, it was difficult to get a shot of them. As it was bank holiday, the path was in more use today and numerous cyclists and power walkers were out in force. No Shorty could be seen, but noisy Oystercatchers flew overhead. Crossing the wooden footbridge towards the rear of Inner Marsh Farm, we scanned for the Little Owl, but could not locate him today. Looking out over the pools at IMF we could see a flock of around 60 Blackwits and some Lapwings an the banks in the background. After a few minutes walk further up the track I turned and noticed something had spooked the Blackwits and they were now up and wheeling around in predator evasing motion. Peregrine!! No kill, but the bird flew back out across the Point and disappeared over a bank out onto the Marsh.

A small Palmate Newt was again crossing the tarmac path, so minute it was very nearly stepped on. Some Tufted Duck and Shoveler were on the far pools to the right of IMF and some Canada Geese were in the fields. Some Linnets twittered away and flew down to the grasses by the army firing range, no sign of the soldiers today, even though the red flags were flying.

Time to head off to Burton Mere Wetlands, but on the way back we saw quite a few Linnets and managed to capture these four sitting on the fence. We talked about Cuckoos and how for me it had been years since I had seen one, we both agreed they were heard rather more than they were seen!! 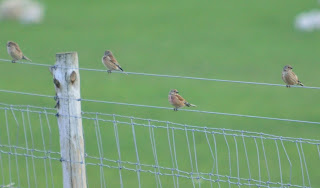 A young rabbit also cast us a curious glance before making it's way back to the safety of the undergrowth. 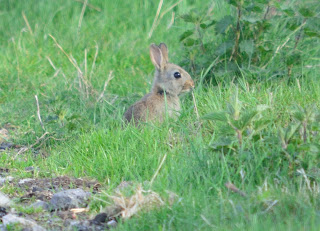 Upon arrival at BMW, we noticed a few more cars than usual and then remembered it had been the Dawn Chorus 5am walk. Usual suspects were out on the scrape, Black Headed Gulls, Blackwits, Avocets still sitting on eggs (can't be long now before the patter of tiny feet), Redshank and on the pool adjacent to the  reception centre, one of my favourites a Little Grebe or Dabchick as they are also fondly known, they really are quite colourful and expertly dive down for small fish. 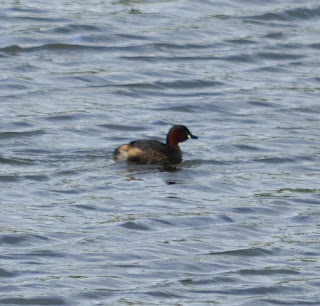 The Canada Goslings had moved over to the irrigation channel so were no longer on the back pools, however we had excellent views of a Common Tern which was expertly diving down and catching small Rudd, which was a joy to watch and a first for me at The Mere. Shaun managed this cracking photo :- 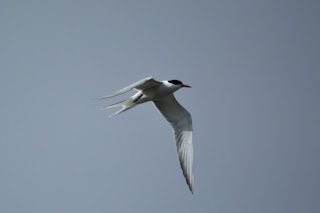 A Blackcap could be heard in the nearby wood along with the cacophany of gurgling noises that we have come to expect from the breeding Little Egrets!! Bees were buzzing, insects were swarming and the butterflies were out in force on this fine morning, including a glut of Orange tips, like this one below :- 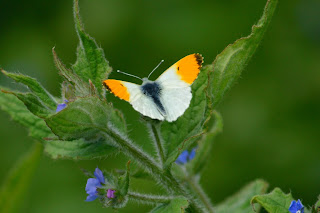 Just down the steps and turning the bend towards Marsh Covert Hide, we could see the Mute Swan still on her nest, no sign of any cygnets as yet. Both Reed and Sedge were in full voice and a Sedge Warbler was rattling away and shimmied up a reed stem to give Shaun his first chance of obtaining a pic :) 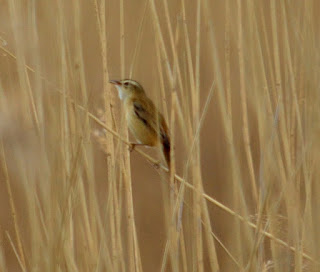 Only a couple of people were in the hide, so I opened the windows and immediately scanned the pool looking out to IMF. A lovely summer plumage Dunlin was feeding near a Spotted Redshank very close to the hide. Further out some Shelduck were fighting and both males had their beaks locked and were going for it big time. Scanning the little bays as I do, I noticed a wader moving slowly across the grasses by the edge of the water, it was a juvenile Ruff and another tick for me for 2013 :) Just then a guy came in the hide whom I have come to recognise in and around the reserve and he rushed to the end of the hide, set up his scope rather frantically and proclaimed Cuckoo!! I had cried it in again, as so often works in the birding world, you moan about what you haven't seen and hey presto, like the shopkeeper in Mr Benn, they suddenly appear :)

We watched the Cuckoo on a reed, it's unmistakable shape and slatish grey plumage along with barred chest all being taken in. It kept dropping down onto the grass, vanishing out of sight, only to reappear with a grub or a worm in it's beak, Marvellous, another tick for 2013 bringing my yearly total up to 137. Shaun managed a quick capture of the Cuckoo before it dropped down to the ground out of sight :- 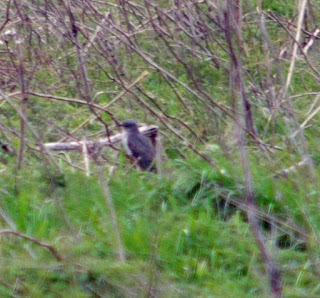 Time was ticking on, so we made our way back to the car park. A Song Thrush was belting out a powerful and beatiful song and small birds were all around the feeders, Goldfinches, Chaffinches, Great Tits and still the odd Siskin. 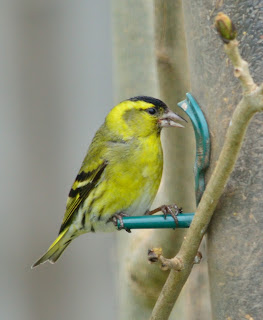 All in all, a very good mornings birding and next Saturday myself, Shaun and Paul, head off to Anglesey with Alan Davies and Ruth Miller http://www.thebiggesttwitch.com/  for what I'm sure will be a fantastic days birding, we all can't wait, please weather stay kind!