After some quite heavy April showers, I got a message from my mate Shaun saying he was going down to Burton Point for a few hours after tea, so I got my gear together and we headed off. It was still drizzling slightly but the prospect of clearer skies according to the Met Office App boded well!

Upon arrival at the bottom of Station Rd and the entrance gate to the marshes, we could see that the farmer had now put the sheep out onto the marsh. The new tarmac path was covered in sheep droppings, so after a few steps like Jack Nicholson in "As Good As It Gets", I gave up trying to dodge the mess and carried on regardless, besides, I was birdwatching, not watching my step. Not many cyclists, or dog walkers tonight, the latter will REALLY have to abide by the "Dogs On Lead" signs now the sheep are out!!

If any of you have walked the path up towards Burton Point, you will know the area I mean just before the 1st Cattle Grid, you have farm hills on the left and a lush reedbed on the right. In the reeds, we could hear Sedge Warblers and Shaun spotted this lovely Whinchat perched on top of a bush in amongst the reeds. 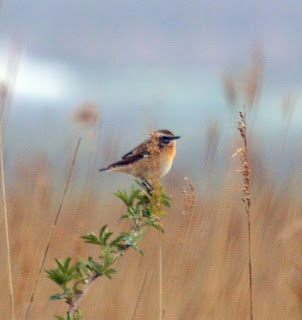 A female Whinchat was admiring him from the opposite banks ;) 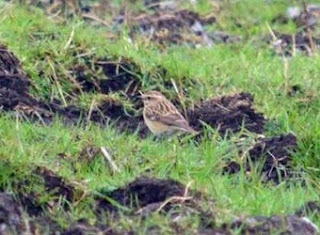 The reedbed was a hive of activity and we also spotted male and female Stonechat. The Sedge Warbler was skulking at the bottom of the reeds and kept hopping around like a mouse on speed. Despite Shauns best efforts to get a photograph it was all in vain. The sun was trying to break through the dissipating cloud layers and golden rays beamed down over the Welsh hills. Plenty of Wheatears were still showing on the slopes opposite and were taking a keen interest in and around the rabbit burrows. Here's a pic of a lovely female. 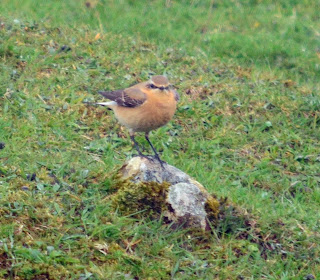 Walking past the cattle grid and further on up towards Burton Point, there was not much activity in the gorse bushes that line the sandstone facade, however in a clearing further on we spotted two Whitethroats, both males and were in a spat over territory. We watched these chase each other around the thicket for a good 5 minutes, then Shaun spotted a leg of lamb (no he was not still dreaming over Sunday lunch) this was a half eaten leg, most probably taken by a resident Fox !! 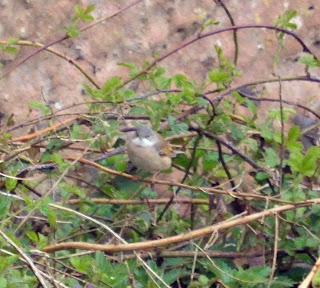 As we approached the dip just before the entrance to the M.O.D firing range, I scanned the wood up on top of the hill at Burton Point, in the hope of locating the Little Owl we had seen a few weeks earlier. Well, needle and haystack, however bingo!! I spotted it, tucked in against a tree trunk sheltering from the North Westerly wind. I told Shaun and he said "How the hell did you spot that?" I replied "Swarovski mate, see the unseen" there is no way I would have picked the Owl out with the naked eye.

Crossing the second cattle grid and stepping onto the wooden bridge that heads up towards the back of IMF (Inner Marsh Farm) we encountered a young couple who were out birding/nature watching and had some interesting shots of what appeared to be small lizards on their camera. Well from the shots on the camera, they looked quite big, I did not realise what we would find later on would be between 10 & 15mm !

After showing them the Little Owl which they were very excited about, we headed up towards the IMF pools in the hope another rarity may have dropped in. Looking over the fence and the railway line, you can see the pools and I spotted Avocets, Black Headed Gulls and a Spotted Redshank well on the way to full Summer Plumage. Here's a shot below :) 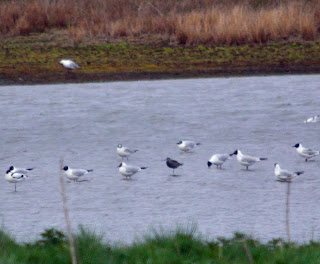 Quite a few Little Egrets and Grey Herons could be seen squabbling over in the distance at the Heronry at Hadden Wood, some Shovelers were on a pool further up and some Blackwits were calling high overhead. It was then that we spotted this small lizard looking creature on the tarmac path. I had no idea what it was it was that small, when I got home I did look it up and from the feet thought it more a salamander or newt. A friend says it's a very young Palmate Newt. If anyone else knows please feel free to comment :- 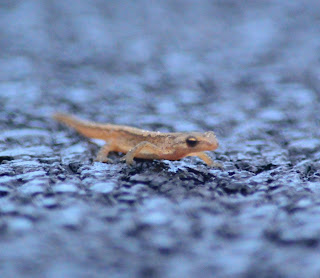 I love this place, you just never know what's around the corner. Alas, Hen Harrier and Short Eared Owl appear to have departed north to their breeding grounds on the moors, but what a start studded crowd we have been graced with for the spring/summer months ahead :)

On the walk back we heard Grasshopper Warblers reeling and saw some Meadow Pipits flitting around on the grassy banks. 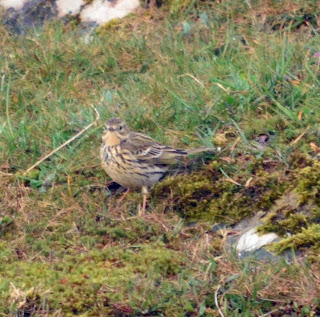 Heading back towards the car as the light faded, I reflected what a truly great place this is at anytime of the day, but even more so it seems at first light and late evenings. A big credit to RSPB reserve manager Colin Wells and his staff of interns and volunteers for making this and Burton Mere Wetlands/IMF great places to visit.

I look forward to visiting again soon, but also during the pearly mists of summer dawns, when the temperature has gone up a few degrees!! Tonight it was seriously chilly.