Decided to go for a look around Frodsham Marsh this evening with my mate Shaun . Parked up by the field next to Lordship Lane, where the model flying club play out. Scanned the ploughed field looking for Yellow Wagtails but could only see a few Wheatear dotted about and some Shelduck further back. Walking along Lordship Lane, the reedbed was very quiet and just one Reed Bunting flew out.

At the top of the rise and after me moaning about not seeing a Swift this year, two flew over No6 tank at about 5.45pm, we managed a quick snap but it's very blurred (sorry) but unmistakable shape :) It really does work if you cry about not seeing a species, I find it works anyway! 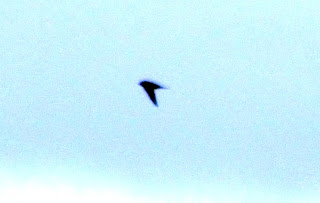 Further up and upon approaching the No4 tank, we got a distant glimpse of the Marsh Harrier, but was quite a bit away to get a good photo. The long pool that splits No3 & No4 tank normally has a few surprises, however tonight there was just a few Tufted Duck and two Greylags on No3 tank along with the White (domesticated) Goose! 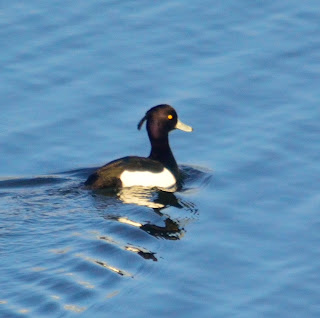 Heard plenty of Pheasants calling tonight as usual and they often strut out onto the footpath cast you a curious glance and then disappear into the undergrowth. Walking further on we got about 250 yards and looked back to see the Male Marsh Harrier and two female Marsh Harriers displaying and then being mobbed by a Raven (sods law) so we decided to have a walk back but yes, you've guessed it, they vanished again!! We waited for another half an hour, heard Sedge Warbler calling and managed this snap of a Whitethroat in the bushes. 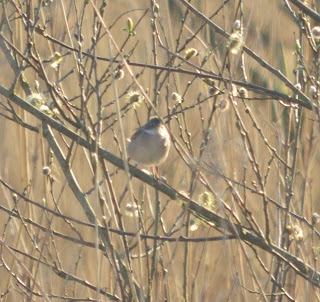 Walking the path between No5 & No6 tanks, we got views of Meadow Pipit, Lesser Whitethroat and some more Whitethroats. A reed Warbler started up close by and Shaun took a distant picture of what could have been a Tree Pipit but was hard to see properly without a scope :- see below 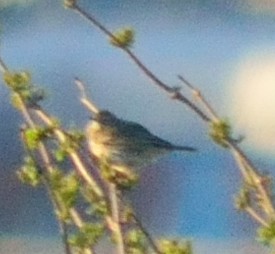 A couple of Buzzards were fighting the usual battles with the Carrion Crows over No5 tank and a few Canada Geese could be seen further out. Looking out over No6 tank, we had views of over 200 Shelduck, a few Teal, Gadwall, Cormorants and Moorhens. Here's a shot of a couple of Shelduck in a muddy splash landing. 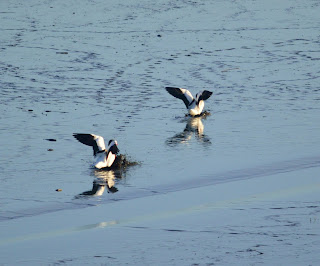 Plenty of Swallows were flying over and walking back towards the Van we saw Linnets, Reed Buntings and a very noisy family with about 6 dogs yapping away :( light was drawing in, so next time we go, we may take a look up at the ICI tanks and by the Weaver Bend. Finishing on a sad note, we had heard about a Long Eared Owl that had been spotted earlier in the Year in it's roost up by Ince. We had on previous occasions, tried to locate but with no joy. Sadly a friend of Shauns, found a dead Long Eared Owl in the kerb on Ash Road, Elton, presumed hit by a car or lorry :-( 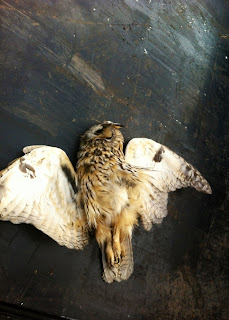 Frodsham Marshes really is a gem though to go Birdwatching and a group of dedicated people do a daily blog http://frodshammarshbirdblog.wordpress.com/ these guy's do a tremendous job, so please go visit soon and stick to the paths and observe good fieldcraft at all times. I finish off with a Marsh Map. See you soon. 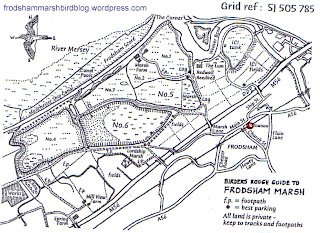