After the mini tsunami of 5th December and high tides of 3rd January, this forecasted 10.5 metre tide was not one to be missed! The day started off nice and bright but cold with some early morning ice. I got the number 272 bus into Parkgate and arrived around 10.15am and after setting up my scope, spied a few Golden Plover, some Black tailed godwits and Curlew at the very bottom of Station Road by The Old Quay pub.

A ringtail Hen Harrier was being mobbed by a Crow and had spooked quite a number of Lapwing who were wheeling up into the air in great clouds! 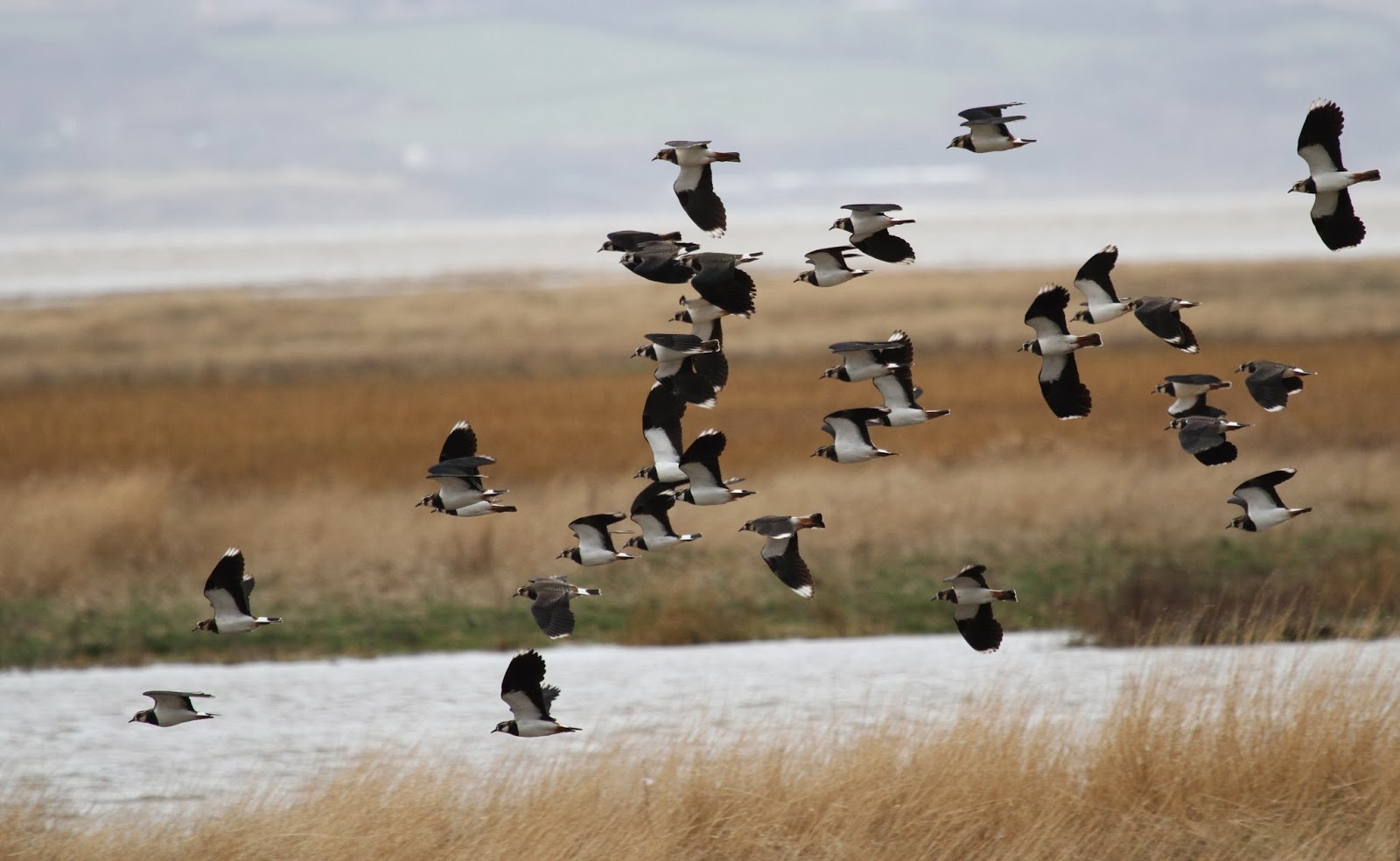 After about ten minutes of having my hands freeze (forgot my gloves) I decided to walk further up The Parade and stopped at the Donkey Stand where the RSPB were set up and also Jeff Clarke was giving a guided talk on behalf of Cheshire Wildlife Trust. (a very animated one for those that know Jeff ) :-) After looking out over the pools and seeing yet another Hen Harrier and a hunting Peregrine, I decided to walk up to the Old Baths Car Park to my usual spot.

On the way past The Boathouse pub I spotted small finch flocks which included Goldfinch, Chaffinch, Linnets and Mipits and Skylarks. They were feeding in the tide wrack and also included a lovely Stonechat and numerous Pied Wagtails.

It was very busy as expected at the Old Baths CP and I bumped into Heather & Findlay Wilde so set up shop by them with scope etc. Fin had spotted a Pintail out on the pools and we also spotted a Black Headed Gull (with full hood) prob a young bird (1st Summer?) who retain the hood even in winter. 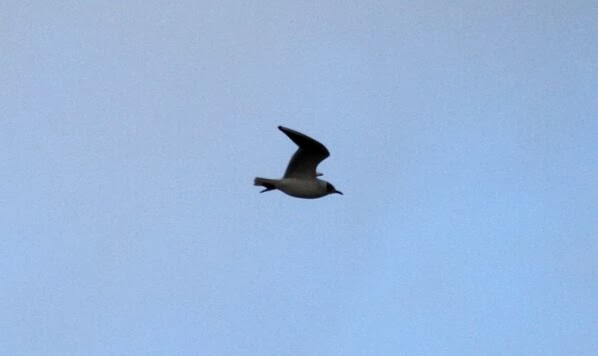 Lot's of Pink Footed Geese were out on the marsh and were becoming more airborne as the tide made it's way closer in. Shelduck, Oystercatcher, Little Egrets and Cormorants could be seen in fair numbers right on the edge of the incoming tide. One or two Hen Harriers (ringtail) were hunting out on the marsh and big flocks of Redshank were making their way across the marsh whistling their plaintive cries as they went along before landing on pools in front of us. 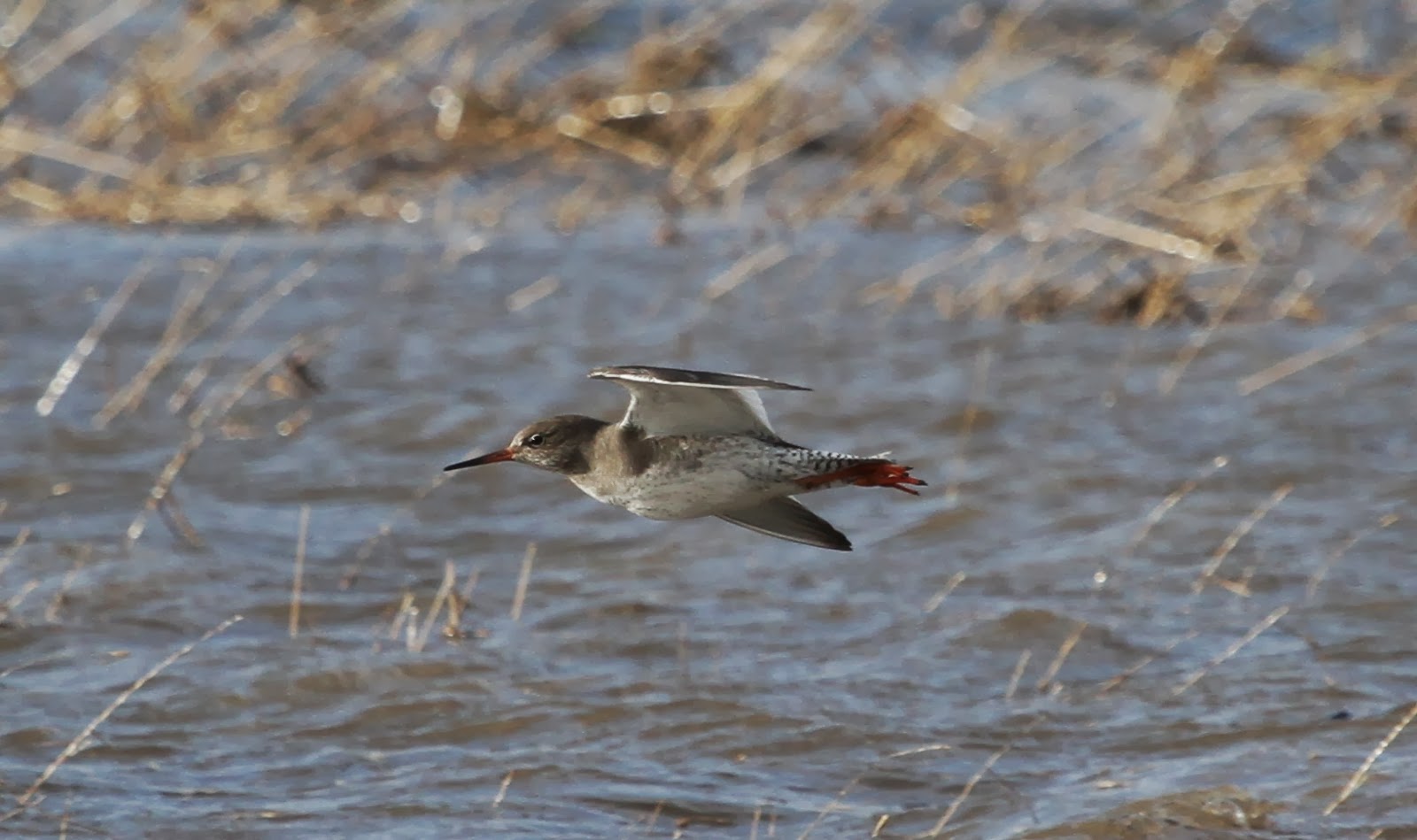 Quite a few Curlews were being disturbed as well and a group were huddled together on a raft of vegetation as the tide sailed past them!

I mentioned that we should begin to see the Short Eared Owls soon and I managed to pick one up right out on the waters edge flying low. Then another flew into sight in amongst the gulls as it flew high then low across the waves in amongst a few Canada Geese.

Heather & Findlay were busily clicking away with their cameras as the tide raced in towards the wall. Nowhere near as dramatic as Decembers surge, but did reach the wall and not one Water Rail was spotted coming out from the marsh! Nor for that matter any small mammals which I fear have sadly been depleted with previous months high tides!

The wind was becoming quite strong but thankfully the rain that was forecast had not materialised. Findlay had munched his way through several baguettes in between watching and I was now becoming hungry! A Sparrowhawk flew across in front of us and put up all the Mipits and Skylarks that were busily feeding on the floating rafts. 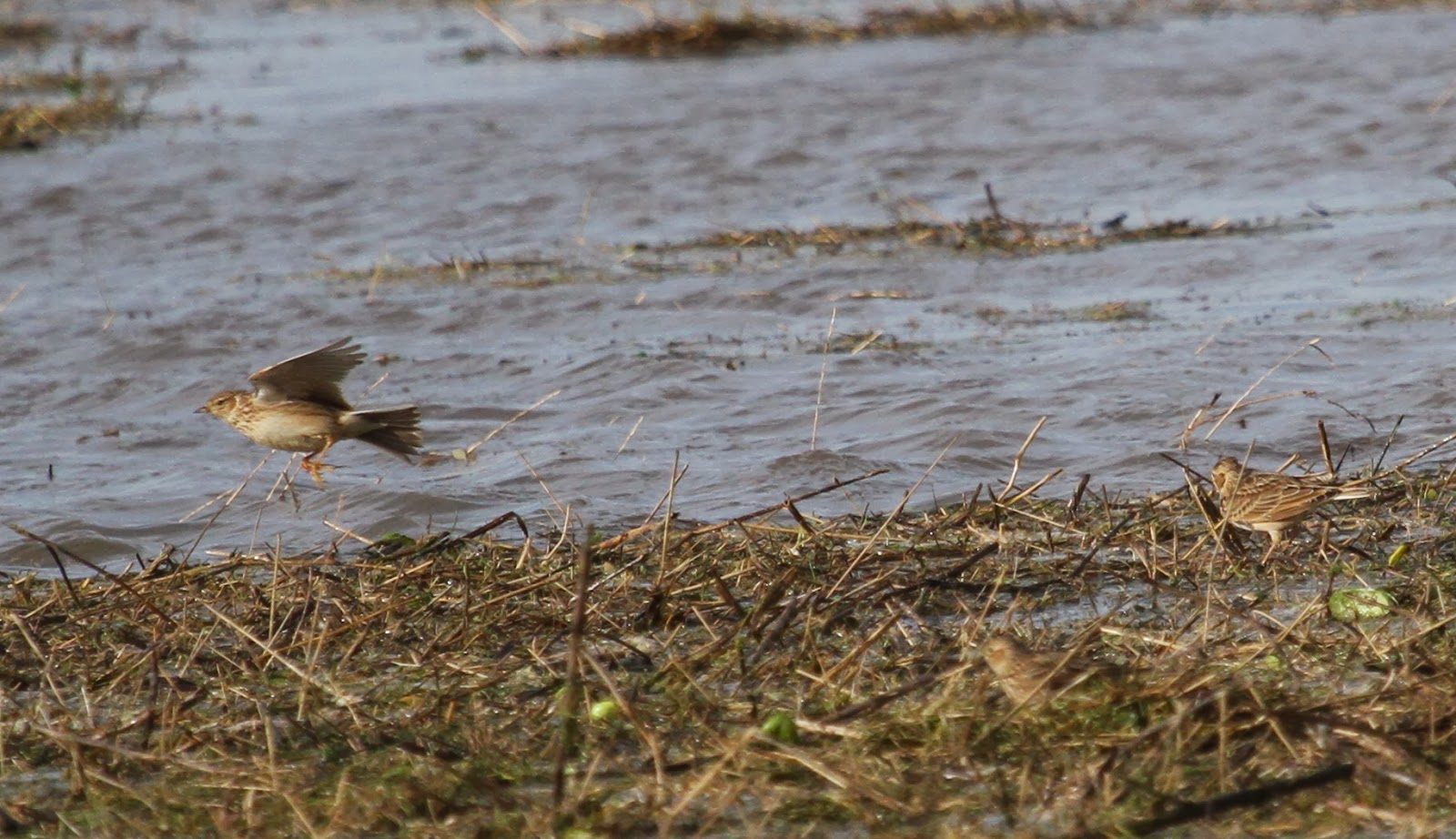 It seemed to be getting colder so we decided to call it a day and see what we could spot on the way back to the boathouse car park before the rain arrived. Just then a female Kestrel flew across in front of us looking for a quick meal and landed close by. 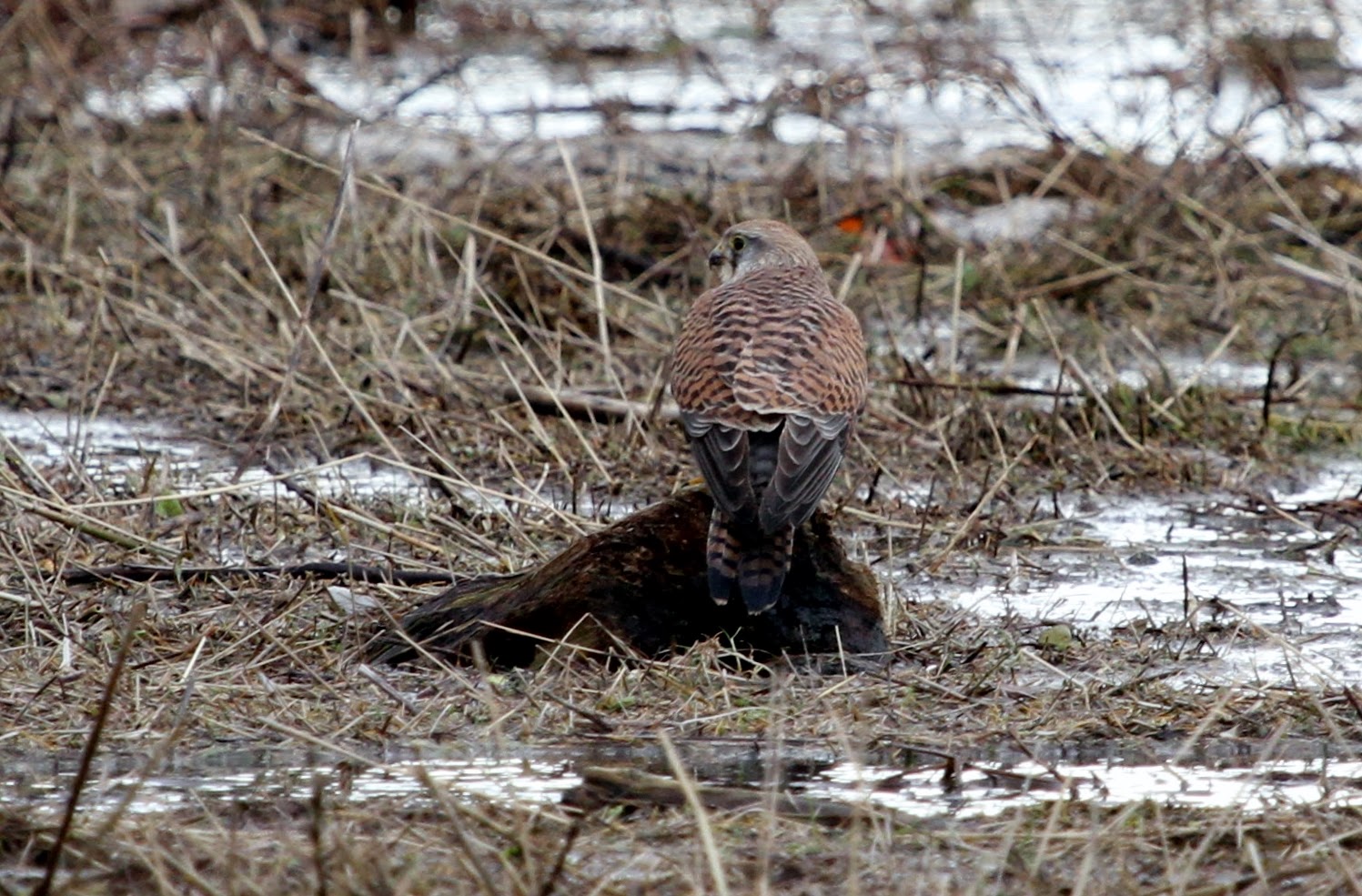 A very cold and frightened looking Water Rail was spotted close to the road in amongst some vegetation and was well camouflaged, the first Rail we had seen all day! 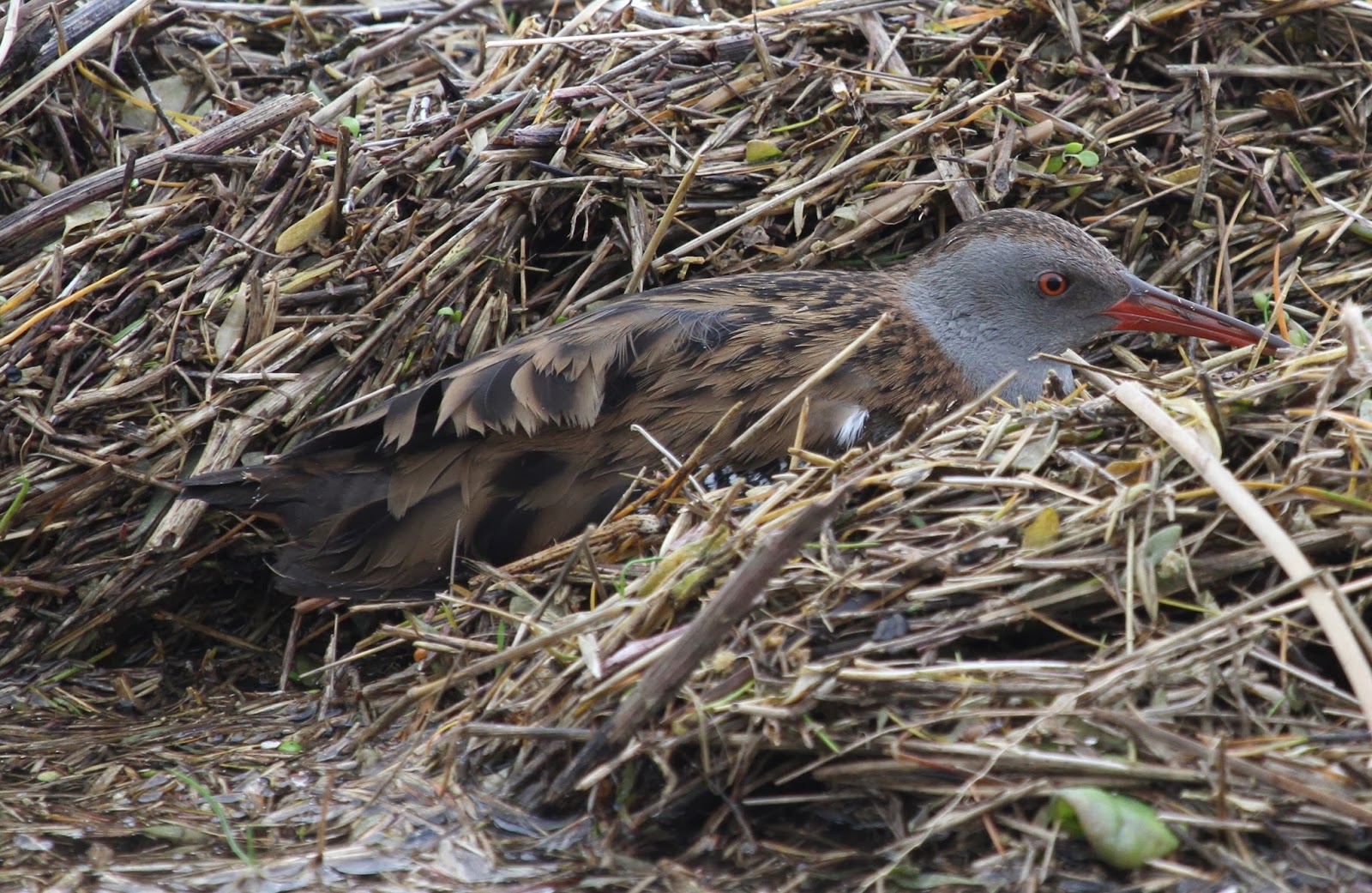 Finally and also looking very afraid, wet and miserable, we spotted a Fox sitting by the wall of The Boathouse Pub, poor thing could probably smell all the pub food cooking as well!! 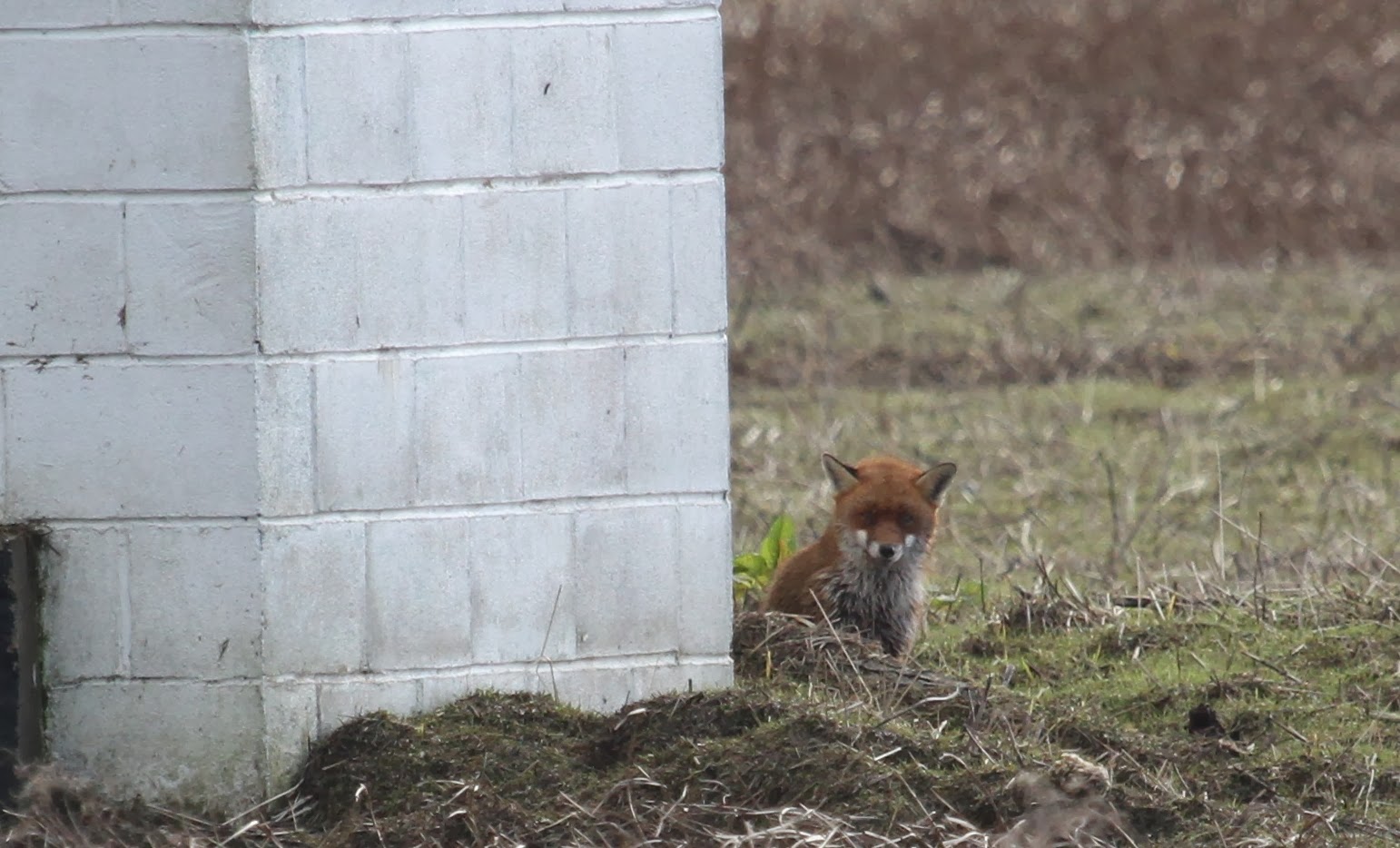 I had managed to bum a lift home from the very kind Heather & Findlay and I even got a delicious cup of Oxtail soup as well, just in time before the rain started to pelt down.  :-) Was very nice to see them again.

All in all, another very good birding session at a fantastic venue.