Hello and a very Happy New Year to all my birdy friends and fellow bloggers :) Today I was off out to Burton Marsh early morning to meet up with Shaun & Paul. Weather forecast was not good with the occasional squall and strong winds, however with low pressure dominating the UK and Environment Agency warning off high tides and storm surges, it would be good for viewing the birds, so that's all that matters.

Upon arrival at Burton Shaun spotted a Merlin which flew low down and along the track by Burton Marsh Farm. It then decided to start to rain, but it only lasted a few minutes and then we had a look to see what we could see in the tide wrack at the bottom of Station Road. Robin, Wren and Meadow Pipits were all busily feeding away and then we spotted the Siberian Chiffchaff :) This bird has been around since before Xmas and was looking in very good nick considering the appalling weather we had been having. At one stage it was in some brambles so close to me I could have reached out and touched it!! 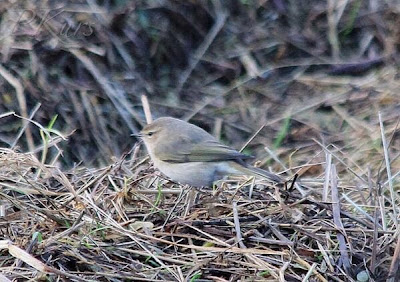 Paul then spotted a Wheatear, which we had heard was around but still unusual to see and a great January tick. 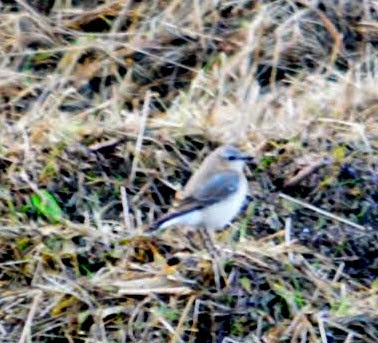 Quite a few Stonechats were flying around and we noticed one lone female that looked unusual, it looked lighter than the other pair that we were watching and when it flew on a nearby fence it appeared to have a plain rump (Eastern), however after reviewing the photo's I got e.mailed from Shaun & Paul, it's definitely the norm Stonechat as you can just about make out the specks on the rump. Here are some pic's taken by both Shaun & Paul :- 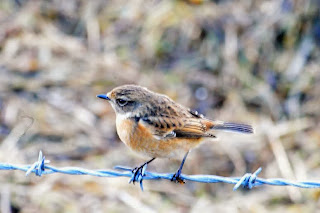 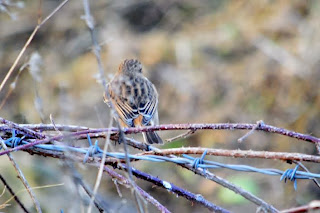 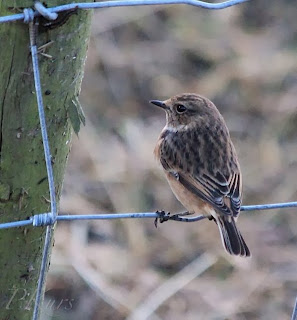 As you can see, light can play tricks and these birds were fairly active, with Buff Bellied Pipit & Sib Chiff having been on the scene, perhaps I was getting a tad over excited.....ahem, apologies to those I may have tweeted with false hope :(

We had a walk out towards the firing range and could see some Teal & Wigeon out on the pools created by yesterdays high tide. The marsh looked majestic and some glorious rainbows were making for good viewing.... 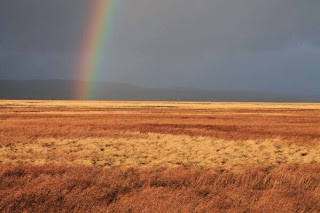 You would have thought you were out on the Serengeti, the view was that amazing.......

Pied Wags were on the tarmac path and a flock of Linnets flew over. No sign of Little or Short Eared Owls at the usual spots, but I would not blame them in today's conditions. On the way back to the cars, we spotted a Peregrine which flew low down and made a kill, then disappeared out onto the Marsh. The rain came down and despite having waterproof coats, we had some soggy jeans to contend with! Best get down to BMW and warm up by the fire :)

Not much out on the main scrape, but new year ticks were added for the more common birds, Blackwits, Tufty, Coots, Gadwall, Mute Swans, Shelduck, Little Egret, Mallard, Teal etc etc. After a quick trip to March Covert Hide which produced Shoveler & Pintail, we headed back to the car and off to Parkgate for the main event....High Tide.

The car park at the old baths was full so we parked in the Boathouse car park. The wind was whipping up and just as the tide was coming in it poured down again which hampered viewing. We spotted at least two ringtail Hen Harriers and I counted at least half a dozen Short Eared Owls hunting just out along the incoming tideline. Paul managed to take this pic, 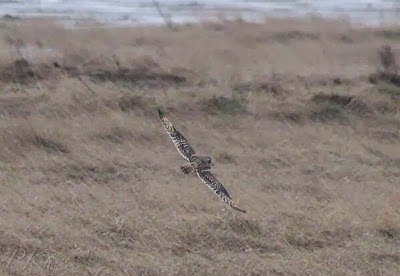 As the tide surged in, we saw some voles and shrews running for their lives, they were being watched by Gulls and this hungry female Kestrel who was a bit spoilt for choice but eventually captured and ate a field vole. 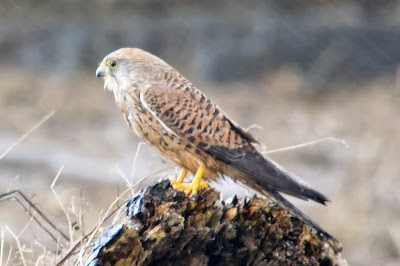 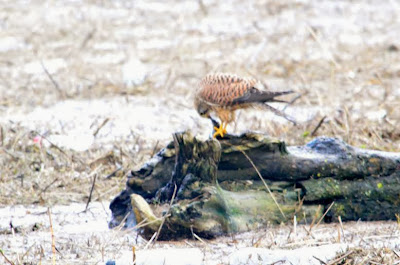 No fewer than 5 Water Rails appeared and one flew right at me landed by my feet, had a quick look around and then darted along the stone wall and into the bushes...bizarre. 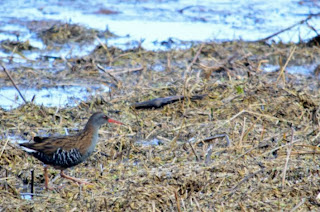 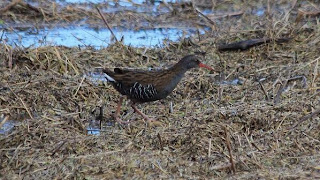 Unfortunately one of the Rails never made it and ended up being lunch for a hungry Crow :( 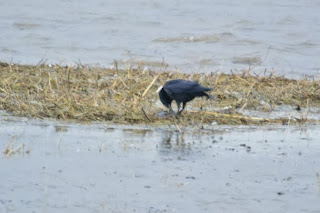 The water had come right up to the wall again and even breached the small wall by the picnic area, however it was a t least 0.5 metres lower than the December 5th tide which caused a lot of damage. This is a view of Parkgate. 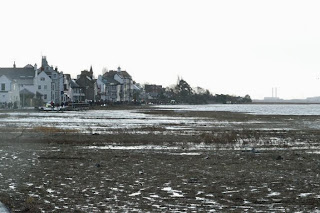 This was again an amazing spectacle and hundreds of Geese and Waders were all airborne and it was just birding heaven. We all needed some lunch so after spotting Austin http://t.co/LaWtjmhjJ9  and wishing him a Happy New Year, we headed off to the chippy (best on the wirral), we enjoyed the finest fish & chips ever!! As it was early afternoon, we headed off back to Burton to have a stroll down Denhall Lane. What a contrast to the marsh we left this morning, now covered by the sea!! 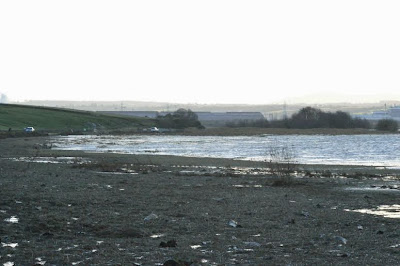 Unfortunately, the best laid plans o'mice an men gang aft agley. The skies went black and it started to bucket it down yet again!! So we decided to call it a day and head off home. Today brought my year total up to 70 already, so a good start to 2014 and hopefully with a few more areas to cover this year, will surpass my 214 of 2013. It's a marathon not a sprint hehe.