Firstly I would like to say a very Merry Christmas to all my friends and fellow bloggers. Spent a really nice day at my sisters having a cracking lunch with lots of beverages so when Shaun text me asking if I fancied a look down Burton on the Boxing Day, I thought it would be a great chance to see some great birds and clear the cobwebs!!

With all the talk of Buff Bellied Pipit and kicking myself for missing the chance to go with Dermot Smith and see it Sunday before our WeBS count, I arrived with a sense of optimism that the bird would still be about. Upon arrival, we had to park miles back from our usual spot by the gate at the bottom of station road as the world and his wife had descended upon our patch :( Walkers, Cyclists, Twitchers, Dogs, Kids, you name it they were all at the bottom of Station Rd!!

Never mind, encouraging signs of birders with scopes all trained on an area by the flag looked promising. Now for those that are not aware, on Thursday 5th December, we had a major storm surge and high tide, this was one of (if not the highest) I had ever seen and being a witness at Parkgate on that day to what I can only describe as a mini tsunami, was something I will never forget. The tide was that high that the water pushed all the debris from the marsh right up and over the tarmac path at Burton. Colin Wells and his staff did an excellent job of clearing the debris and clearing the track. What remains is an area of flattened marsh and reeds close to the road, that is a veritable haven for small birds who are feeding in amongst the detritus and boy are they having fun.

Amazingly the first birds we saw were Chiffchaffs, a couple of birds were feeding no less than a metre away from the road and were flying along the fenceline and in brambles, providing excellent views. The call was that they were the Siberian Chiffchaff as the buff face and breast sides and also a buff supercilium stand out. I suppose there is a great deal of overlap in these species (collybita, abientinus, tristis) so will put the pics on and let readers draw there own conclusions, certainly looked good for me :) 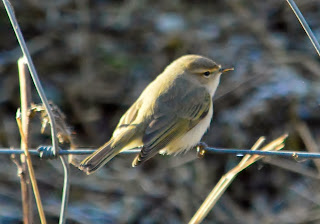 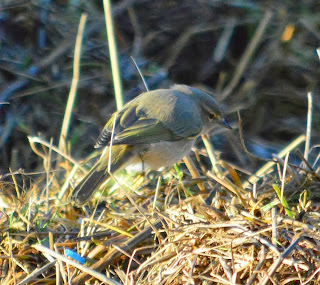 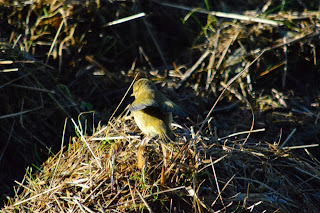 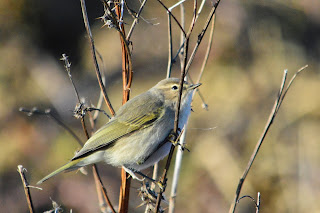 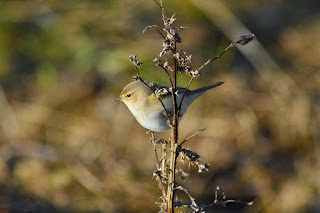 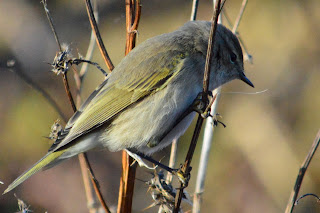 As you can see, from the above pictures Shaun took, very difficult to make definite ID with sunlight as well, but birders present agreed at least one of the birds was a tristis.

Well, it was a great place to watch and as well as the numerous Meadow Pipits and the lovely Stonechats that kept appearing, in the field opposite we had Redwing and Fieldfares. Now then to find the Buff Bellied Pipit was not easy, nobody present had located it and it was now 11.30am. Viewing these birds in amongst this excellent camouflaging debris was quite difficult and the pipits as always were on the move constantly feeding and disappearing now and then behind various rafts of reed and rubbish. I went further up by the gate and trained my bins on a huge pile of vegetation that had caught my attention because a solitary pipit was sitting on top whilst everyone was looking the other way, hmmm. Bingo... Buff Bellied Pipit, oh, just as I was about to announce, the bugger flew off, grrrrrrrrrr. Trying to relocate was a nightmare and after about half an hour, we decided to walk up the track towards Burton Point as it was now becoming rather congested (bloody packed)!

Walking along this track is normally peaceful, however today it was like the M1, "can you not hear the bell deafhead" muttered an angry cyclist as he manouvered around the throngs of xmas walkers, this was an ongoing problem and after initial amusement, became rather boring. I was enjoying, Rooks, Wigeon, Egrets and a lovely Merlin that flew like a bullet along the fenceline out on the marsh :) Shaun spotted some Stonechats that were following us along the nearby Burton Marsh Farm fencing, flying into the field then back up onto the wire fence flicking their tails very gracefully. 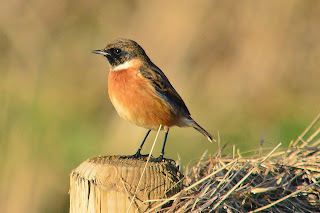 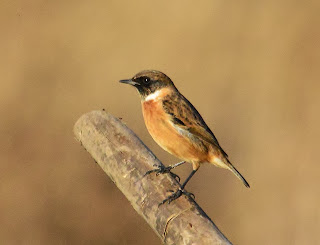 Lovely birds and always pleasing to see them here at Burton. A bit further along we spotted a group of Pied Wagtails all feeding quite happily and oblivious to the folks passing by :) 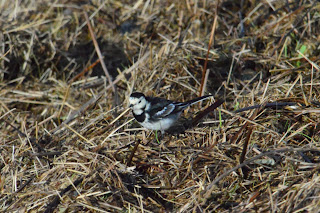 Linnets and Goldfinches were in gorse just up past the cattle grid and the harsh clicks of an annoyed Robin allowed us to focus in on his majestic red breast. Wandering off the track and towards the rifle range (thankfully closed today) Shaun waved me over. "What you got mate?" ......"Shortys back" he said, I looked over and there was our old mate, the Short Eared Owl, brilliant!! I got my new phoneskoping attachment and placed it on the scope and took these shots. As you can see a Magpie flew on the post alongside the Owl, rather bravely and boldly, typical of the species! 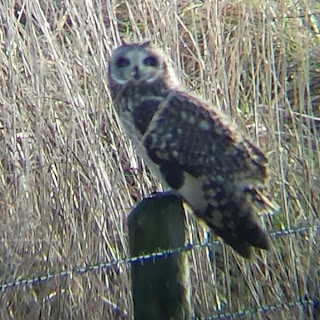 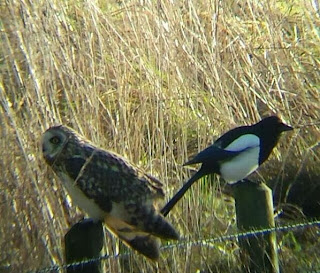 Superb!!! After enjoying this magnificent bird for a while, we walked along the track by the rifle range to see if we could spot some ducks on the pool further out on the marsh. Along the way we spotted a Merlin sitting on a fencepost and a Great White Egret was further out still. A pair of Buzzards watched from nearby trees as we flushed Lapwing, Redshank, Golden Plover who all flew off calling loudly. As we arrived at the pool, no ducks!! Just one Coot who had the gaff to himself and swam around like cock of the rock!! Nevermind, it had been an icy morning and part of the pool was still frozen over, so probably explains this lack of birds.

On the way back Shaun spotted a Peregrine and it flew from a gatepost right across in front of us and out onto a perch on the marsh. Time was ticking on so we headed back in the hope the BBP had been relocated. We were in luck as Ken & Tony, fellow birding buddies had seen it to the right of the gate where we had seen the Chiffchaff. After some searching and going a bit bog eyed trying to see the distinguishing dark median coverts, (almost like a japonicus) but defo a rubescens, success, the bird appeared and happily showed for a good ten minutes or so before we had to make tracks for lunch and I was going out for the footy. A great couple of hours birding down on the patch and not very often you get to see a V*** well happy. Here is a library pic of a cracking pic taken by the Hilbre Bird Obs team 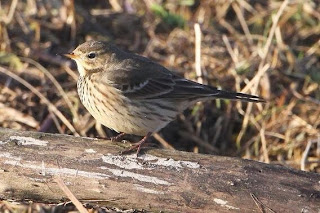 Big thanks to all my readers and a special thanks to my good friend Shaun who provides the transport and takes some cracking photos and Paul from Liverpool :) It's been a good year and I'm now on 214 for the year so not bad considering most of the birds have been seen in the North West!! A mention to Alan Davies and Ruth Miller whose excellent book The Biggest Twitch gave me writing inspiration and to other bloggers who also provided inspiration for me to get started as I still read their blogs regularly, Findlay Wilde, Matt Thomas, Keith (@holdingmoments), Ellis Lucas, Phil Woolen, Austin Morley, Warren (@liverbirder) to name just a few.

All the best for the New Year