Took a trip over the border into Wales with Shaun to see what the other side of the Dee Estuary had to offer. The Deeside Naturalists were holding an open day on the mile long reserve that runs along the River Dee and the Dee Estuary by Connah's Quay power station. Met up with our scouse mate Paul and after being scrutinised on entry by CCTV and having our number plates logged (the site is managed and owned by e.on) we parked up at the field studies centre and popped in for a chat. Dr Paul Brewster manager of Focalpoint Optics was inside and after a brief chat, we walked down the paths and into the first hide.

Quite a few waders were roosting and incuded Redshank, Spotted Reds, Black tailed Godwits and a few Greenshank. As we were looking the shrill call of a Kingfisher alerted us and gave a quick fly by in front of the hide before disappearing out of view. 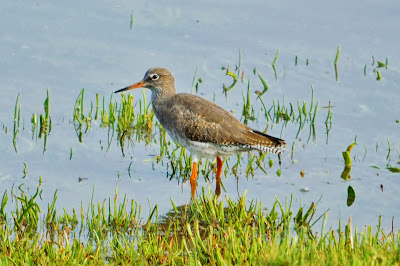 The odd Grey Heron and Little Egret was also present along with a few Teal and Mallard. We moved further down the road and into another hide but it was fairly quiet out on the pools in front with just a few Black Headed Gulls and a few Redshank resting up. Walking along the road that runs between the power station and the estuary, planted either side are various shrubs, trees and bushes, which give good cover to protect the birds from view. Further down the road it opened up a bit and we could see hundreds of Goldfinches forming flocks and feeding on the weed seeds on the banks of the Dee. 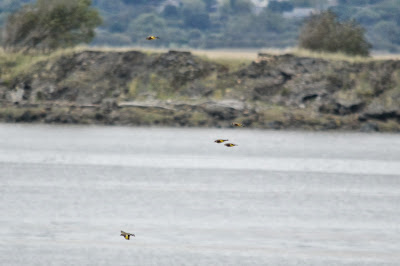 Overhead, Skylarks and the odd Meadow Pipit could be heard passing by. A bit further up we spotted a female Reed Bunting (we think) in a tree nearby. 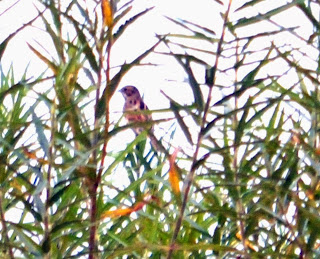 The tide had not long come in and quite a few Redshank mainly were making their way up the River to their Roosting areas. The main West Hide which is two storeys was quite busy so we waited outside but had good views of Shoveler, Tufted Duck and a pair of Buzzards overhead that was joined by a Sparrowhawk circling higher above them.

When we got into the hide we could see Flint Castle and in the foreground on the banks of the Dee were mainly Oystercatcher, Curlew, Redshank, Godwits and the odd Shelduck. 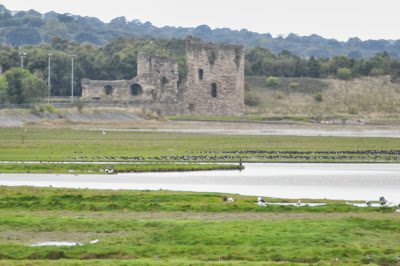 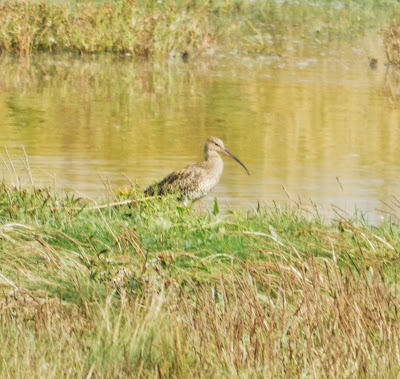 On the river were quite a few gulls, including a large number of Great Black Backs and mainly Black Headed and Herring Gulls. Looking out over the river gave views of Parkgate. 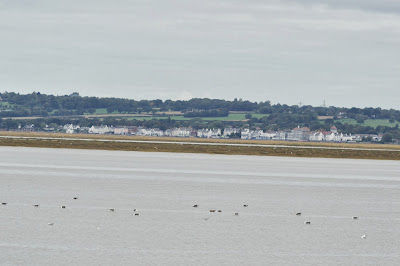 After chatting with a few familiar faces and watching a Peregrine perched out on a Pylon, we made our way back to the field centre, on the way, we watched four Ravens in an aerial duel, the wedge shaped tales very noticeable. When we got back to the van, we had a bite to eat before setting off to Burton for a few hours. It was worth coming to have a look and I can imagine it being a good place to see birds especially in the winter months when the geese and wader numbers increase. Here is a link to the webiste :-

Parking up at Station Rd we had a walk along the tarmac path as far as the shooting range at Sealand. Again, large flocks of Goldfinches (mainly juvs) were nearby a manure pile at Burton Marsh Farm along with the odd Linnet and Pied Wagtail. 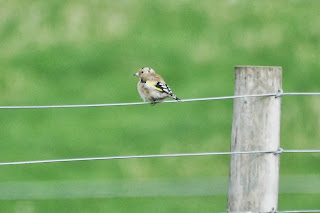 Dodging the cyclists and Dog Walkers (only one had a dog not on a lead), we scanned for the Little Owls with no success. Walking back we received some abuse from a fat cyclist who had somehow managed to tuck his lard ass into lycra shorts "Oh look, it's the greater spotted tit heads" he said, how funny, there's a first time for everything I suppose. 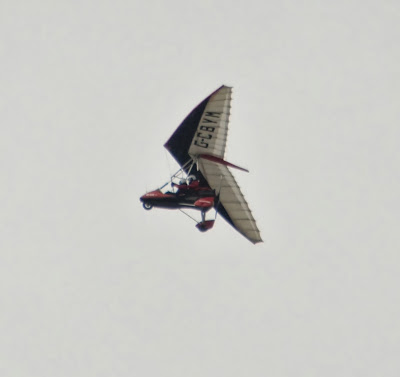 We then spotted a small bird on top of the reeds, it was flying up into the air from the reed almost flycatcher like and was catching insects and then flying back down. We had not brought the scopes so had to make do with the bins, but first impressions were fem Stonechat. We had seen these birds here throughout the year and it was the most likely candidate, especially when it flew off and the white wing patch was evident. Here are some pics. 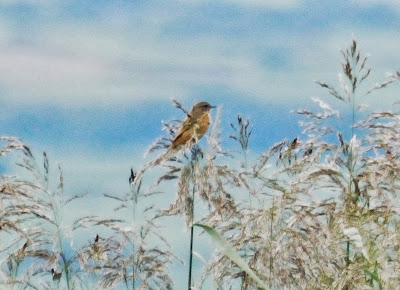 Apart from a Buzzard and a female Kestrel we had seen over the marsh, no sign of any Harriers. We headed off to Inner Marsh Farm. Upon arrival it was quite busy and straight away we saw some lovely Golden Plover in amongst the Lapwings. 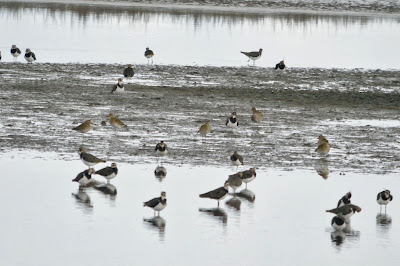 A solitary Greenshank was nearby and we had some good views of Snipe feeding in the reeds. 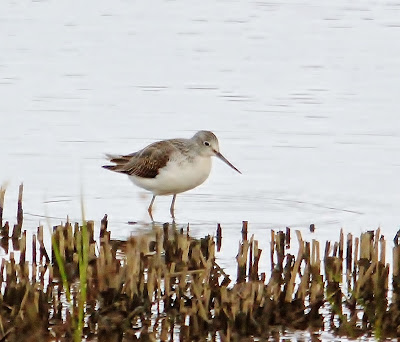 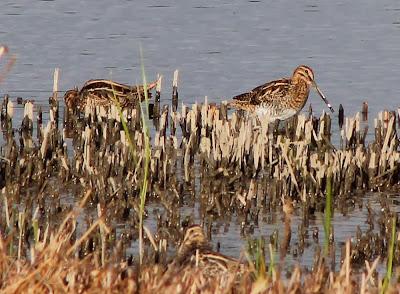 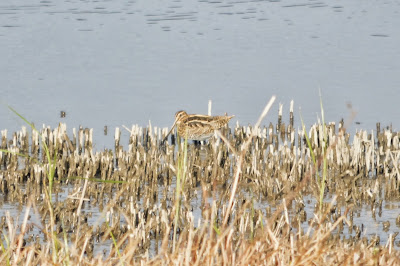 Other birds out on the scrape, included Curlew Sandpipers, Black tailed Godwits, Greylag and Canada Geese, Teal and a few Wigeon. Over on the other far pool I could make out one or two returned Pintail :) 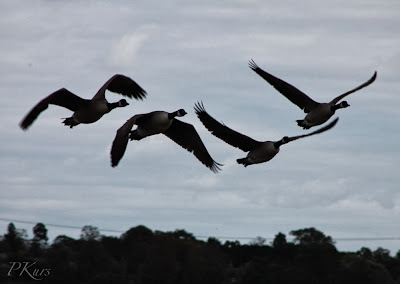 It was getting late, but before we left we had an unexpected flyover by a Great White Egret. You could see his long neck tucked tight in and his trailing legs which stick out way past his tail. 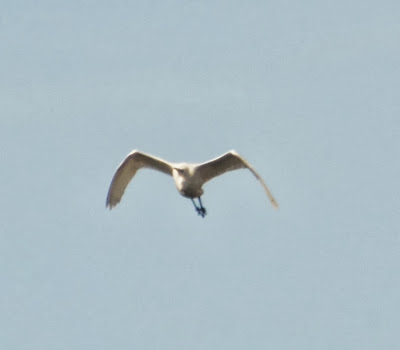 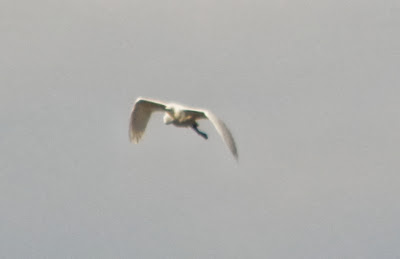 A nice end to the night and another enjoyable day out with good company. Oh and in the car park by the RSPB buildings, I heard a Chiffchaff calling and also the manic laugh of a Green Woodpecker :)