Had booked a trip with the RSPB and Wirral Coastal Rangers so myself and Shaun met up with the rest of the group at the marina lake in West Kirby around 9.15am. Weather was fine but breezy with the chance of hit and miss showers, had a quick scan for a Med Gull around the lake, but could not see any. Colin Wells (reserve manager Burton Mere Wetlands), Dan and Hannah were heading the RSPB team and Lynne was helping the guided walk on behalf of the Wirral Rangers.

Hilbre Islands is a haven for wildlife, especially birds and consists of three islands, little eye, middle eye and the main larger island Hilbre. Low tide was around an hour earlier so, we made the walk out to little eye, dodging the bigger pools of water as we went along. As we got to middle eye, 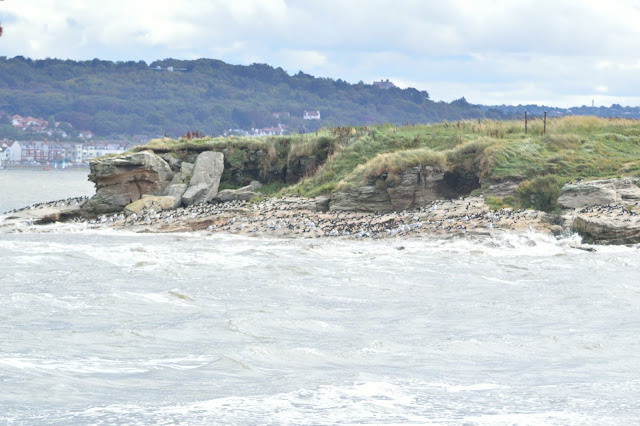 we stopped to scan the sandbanks for waders, we could see, Ringed Plover, Oystercatchers (in huge numbers), 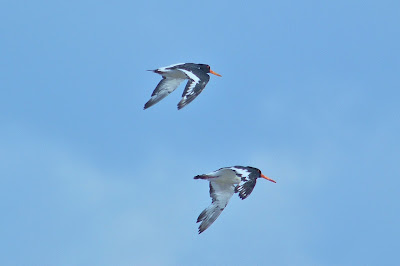 some Bar tailed Godwits and I spotted a solitary Grey Plover still in resplendent summer plumage. Moving along we reached the main island which is roughly a 2 mile trip from the mainland. The guiders explained we would be doing some seawatching and also keeping an eye out for any passerines (small birds) that may be on the island. Some Meadow Pipits and a Dunnock were noted near the observatory garden. The guys in the observatory do a lot of bird ringing on the island and Colin showed us the heligoland traps (so named after an island off the coast of Germany where the first trap was built, hence the name) in which they catch the small birds. They are then measured, weighed, sexed and ringed and recorded in log books then released.

We made our way down to the old lifeboat station for a bit of seawatching. The tide was high now and we were  completely cut off from the mainland. Most of the birds that flew past were Cormorants. 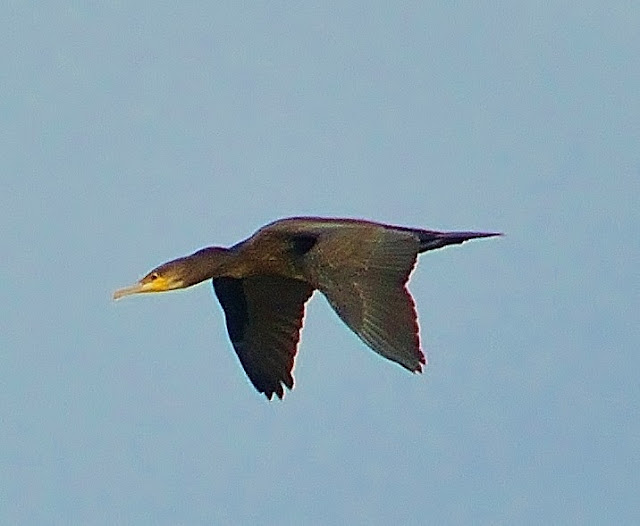 Quite a few Sandwich Terns were noisily passing overhead and we also spotted a Great Crested Grebe out to sea. Just then Colin spotted a Common Scoter which was flying very low and fast quite a ways out! A couple of guys in our group spotted a young Guillemot but the views were not too good as the waves were disrupting the views as the sea was very choppy. Sadly no Skuas, Petrels or Shearwaters were to be seen today. The weather forecast had changed in the run up to the trip and the gusting North Westerly we were hoping for never materialised.

Myself and Shaun decided on a look around the island to see if we could spot any small birds. We flushed a small party of Linnets and then later spotted them bathing in a freshwater pool :) 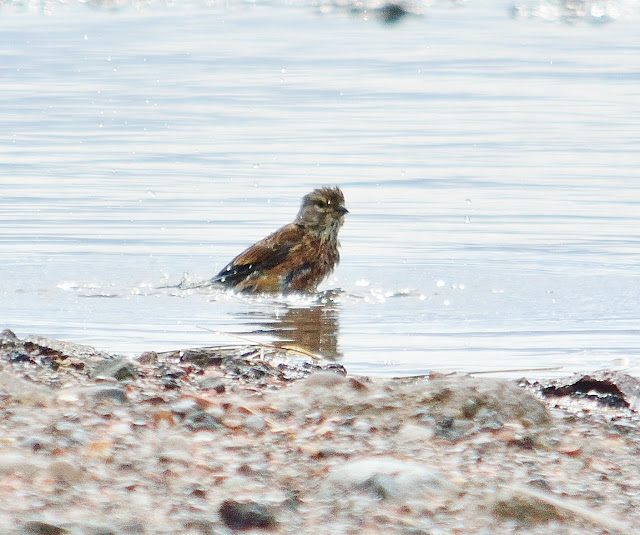 A couple of Swallows were flying around and Shaun then spotted a female Wheatear up on a grassy bank. This time of year is known as return passage and quite a few of these fantastic birds had been spotted locally over the last few days. 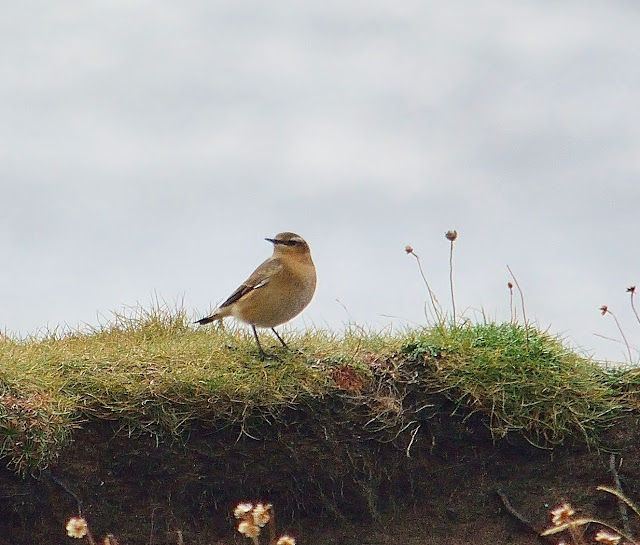 The hweet call brought my attention to a Chiffchaff that was calling just outside the obs garden, but was proving elusive and was deep in foliage away from the breeze. Just then a female Kestrel flew up and I watched her hunting for a while. It was thrilling to see her hanging in the breeze and then dropping down in stages to finally catch her prey, a small mouse in this instance :)

We headed back for refreshments and had a brew in one of the old buildings that accommodate visitors to the island. I was intrigued by the old bird books and was looking through one at declining species and causes, habitat loss and more worryingly climatic change was highlighted and this book was going back into the early 80's!! Great to see the effort put in by the RSPB and volunteers to try and reverse this trend by providing great habitats for wildlife and birds.

After lunch, we walked around the East side of the Island as the tide was back on it's way out, here we got some great views of a Ringed Plover family. You can see the juvenile bird in the middle as it has an incomplete breast band. 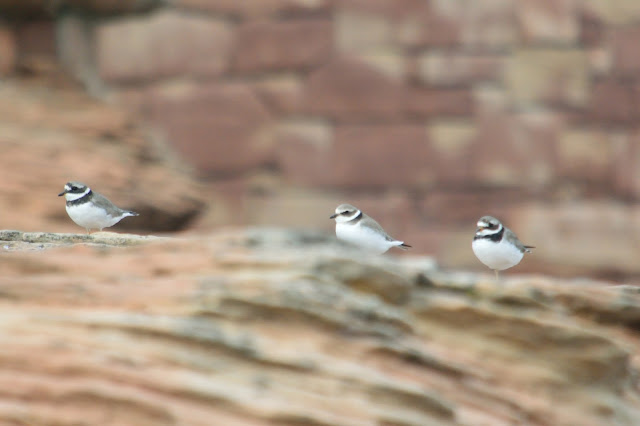 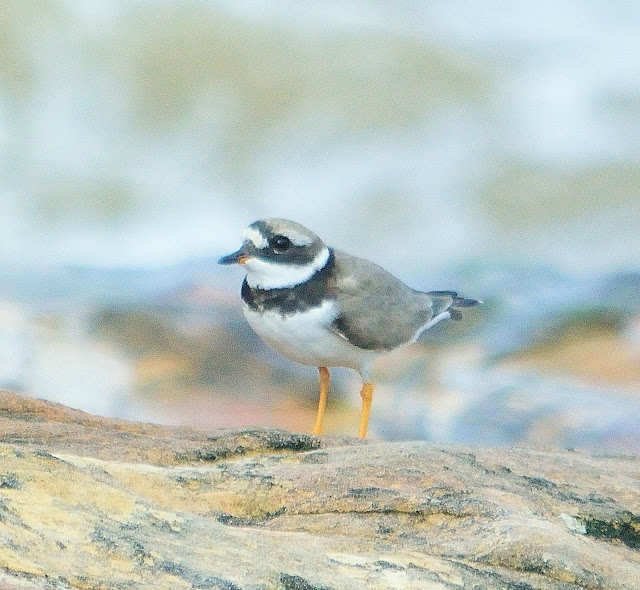 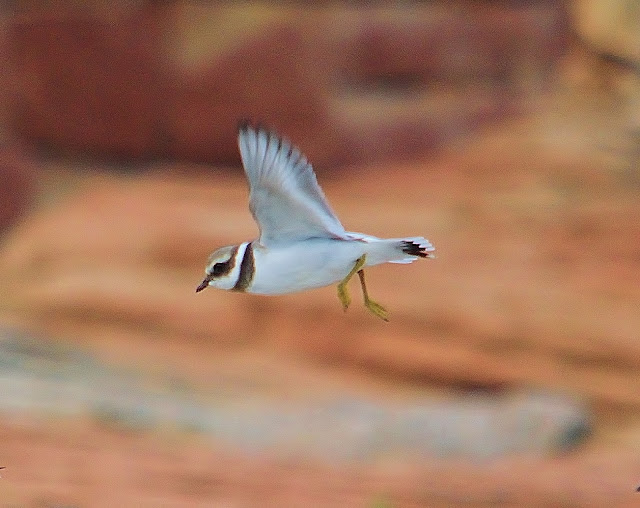 Quite a lot of birds were now on the move and a Whimbrel flew past and we then spotted a family of Turnstones who were not the slightest bit bothered about us interrupting their get together. 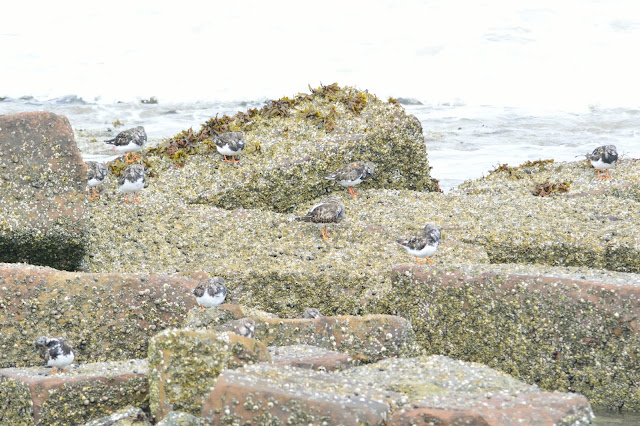 Hilbre is also known for other wildlife and the @hilbrebirdobs team do a great job of managing the wildlife gardens on the island which attract a number of butterflies and dragonflies during the summer months. We were being watched by a number of Atlantic Grey Seals and they are quite curious about visitors to the island and will pop up and take a peek :) 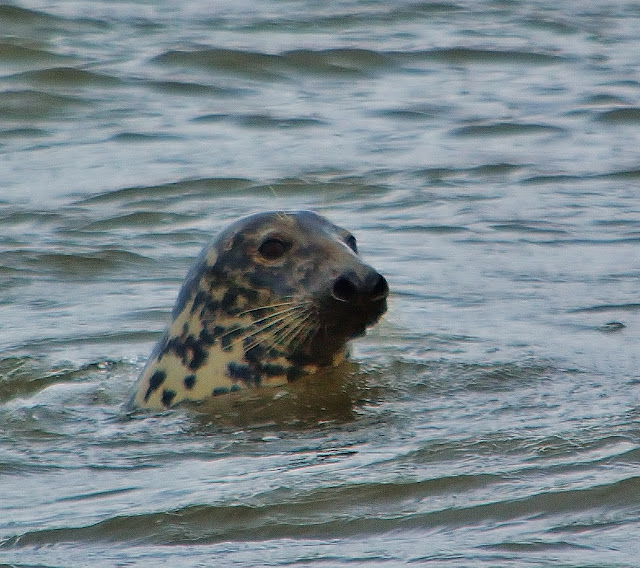 The sky was darkening in the distance and it looked like we may be in for a sharp shower. I joked about the pot of gold at the end of the rainbow and was wondering if a rare bird was in the nursing home gardens over at Red Rocks!! 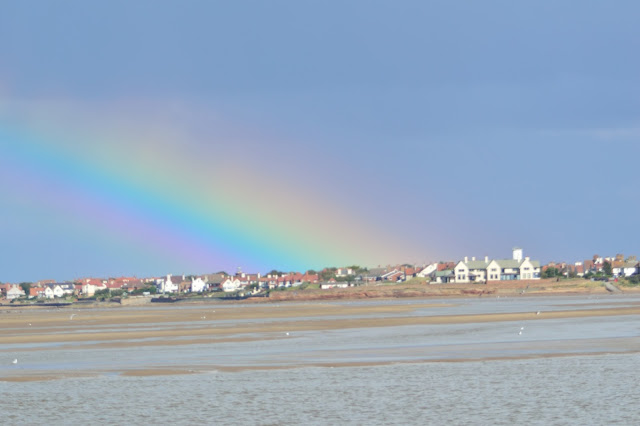 Time was ticking on and the tide was receding faster than my hairline (ahem) so we made our way back across the wet sands and back to the car park. On the way, Shaun spotted a Little Egret feeding and took this picture. 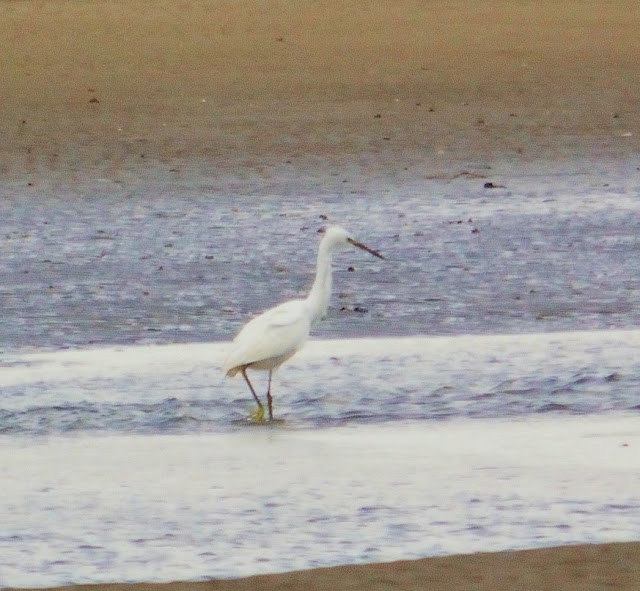 All in all it was a good day out and despite getting soaked on the way back to the van as the heavens opened, I would recommend to anyone who has not been, to go over to Hilbre and enjoy the fresh air and great wildlife. Here is a link to the Hilbre Bird Observatory and also the Dee Estuary Site for those planning a guided trip in the future. Once again many thanks to Colin, Dan, Hannah & Lynne.