Having missed last weekends migfest at Spurn due to being over at Hilbre Island, myself, Shaun and Paul (our friend from over the water in Lpool) planned a trip for the following Saturday, we were jealous we missed all the fun of the festival but on a brighter note were optimistic it would be quieter and may still see some great birds. We were not to be disappointed.

Shaun picked me up at 4.30am and we met up with Paul in Frodsham and shifted all our gear over to Pauls car for the trip East. The roads were clear and in just under 3 hours we were pulling into the car park at the back of the Blue Bell Inn cafe. The North Sea was very choppy and it was a cold wind, so it was defo wooly hat time.

We set off down the famous long road/spit that we had heard so much about and were all very excited about what we may see. All around us we could hear Meadow Pipits and the majority we could see were coming in off the sea. The fields were alive with Goldfinches, Swallows and Pipits. 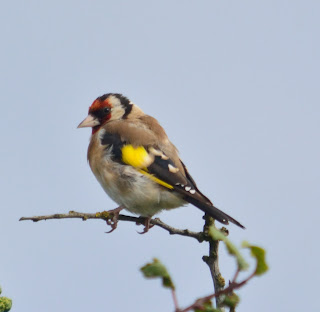 We stopped in at the canal scrape and a sign on the door to the hide warned to keep right as there was still nesting Swallows inside to the left!! We spotted some Moorhen and a Snipe was feeding opposite. 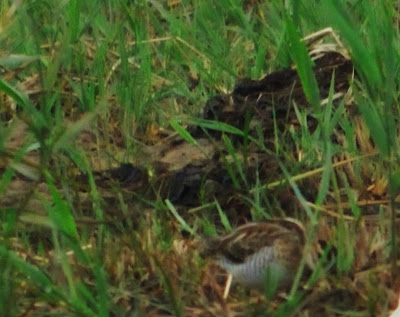 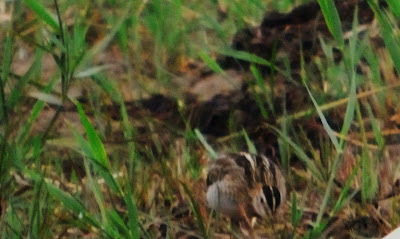 Just then we heard a Redstart and spotted a female in the bushes quite a far way out to our right hand side, we were watching this bird when a Sparrowhawk flew across the scrape and flushed the Snipe. Presumably one of the local pair that also flushed a Pec Sand yesterday grrrrr.

It had began to warm up slightly and after a cuppa and a sarnie in the hide, we headed back towards Southfield Farm to see if we could spot the Red Backed Shrike. Our luck was in, the Shrike was showing well on a fence post in a small paddock like area with orchards at the back of the farm :) 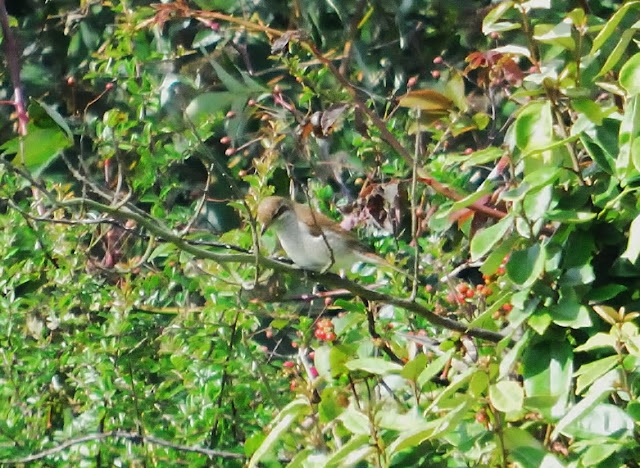 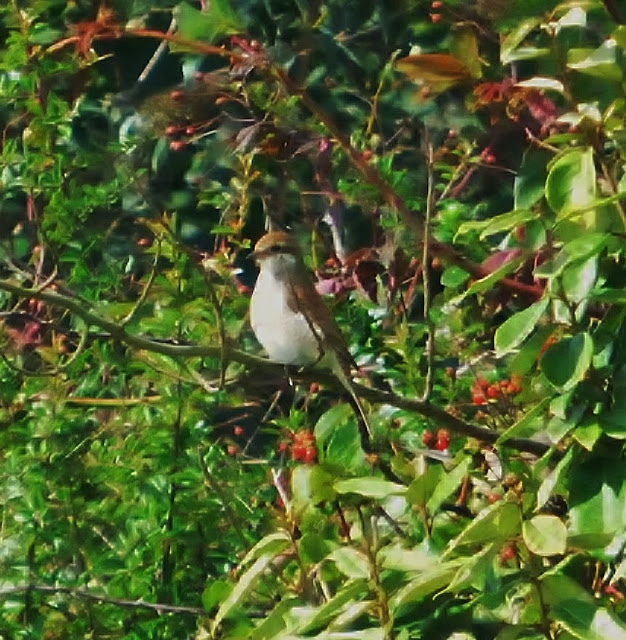 Brilliant, this was a new year tick and we had great views as seen above.

We decided to head off towards the bird observatory and do a spot of sea watching. As we arrived the hide was full, so we spent around half an hour outside looking out to sea, most of these pelagic birds were quite a ways out and were quite tricky to ID despite having our scopes. With seabirds, shape, wingbeat and behaviour is key in helping to ID. We had some Manx Shearwaters and Gannets pass by and just then two Wheatears flew in off the sea !!

The hide emptied out a bit and a flap opened up and a guy shouted us in as there was now room. His name was Steve from the Obs and he was doing a count, we sat alongside him and it was entertaining to spot these seabirds in tandem. Slowly but surely the counts built up, "Sooty Shearwater, flying low over the waves going North" came the cry, Bonxie, (Gt Skua), Arctic Skua with quick wingbeats and sudden lunges down towards the sea. Sandwich Terns, Red Throated Divers, Fulmars, it was seawatch heaven. Then it would go quiet and all of a sudden after 15 minutes the clicker went mad again as Steve began counting the stream of Gannets that suddenly appeared. We enjoyed a good chat and it's great to meet new people who share a same passion. Shaun (who me and Paul have christened The Lurker) had vanished again and seldom sits in a place for more than 15 mins and likes to be on the move and we often find him lurking up a dark path or near some bushes (hence the new nickname), really he is out and about with camera looking for good photo opportunitys :)

Steve had told us we would not get a fry up at the Blue Bell Cafe, but put us onto a good spot in the caravan park, where there is a greasy spoon cafe. Thanking Steve for his hospitality, we set off for some grub. On the way to the cafe we spotted a very yellow looking warbler and relocated it in some bushes. Sadly it was nothing special but nevertheless a lovely and very bright Willow Warbler, if only they were all this colour, seperating chiff would be made so much easier. See below 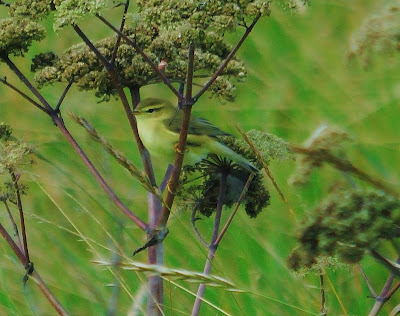 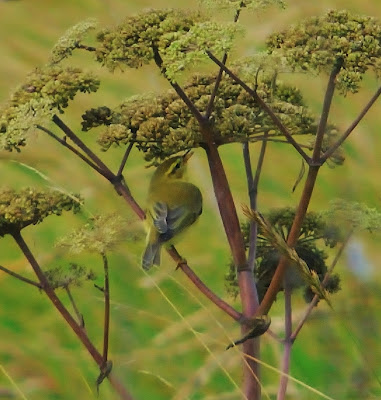 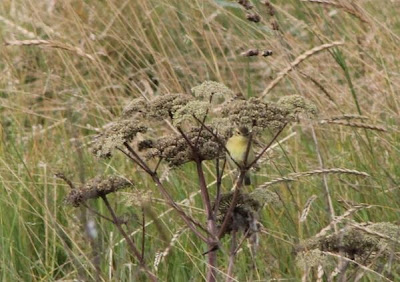 On the way to the cafe we spotted 2 juv Med Gulls out on the Sea. 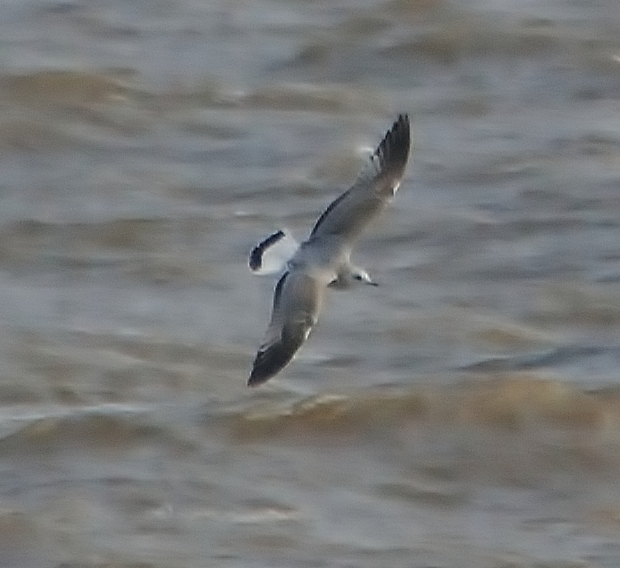 Now, the cafe also doubled as an amusement arcade and had to endure "oo oo oo, I wanna be like you oo oo" tune from the jungle book repeating around every couple of minutes through our breakfasts. Nice as the brekky was, we were glad to get out!!

"Where next?" I said, should we drive or have another walk up the road and scan the bushes to see what may have dropped in? Walk, how fateful that decision proved to be. Walking past Southfield Farm, both myself and Paul spotted a bird fly into some bushes. The Red Backed Shrike was perched on some branches nearby, but another bird was making it's way through the branches towards the Shrike? BOOM Barred Warbler a 1st Autumn imm bird. 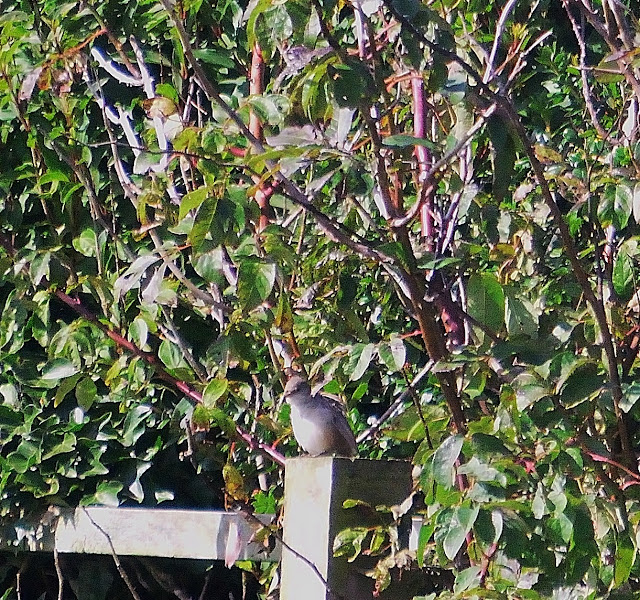 I had imagined spotting one of these birds and now it was here I was mesmerised as it showed really well and perched on a post and preened and even sunned itself for a while. Fresh in and another year tick :) The 3G signal here in Spurn is sporadic nevertheless and I quickly tweeted RBA with the news. Ian Smith, chairman of Spurn Bird Obs who was nearby also relayed the news on his two-way and soon a scurry of birders descended on Southfield Farm!! Now if you look in the Collins Field Guide, under Barred Warbler it says (shares habitat with Red Backed Shrike), your not kidding!! Take a look at this pic :-

This place was quickly growing on me and my mind was racing, what's next I wonder? We enjoyed the bird for a while, then walked up the road towards the Obs and the Estuary as high tide was approaching and we needed to clock some waders.

Arriving at the Estuary the tide was nearly all the way in but had great views of Red Knot (in thousands), 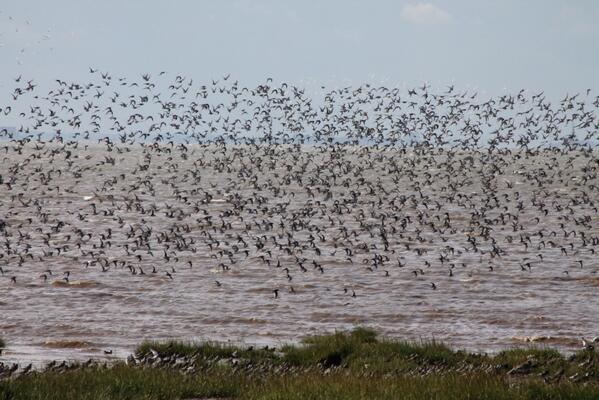 Dunlin, Ringed Plover, Curlew Sandpiper, Redshank, Spotted Redshank, Greenshank, Grey Plover, Golden Plover, Barwits, Curlew, Sanderling, Turnstones, Shelduck & Little Egret, it's hard to do it justice in words, but it was simply breathtaking. Also we saw a Sparrowhawk and a Peregrine hunting. Here are a few pictures that Shaun took. 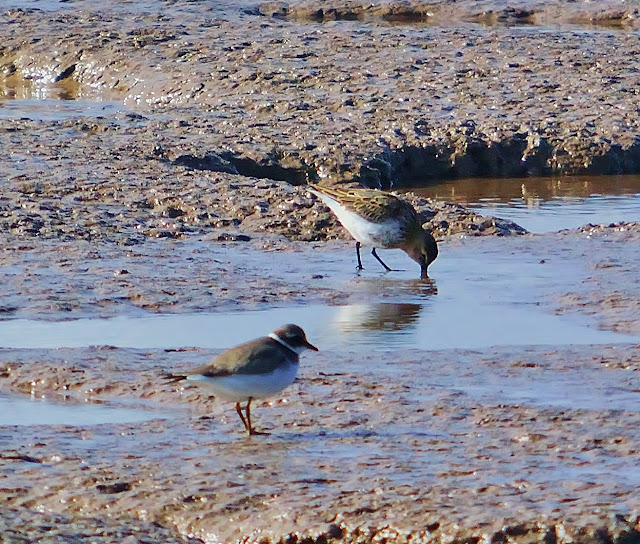 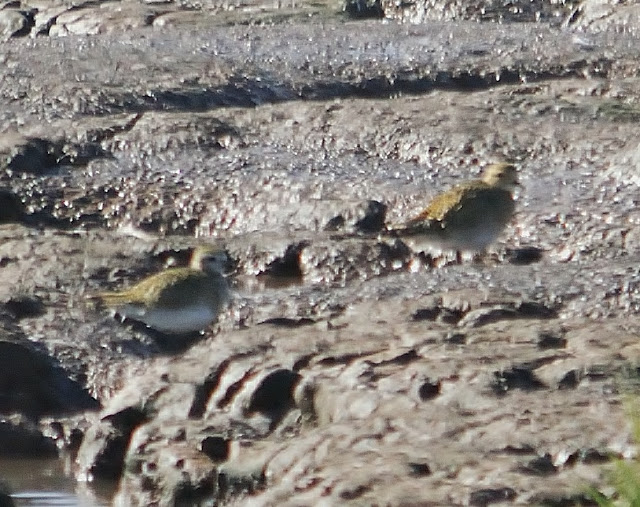 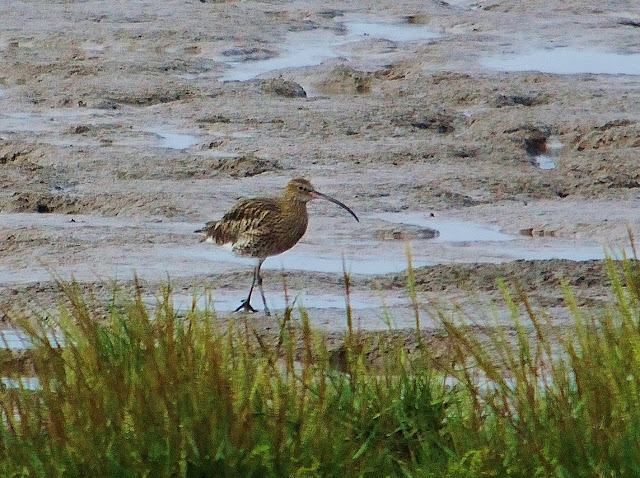 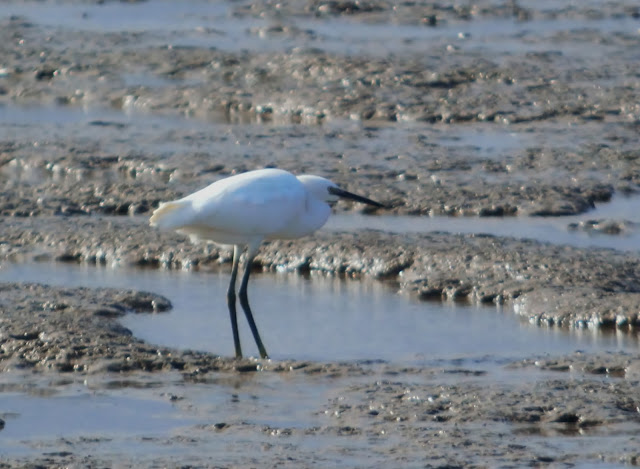 Pic of me and Paul enjoying the spectacle :) 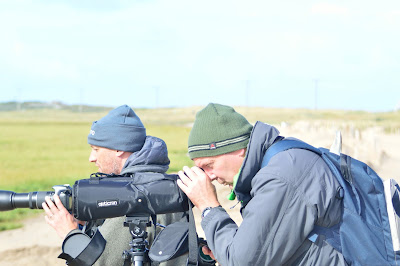 After enjoying the waders, we walked further up past the obs and out further onto the spit, on the way though we spotted some young Swallows being fed by their parents in and around the Yorkshire Wildlife Trust reception. 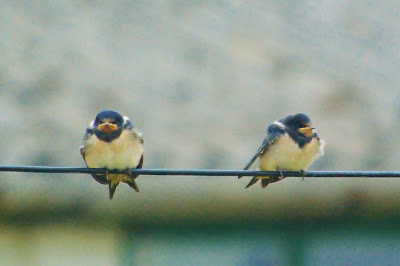 Walking along the road towards the lighthouse was a bit tiring and we had to constantly step into the dunes to make way for a procession of cars that kept coming through. It had it's benefits though as Shaun spotted this fine Wheatear on the beach and got this cracking photo. 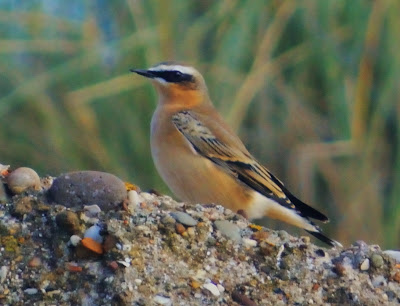 We clambered up an embankment and near to a wooden shelter type structure and looked out to sea. Not a lot was happening, Pipits were still coming inland though and then a Leach's Storm Petrel appeared and glided past in the powerful winds. First one of the year for me and another tick :)

Time was ticking on so we decided to have a walk back and take the coastal path to search the bushes for migrants. Some Buntings were in the bushes and with news a Lapland Bunting may be about, we were looking high and low, Shaun managed these photo's of Reed Bunting :} 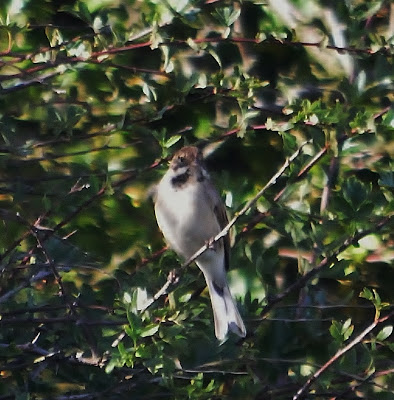 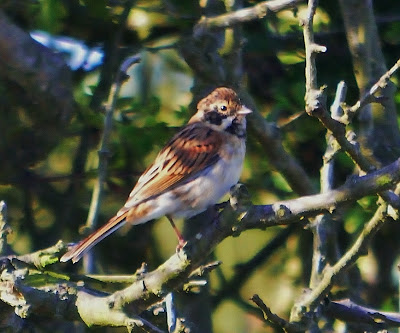 So many different variations and females often get a male like head pattern, arghhhh.

Not many butterflies or Dragonflies along this path but spotted a Migrant Hawker and a Speckled Wood so not a bad pair to find :) 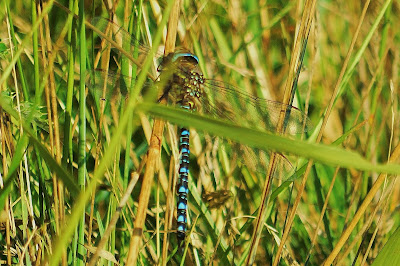 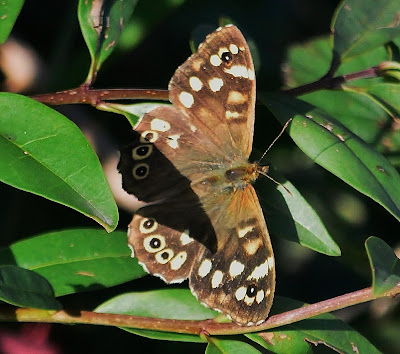 Paul was suffering with his back so left me and Shaun to walk the path that separates the estuary and Southfield Farm, it leads to the Crown and Anchor Pub :) so we stopped in for a couple of pints! Heading back to the car park where we had agreed to meet up with Paul we saw a chap photographing a dragonfly by the side of the road. Just then a car pulled up and a bloke shouted out to him "Great Snipe at Warrenby Cottage" Vroooooooom, it was off like a shot and so were we, well I was, Shaun don't do running haha.

Upon arrival, there were around 20 birders all looking into a drainage ditch that ran between the cottage and the nearby fields. "Snipes in there" a guy said, in a thick Yorkshire accent :) To say it was well camouflaged would be an understatement!! All the activity had moved the bird deeper into cover and after around 15 minutes when a few more of the senior birders at Spurn had arrived, it was decided a guy would enter the ditch and try to flush it, ethical or not I thought oh well at least I will get to see it. 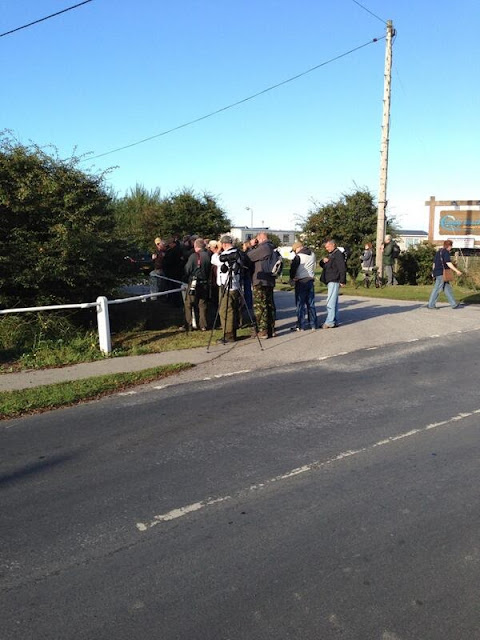 Butterfly net in hand? This guy clambered into the ditch and the Great Snipe thought I'm not having this and casually walked out into the field on the other side! Mass exodus around into the field, the Snipe was in the grass on the edge of the hedgerow and albeit restricted view, nevertheless I bagged a view of my first ever Great Snipe, a lifer BOOM :) After about ten minutes of viewing, it moved back into the ditch. I spent a while face down on my belly trying to focus in at close range and relocate, however I decided time was ticking on and we had to make the three hour journey back home and grab a meal on the way back so we called it a day. 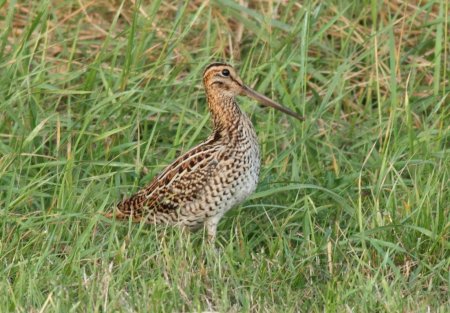 What a great day's birding and with great company, thanks to Shaun & Paul for making it an entertaining day and taking great pics. Also a big thanks to the friendly people of Kilnsea and Spurn, we will defo be going back again!!