At around 9.15am myself and Shaun arrived at Burton Mere Wetlands and were set to meet a couple of our 'twitter' friends Keith @holdingmoments and Heather @kidsnorthwest

Keith was already on the boardwalk looking out over the scrape and had spied a nice Snipe in the grasses. We said our hellos and continued to scan the scrape and spotted the usual suspects, Black Tailed Godwits, Mallard, Teal, Gadwall, Canada and Greylag Geese in good numbers, but a distinct lack of waders and not one Lapwing was present.

The birds were flushed momentarily as a Buzzard flew across the scrape and landed on a fencepost out towards the right of the reception hide. On closer inspection there was a further 2 Buzzards a bit further up also on fenceposts. Entering the reception hide, we then met Heather who had been given a mornings pass out after a couple of days looking after a poorly @wildeaboutbirds (her son Findlay), after greetings, we spotted a Little Grebe and a couple of Wigeon, but nothing to really catch the eye.

We decided on a walk around the lake and up towards Marsh Covert Hide, it was a warm day and a couple of Brown & Migrant Hawkers were flying around the paths. Seems a good year for Goldfinches and quite a few were in and around the bushes by the feeders.

Upon entering the hide, we had little to see other than a few Geese further out and a constant stream of Canada Geese flying in to the wetlands from the direction of the Dee Estuary. 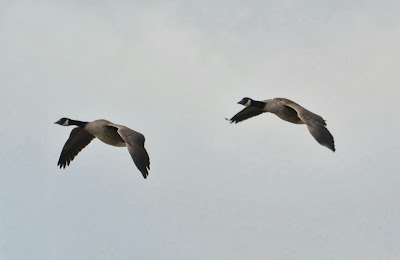 Keith whilst enjoying birds and nature in general, is very much into Butterflies/Dragonflies, so he spotted this nice Comma sunning itself just outside one of the hide windows and took this lovely photo. 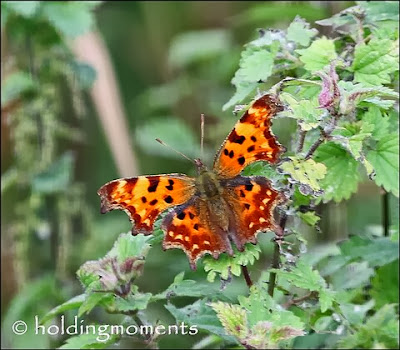 Shaun had promised up some home made vegetable soup so had disappeared to the car park to open his mobile soup kitchen (aka works van) when we got there it smelt absolutely gorgeous and tasted very nice too :) Sadly, Heather had to head back home so we promised to all meet up again sometime maybe at Froddy Marshes.

Myself, Shaun and Keith were heading to Hoylake shore as a 9.5m tide was due around 1pm. Upon arrival, many birders were lined up along the promenade and we could see quite a lot of waders and gulls moving in with the tide. 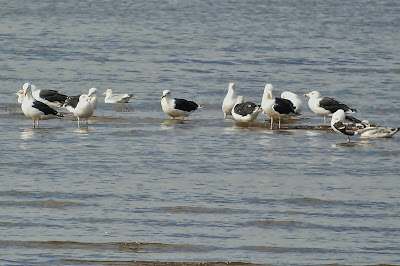 Great Black Backed, Lesser Black Backed, Herring and Common were the main species, but a local birder spotted a juv Caspian Gull in amongst the flock. 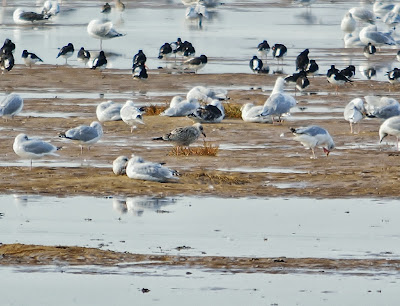 Keith had never been to Hoylake before and was enjoying the spectacle as the waders flew closer to shore as the tide came in. Just then a Peregrine flew into a flock of Dunlin and quickly snatched one unlucky bird up and then made it's way off out towards Hilbre with the spoils. Quite a few Oystercatchers were out on a small spit of sand still uncovered by the encroaching tide, in amongst them were 30+ Bar tailed Godwits and around a dozen Knot. 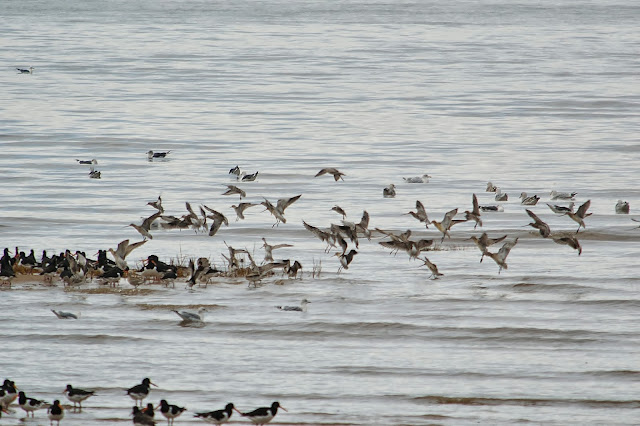 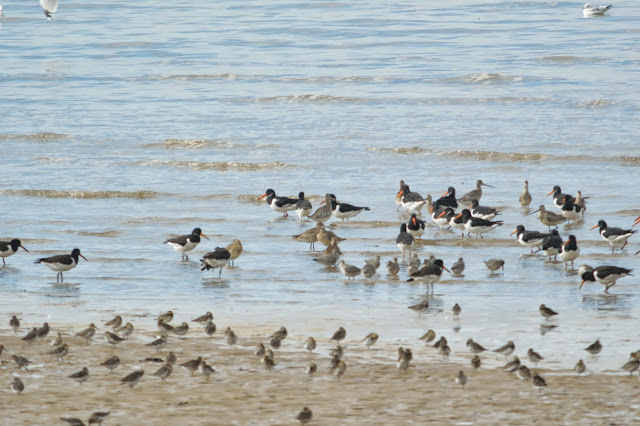 Small waders such as Dunlin, Sanderling, Ringed Plover and the odd Curlew Sandpiper were scurrying around in a feeding frenzy, sadly as it was the weekend you got the odd irresponsible dog walker, who despite seeing huge numbers of birds and birdwatchers, still let their dogs run amok on the beach!!

I spotted a Curlew Sandpiper in amongst the flock of Dunlin and Shaun managed this shot, you can see the bigger bird facing the camera with a lot more white underneath. 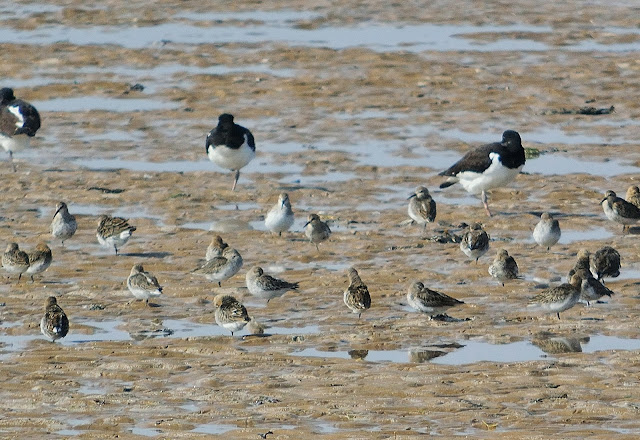 Birds were coming and going and huge numbers of Oystercatchers and Barwits were making their way across the sands to eventual roosting spots probably on Middle Eye over by Hilbre.

Just then I overheard Colin Wells (local RSPB) taking a call about a sighting of a Semipalmated Sandpiper (a small American wader) the bird had been spotted by Jane Turner (local expert) who had been doing some wader counts from a higher position. Sure enough we got a fleeting glimpse of the bird as it ran quickly inbetween the Dunlin and Ringed Plovers in a flock of around 100 birds. Just as the scope got settled, a dog ran into the flock and the birds moved further down the beach and we lost sight, grrrrrrr. 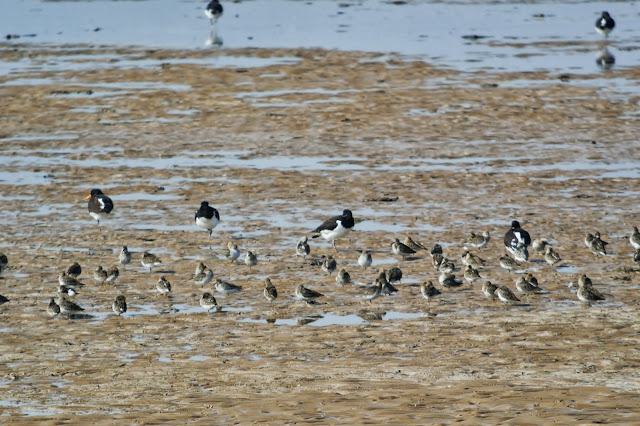 We had enjoyed our day and on the way home stopped in at The Harp at Denhall Quay for a couple of pints. It was a beautiful sunny afternoon and numerous Swallows were feeding across the marsh before no doubt making their final push back to Africa.

When I got in, I had a call from Shaun who had spotted a 'different' type bird flying between the rooftops near to his house. From his initial pictures he sent it appeared robin sized with a thin bill and had some yellow and orange tinge. It looked Redstart/Wheatear type but the plumage looked all wrong. Quite a lot of my contacts on Twitter said Northern Wheatear straight away. I have learned not to trust some pics especially in certain light, however this pic gives no doubt it is a wheatear most prob a first winter bird. First time I have heard of or seen a Wheatear in the middle of a large town, only normally near the coast. Comments would be appreciated. 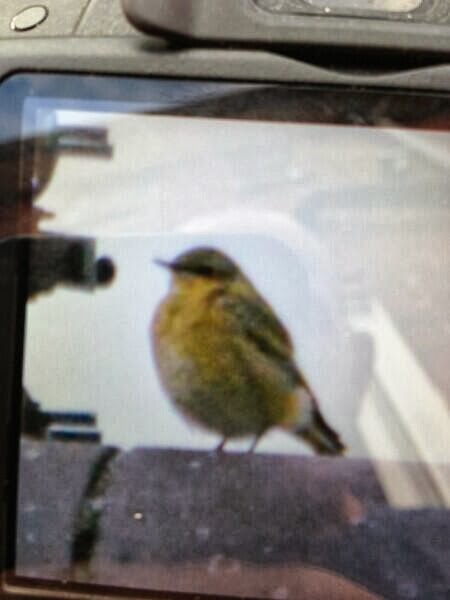 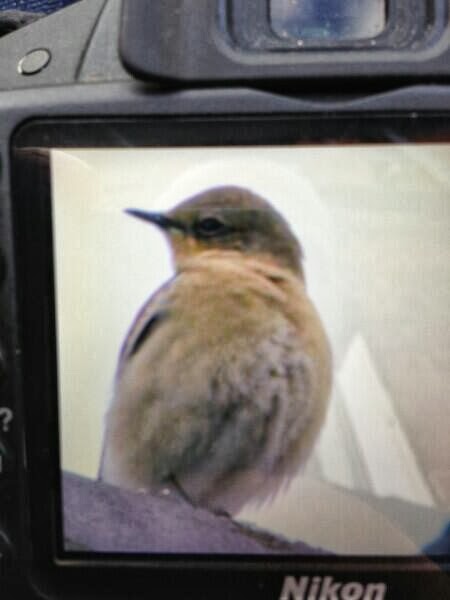 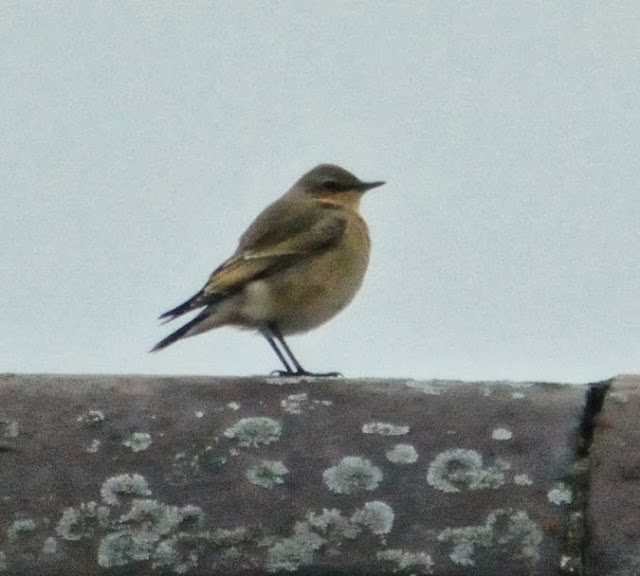 Big thanks to Keith and Heather who took the time to travel up to our neck of the woods for a visit and to the kind birders at Hoylake who were all friendly as usual.