Got a call to see if I fancied a few hours down at BMW after tea, so not having done any birding at the weekend due to cricket duties and a BBQ, I readily accepted Shauns offer.

After all the rain we had experienced over Saturday night and Sunday, the first thing that was noticeable was the water level. Where only the other week I had watched Sandpipers, Plovers and Wagtails in and around the edges on dry muddy banks, now all this was underwater. Needless to say I could see hardly any waders on the main reception scrape apart from the odd Black tailed Godwit. The light was particularly bad at around 6.15pm as the sun was directly facing, so we decided to drive round to Inner Marsh Farm.

On the lengthy walk from the car park to the hide, we noticed a distinct absence of small birds, nothing at all was spotted en route? Upon arrival at the hide, we were the only ones present. Out in front of the hide were around 100+ Black tailed Godwits (including one yellow tagged bird ringed in Iceland), in amongst the flock were some Redshank and a couple of Spotted Redshank, Lapwings but no Sandpipers could be seen anywhere.

We noticed a Buzzard flying over the nearby Wood and it made it's way across the reserve and spooked a few birds but nothing as drastic as around half an hour later when nearly every bird in front of us suddenly took to the air. We tried to see what was the cause of the sudden scare, but could not see anything amongst the sheer number of birds that had flew up. 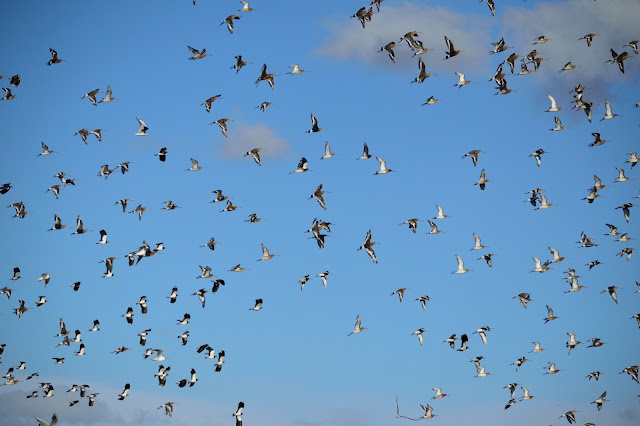 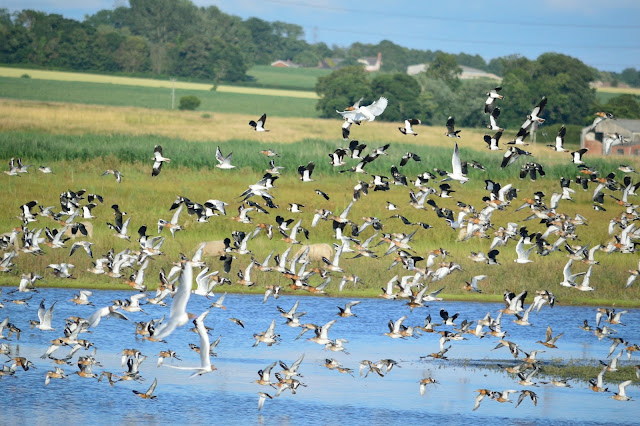 After the birds had re-settled, we got a good close view of the Redshank and Spotted Redshank, the latter being somewhat more elegant and refined in their movements and slightly larger with the longer bill. 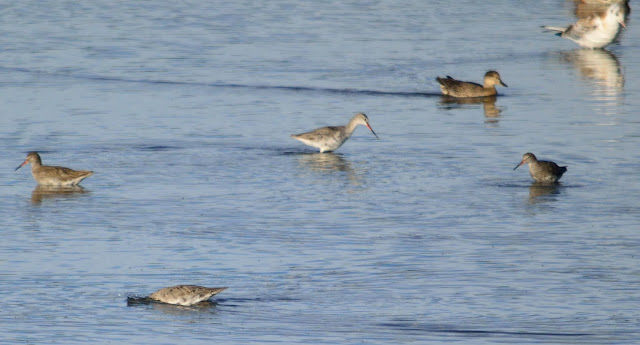 On the nearby Island the young Black Headed Gull chicks were begging for food and after some pecking and harrying of the adult birds a small amount was regurgitated and quickly gobbled up. Shaun spotted the female Marsh Harrier and we watched as she made her way past the reception hide and along the path near the feeders and then plonked herself down in the area between the reception hide and Marsh Covert Hide. Looking at the two or three occupants of Marsh Covert Hide, they were oblivious to all this as they were looking out towards us !!

Not a lot else was happening, other birds seen included, Shoveler, Mallard, Teal, several Greylags that flew in and these noisy Canada Geese that made a splash landing not too far away from the hide.

We decided to have a drive down Station Road and walk along the pathway towards Burton Point. Near the sheep pens, we flushed a Grey Wagtail and also saw a juv Pied Wagtail on the sandstone rocks nearby. Linnets and Goldfinches were in the gorse bushes and a Dunnock eyed us warily before flitting deeper into the bush. Just then I spotted a small bird of prey fly in low across the marsh and land on a post. It was a female Merlin, she did not hand around long and flew off quickly low to the ground and hugged the grass barely inches above it before twisting and turning and landing on a small mound of earth further out on the marsh. Excellent.

Nearer to the shooting range we scanned for any sign of Little and Short Eared Owls in their usual spots but had no luck. Dusk was approaching quickly and a Sedge Warbler was scratching away and also a Grasshopper Warbler had started it's reeling. Just then the female Marsh Harrier flew over Burton Point from the direction of IMF and we had good views of her hunting across the marsh before settling down in a spot to roost for the night. The latter view being not so good, but all the less grand with the backdrop of the setting sun across the marsh :) 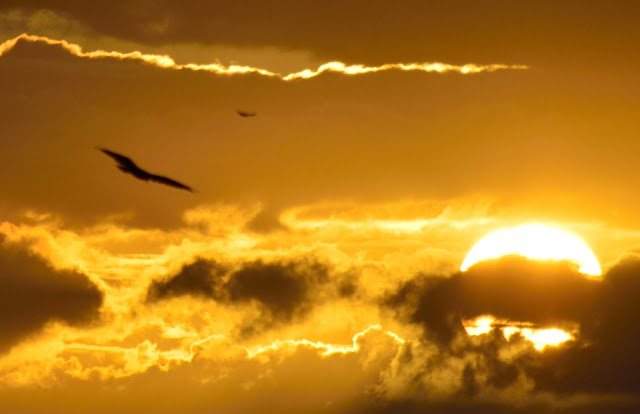 Arriving back near the van, we waited to see if we could see the Barn Owl that was known to frequent the nearby fields. It was approaching 9.45pm and after a bit of a wait, the bird appeared. Not one bird, but two were spotted. Not wishing to disclose too much info but one was a youngster :)

Great end to the evening and another first for me to add to this years ticklist now at 171.