On Saturday my birding pal Shaun had asked me if I fancied a trip to Abersoch to do a spot of birding on the Lleyn Peninsula, well who am I to refuse. As it happened, he was going anyway as he was dropping his daughter off at the Wakestock festival for the weekend. Arriving at mine at around 7am, we set off on a trip that would take roughly 2 hours. We stopped off on the way for the obligatory breakfast (although Courtney, Shaun's daughter, had requested a McDonalds) typical teenager, but I was not complaining and enjoyed my bacon and egg mcmuffin and hash brown :)

We arrived at Abersoch and the signs pointed us to the Wakestock festival and we dropped Courtney off and I'm sure she was glad to get out of the car after listening to birders going on about passage migrants and the like for hours lol. Well, did I feel old, hundreds of teenage kids were wearing their finest festival gear, which as the sun was blazing did not amount to much!! Shaun said his goodbyes and so off we set to see what was about. We followed the coastal road and after a ten minuted drive down a small coastal path, parked up and decided to walk down a public footpath towards the sea cliffs.

It was around 10.30am and the sun was very hot, we negotiated the footpath and went past a chicken farm and across a meadow, the first birds spotted were Whitethroats, we then sighted a Great Spotted Woodpecker which seemed an unusual bird to spot in these surroundings. We watched as it flew onto a post on top of the cliff path!! On some wooden fence posts was a family of young Stonechats, conspicuous by their white wing bars. 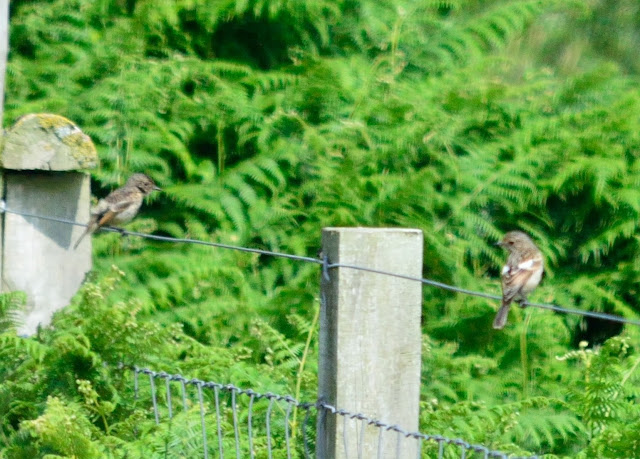 This area was simply stunning, with meadows suddenly dropping down onto a coastal path adorned with gorse and giant ferns. Some large bushes disguised a freshwater stream which could be heard flowing down towards the sea and I thought what a fantastic spot this would be for migrants to rest up :) I spotted something out of the corner of my eye and a Peregrine was having a tussle with a Sparrowhawk!! Most probably because the Sparrowhawk had made a kill and the Peregrines were after it's grub!! 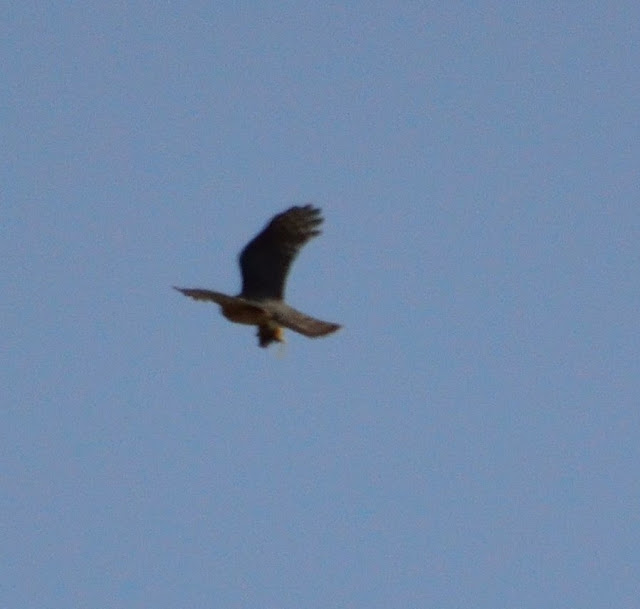 I shouted Shaun to get ready with the camera as the birds had passed over the bushes on the cliff, but just then the Peregrine re-appeared and flew straight over our heads, simply breathtaking. 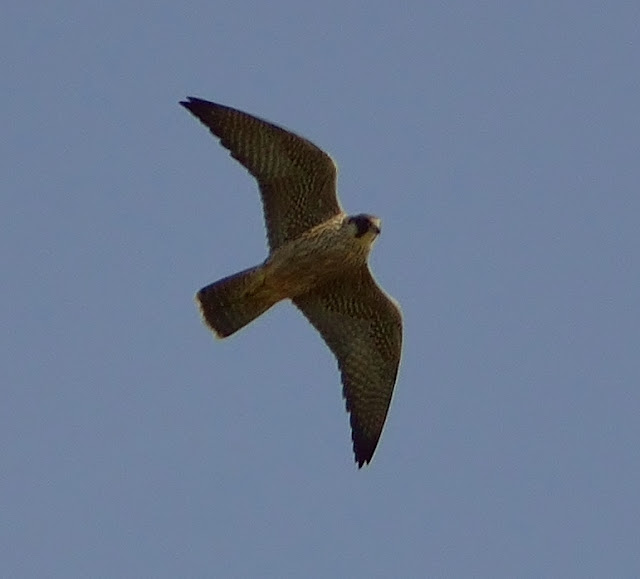 After watching the bird for a few minutes it disappeared so we headed on down the path. The small stream was now visible running down between lichen covered rocks and just then Shaun spotted a Rock Pipit busily feeding on small insects by the water. 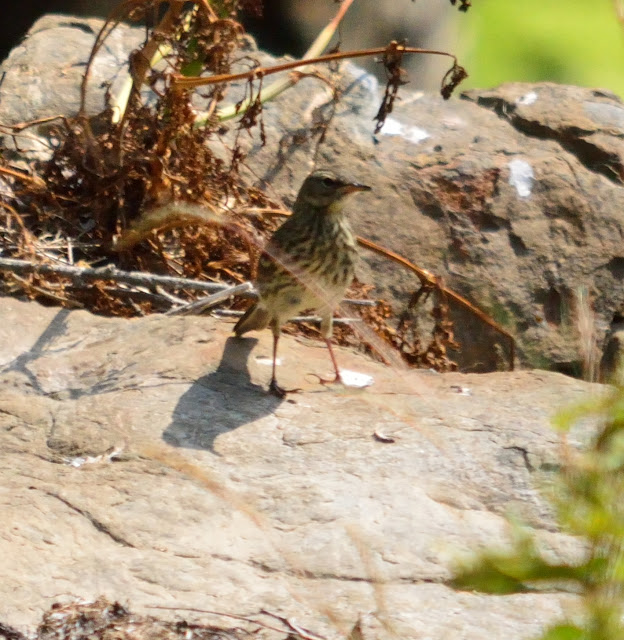 The view of the bay was magical and there was a sea mist hanging over the water and it just looked like a dragons breath. The water was a deep blue and crystal clear. Some Guillemots sat on the water further out and a pair of Shags were preening themselves on the rocks nearer to the shore. A huge cave could be seen that must have no doubt been formed over the years by the erosion of the seawater on the rock. 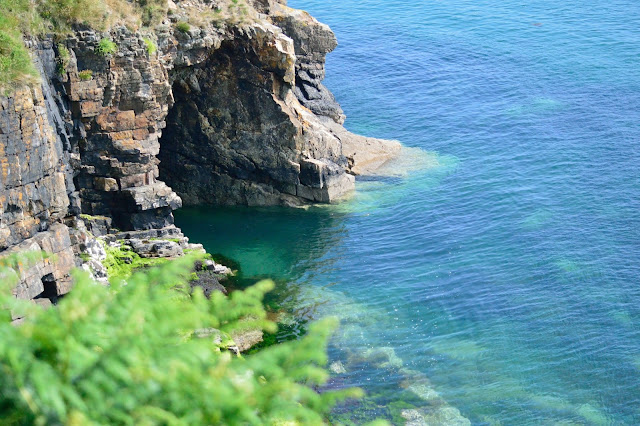 People were enjoying the sun and sea and a few yachts were sailing along and a young couple waved up to us from their speeding jet-skis. In the fields adjacent to the coastal path, Shaun found a large pellet that must have been regurgitated by a bird of prey, he investigated Chris Packham style and after breaking it up, we could see it had beetles and small bones in it, lovely ;) A Meadow Pipit came into view and alighted on a nearby fence, three Goldfinches were tinkling in a nearby bush and a family of Linnets were singing along and the male bird looked just dandy. 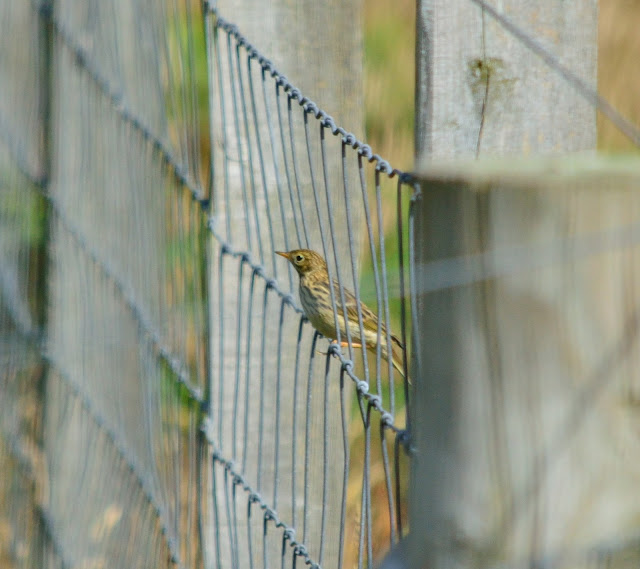 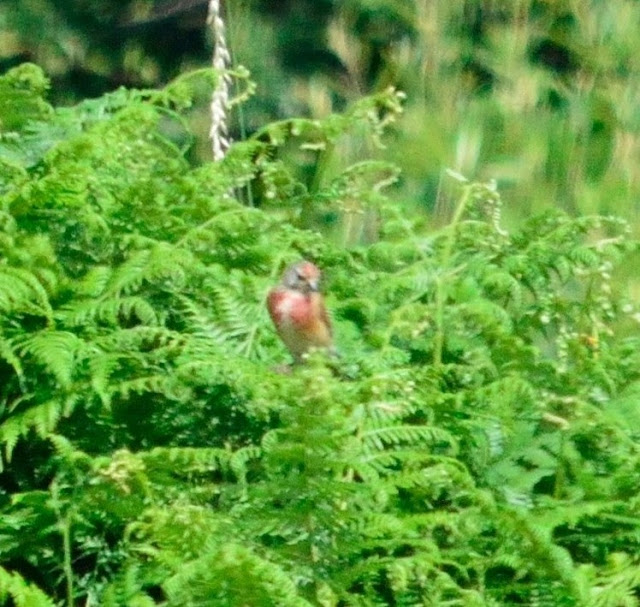 I then heard the Peregrine calling and looked up to see a pair hassling a Buzzard that was circling over the cliffs, wow could this day get any better? The Buzzard looked not that bothered and rolled over each time one of the agitated Peregrines got too close. 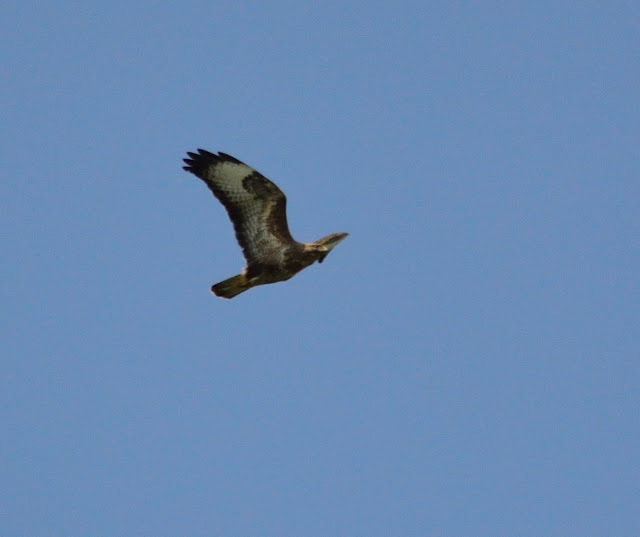 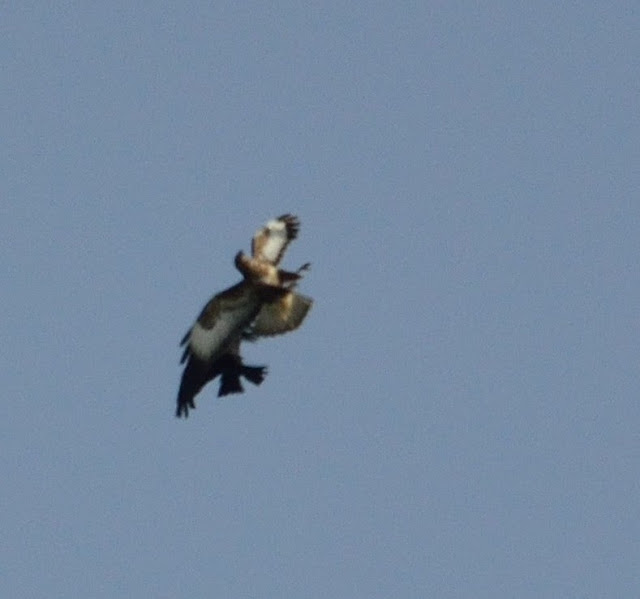 This was great to watch and after about ten minutes, the birds moved on further up the coast. It was getting hotter, so we decided to go back towards the car and take a trip towards Nefyn. Walking back through the meadow we spotted a lot of butterflies and a large dragonfly. The butterfly I think is a Small Heath, although will stand corrected, the dragonfly we believe is a Golden Ringed dragonfly, here are a couple of pics below 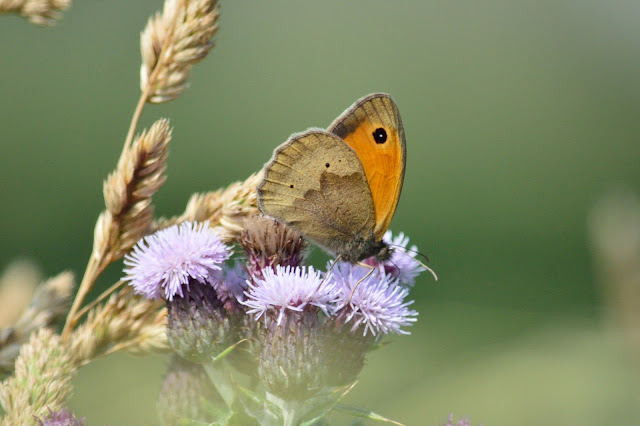 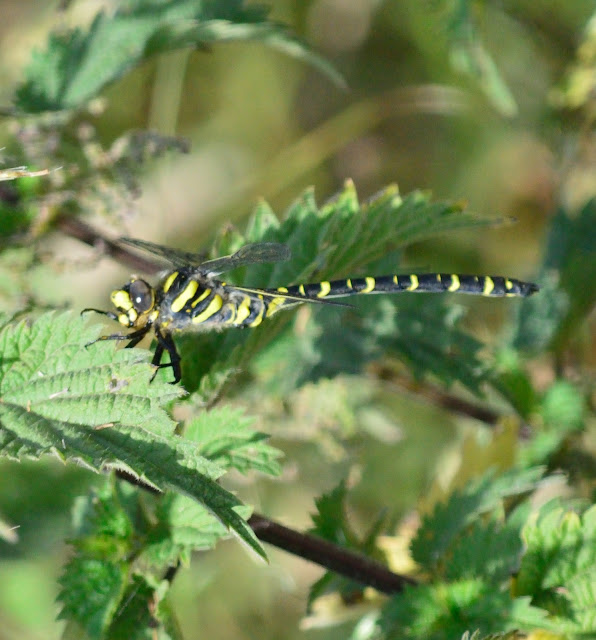 I spotted this very small butterfly and have had a look on the t'internet but cannot see what it is?? Can any one help please. 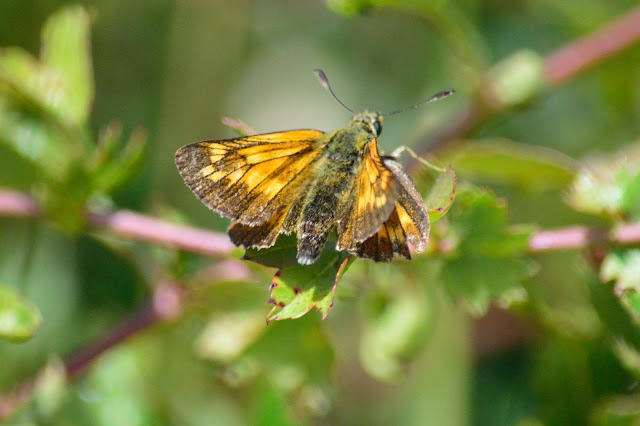 This had turned out to be a great spot to see wildlife and we will definitely be back to this spot in the Autumn to find passage migrants and maybe a Mega!! Alan & Ruth (of biggesttwitch fame) had told me to stop off at Pwhelli harbour, but the town was that busy with festival goers and holidaymakers and traffic that we sadly decided to move on to the west side of the peninsula to Nefyn. When we arrived here, it was a lot quieter and we parked up and again went down a public footpath and across some fields towards the coast. As we parked up a Kestrel was sitting on top of a telegraph pole and was being mobbed by some young crows, very funny to watch. 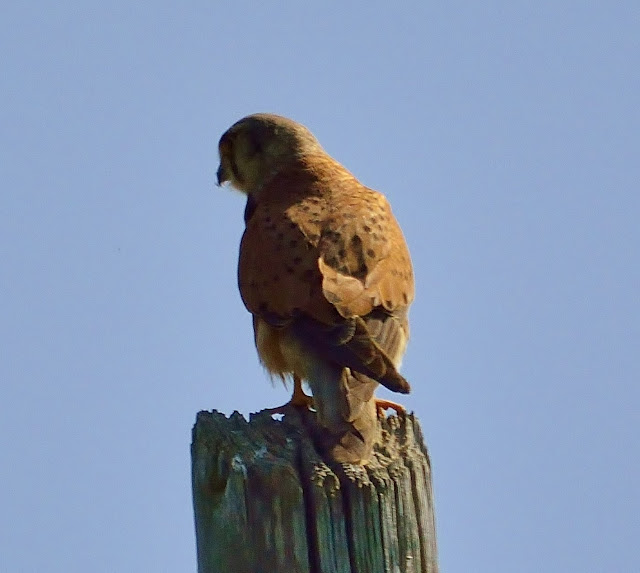 It was evident the crows and jackdaws were doing well here as there were hundreds of birds along the route down to the coast. When we got to the edge, the view was stunning.

Out at the end of the shingle beach, the rocky outcrop was full of birds including Razorbills and Guillemots which were flying in and out of the rocks to and from the sea. I spotted a Buzzard sitting on the rocks down below and gave it a call in my finest Buzzard impression, to Shaun's astonishment (or embarrassment) the bird responded and called back, myself and the Buzzard kept this up for about two or three minutes before the bird had enough and flew off for a bit of peace :) A few Whitethroats and the odd Meadow Pipit, but very quiet on the warbler front today? We needed a bite to eat, so set off back up the coast road passing through Caernarfon where a considerable jam had built up in the opposite direction due to a smash at some traffic lights!!

Now we had heard of a place called The Spinnies in Aberogwen, so decided to call in as it was on our way to RSPB Conwy, where we planned to also call for the last hour. Parking up we made our way to the hides that overlook a coastal lagoon and a freshwater pond. Wow, the tide was in so we saw over 100 Mute Swans out on the lagoon

along with, Goosander, Red Breasted Merganser, Great Crested Grebes, Oystercatcher, Curlews and a small flock of Eider duck all females!! 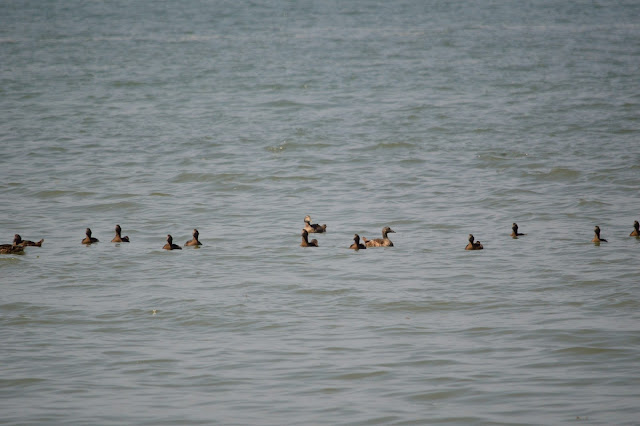 The hide we sat in was a first for me as on one side, you looked out over the coastal lagoon and the other windows looked out over the freshwater pond where we could see Little Egrets, Grey Herons and some Little Grebes, magic :) Just before we left, a Common Sandpiper flew over to our side of the Lagoon and stayed for a while before a man with robot like movements suddenly appeared on the shoreline (which made a mockery of the hide) and scared it off !! 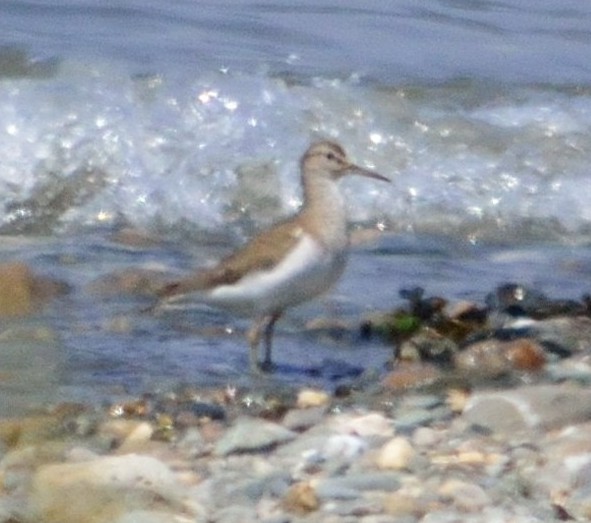 Time to move on however as it was late afternoon, we stopped off at Morrisons for a sandwich and some much needed water and arrived at RSPB Conwy shortly after.

Walking through the reed beds on the way to the hides, we saw Reed Buntings and heard Reed Warblers. out on the waters edge we spotted a nice Greenshank feeding. 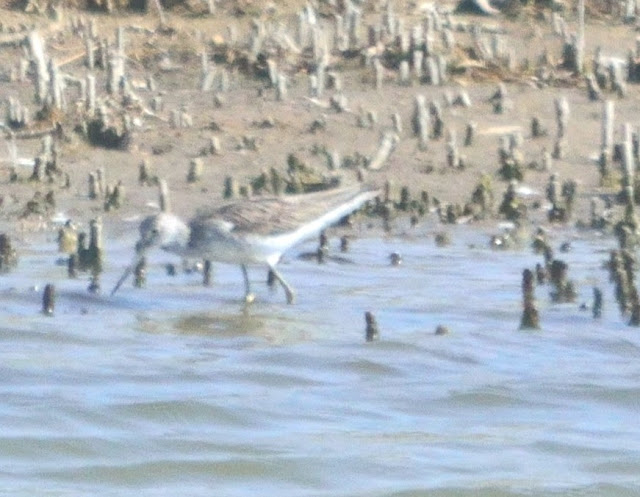 A new screen has been erected at Conwy and this gives good views of the other sides of two islands which you would not get to see from the main hide, so it's nice and sheltered and produced some Redshank, Curlew and a couple of Whimbrels which are a lot smaller than the Curlew when viewed side by side. 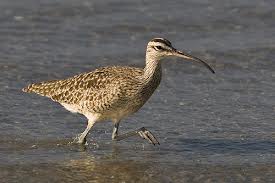 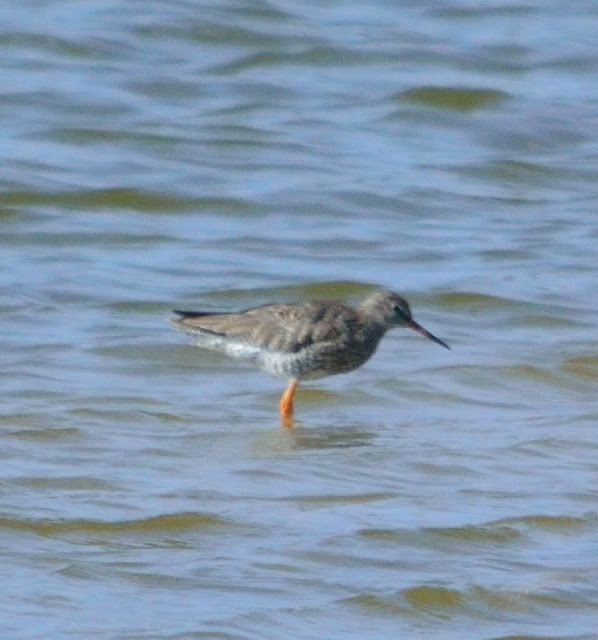 All in all it was a great days birding and we ticked off 72 species and could have had a lot more if we went to a woodland habitat, however it was too hot today so enjoyed the coastal breeze and the beauty of the simply stunning Lleyn Peninsula and the Welsh coast. I would recommend this area to anyone with an interest in wildlife, there is simply so much to see and so little time to do it in. We will most certainly be returning in the not to distant future.