With news of the first Spring Wheatear on show yesterday, I decided on a trip up to Leasowe. I got the train around 8am and arrived at Moreton station just before 9am. Walking down the path into Kerr Fields, I flushed 3 Bullfinch and numerous Goldfinches. A cock Pheasant was calling in amongst the tall grasses also.

When I arrived I bumped into Ken & Dave local birders who are here most days, they were also hopeful of migrants, in particular looking out for Sand Martins passing through! As I arrived at the seafront, I could see the tide was back on it's way out and the sandbanks were well exposed. A couple of Lesser Black Backed Gulls stood out with yellow legs and slate grey backs. In the background a number of Oystercatchers were on the sandbar, roughly 300 birds. 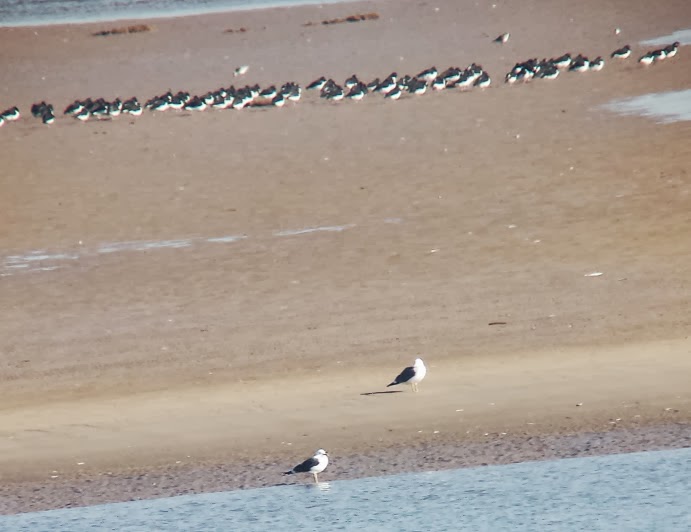 Also quite a way out was some Knot, Grey Plover, Redshank & Dunlin. Fortunately some Redshank were a bit closer and allowed me to get this shot whilst they had a nap, with a small Dunlin in amongst them! 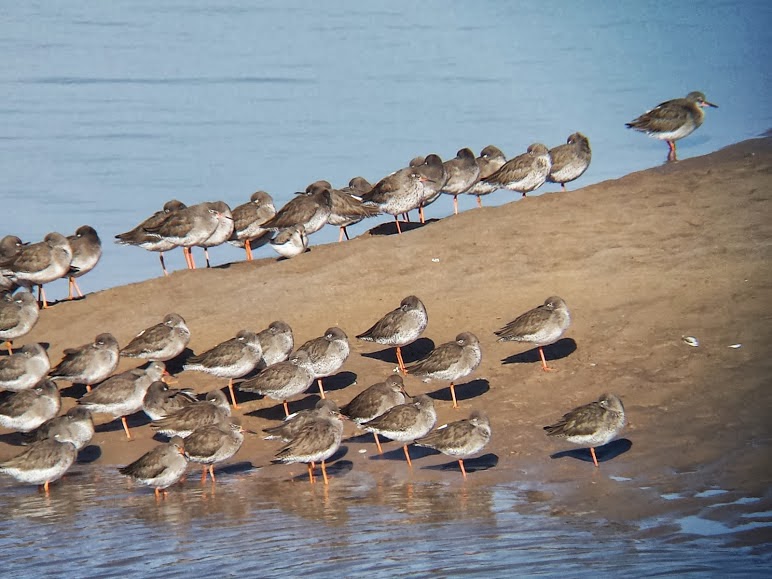 In the channel where the tide streams through I spotted two or three Little Egret. I got this shot of one fishing for small sandeels. 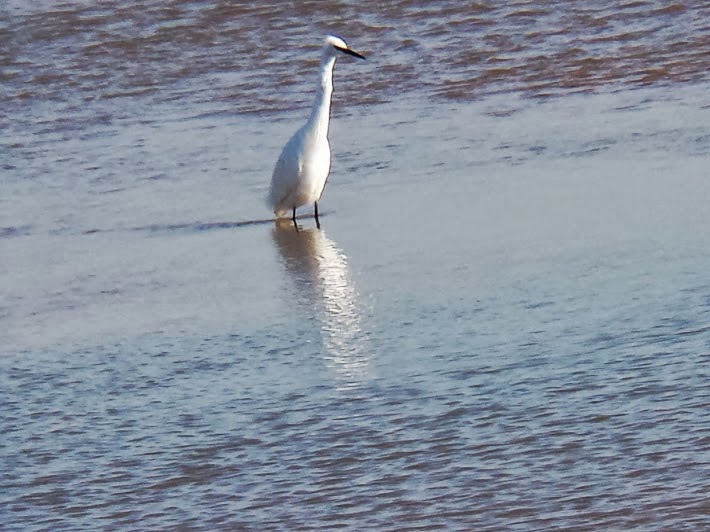 There was plenty of noisy Black Headed Gulls and a few very large Herring Gulls calling noisily. This one seemed to be eyeing me up for my sandwich! 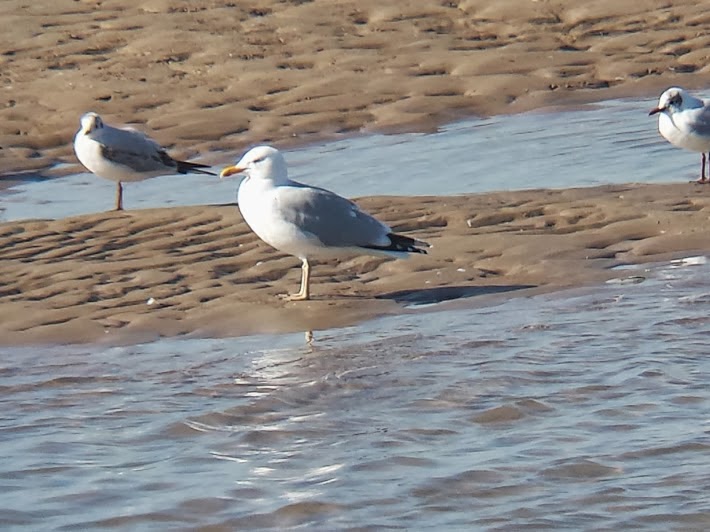 A quick look out to sea did not produce much, a few Pied Wagtails flew in, a pair of Shelduck and a few Cormorants. Some Turnstones were feeding on seaweed close in by the shore and bickering amongst themselves as they raced along the seafront. 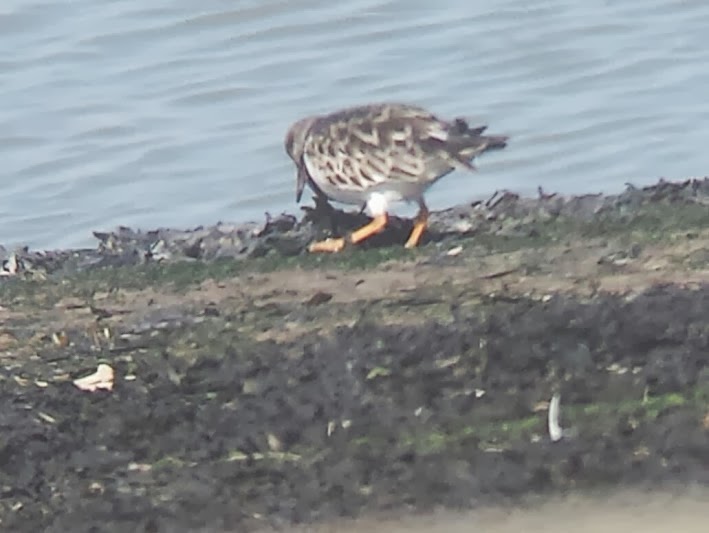 Also out to sea was a small boat going past the 25 wind turbines that are out on the horizon. It was dwarfed by them. Got this phonescoped shot. 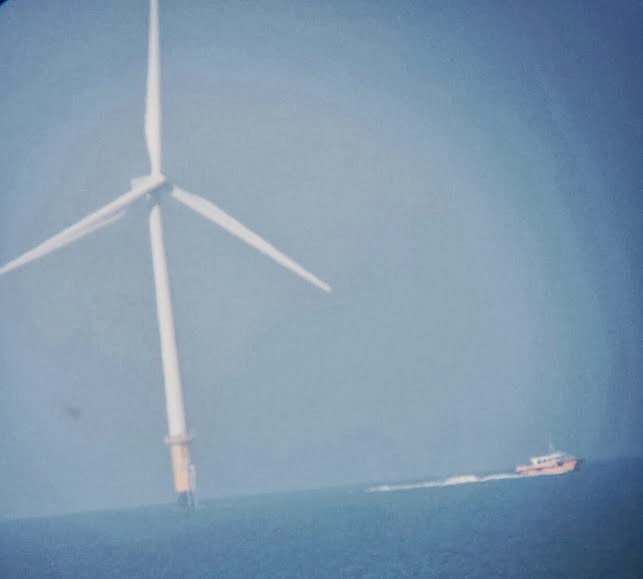 It was time to have a look at the horse paddocks at the back where there has been a couple of Twite spotted the last few days. These are migratory birds that winter near coasts and are just about set to return to breeding grounds further North. I was hopeful of a new yeartick. Scanning the fields I could see some Skylarks feeding at the very back and some were also up singing, a beautiful song! 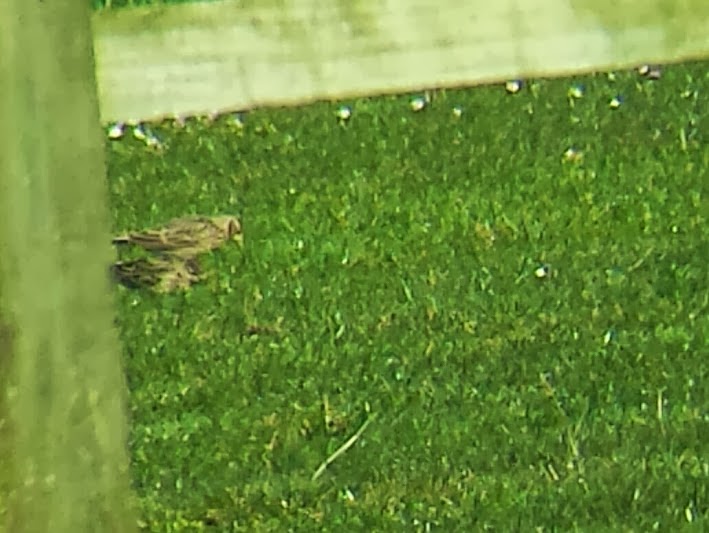 I spotted a Cock Pheasant creeping along the fenceline and when he spotted me he craned his neck for a better look. Lovely colours :) 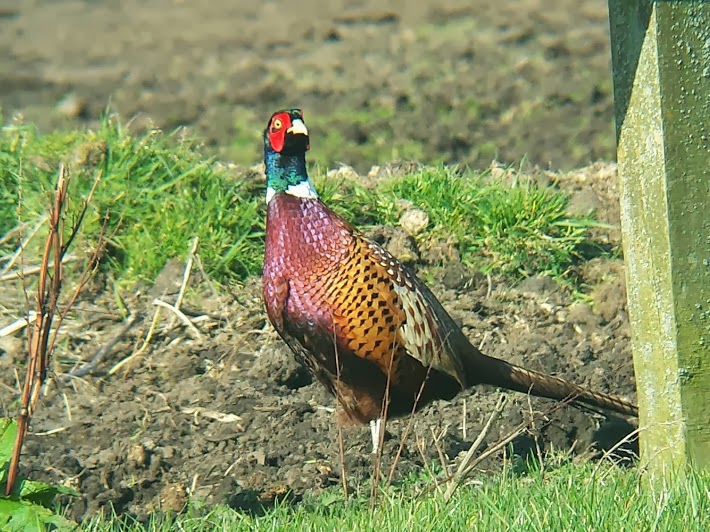 Then I spotted a couple of Pied Wagtails who had just flown over onto a nearby mound. 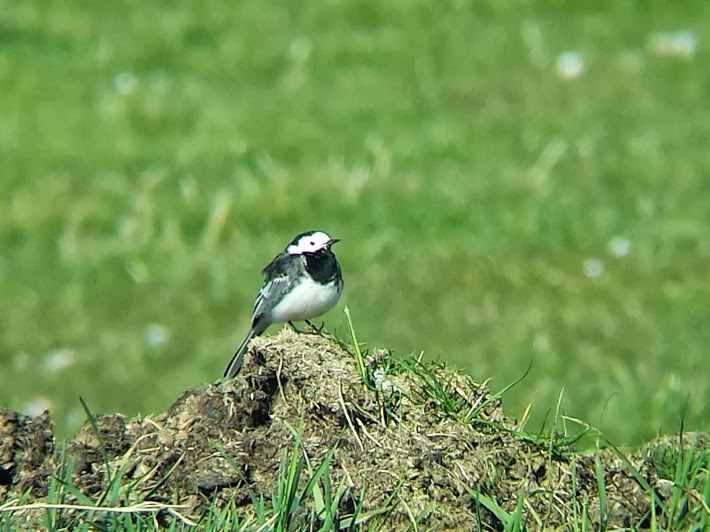 After pacing up and down the paddocks, no sign of the Linnet flock that was supposed to contain one or two Twite. Down at the Western Kissing Gate there is a farmyard with roosters, it was in this field area that I located the Linnets and the Twite!! I just got set up to take a picture and had a great close up photo when (you've guessed it) off they went, startled by a couple of cyclists passing through in the nearby lane! Dammit. After a long search to relocate, I eventually saw the flock a bit further back into the fields. I managed to capture some Linnet feeding near a big fat Wood Pigeon. 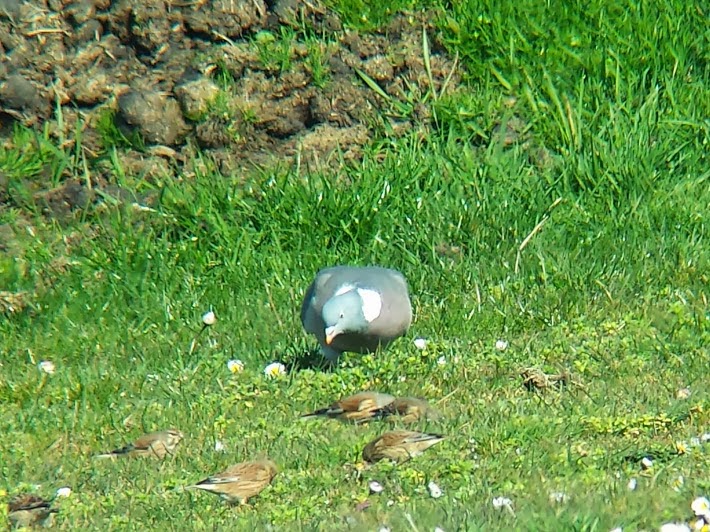 They flew up again and amazingly after circling overhead for a few minutes, landed quite close. I scanned the flock and bingo, just the one Twite with a darker body and yellow bill. 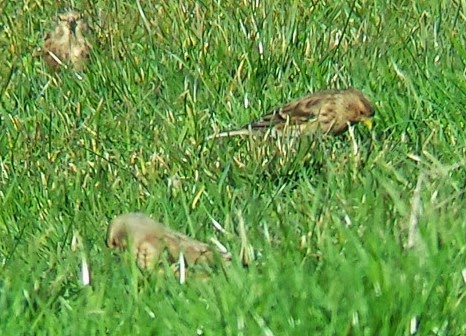 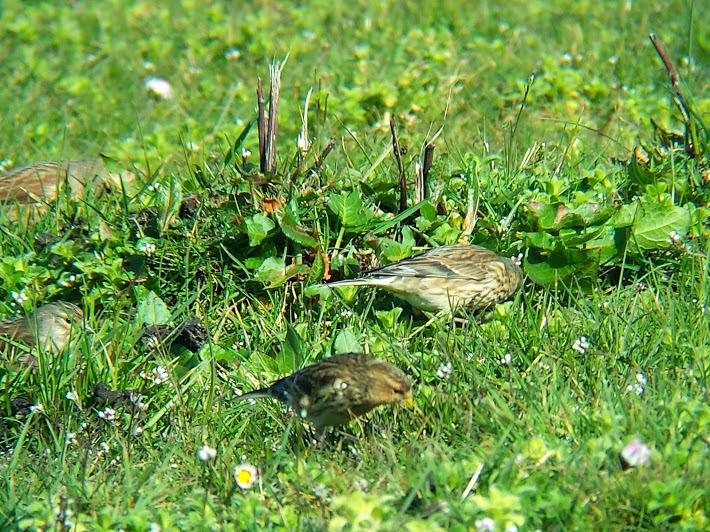 After watching these lbj's for a while, I went around the back of Lingham Lane to see if I could see any Wheatears in the other fields as none could be seen in the horse paddock areas or fields nearby. To be honest it is still early and usually early migrants like yesterdays male Wheatear don't stop for long, just a quick refuel and off further North.

The River Birket runs through Lingham Lane and I spotted a couple of Mallard and a Moorhen on the water. A Grey Heron flew over and three Carrion Crows were squawking their annoyance at a Buzzard rising on the thermals. This was the area where last year we had spotted a Turtle Dove. Scanning the fields, no sign of Wheatear, so it was getting near to 2pm so I decided to make a move back to the train station.

As I boarded the train I checked birdguides and saw that a Swallow had been seen in Billinge, Lancashire! One Swallow does not make a Summer, but more interestingly the first Ring Ouzel has landed at World's End in Clwyd! I will defo be making a trip back up to Leasowe in the near future as the Ouzys are known to call in on their passage through :-)