After all the bad weather we have had myself and Shaun planned a trip over to Hilbre Island. High tide was at 3.08am so when we arrived at 7.15am, the tide was on it's way out and it was safe to cross. The wind was quite strong blowing in a south-westerly direction and it was quite cold for a spring morning. Looking around the boating lake it was bleak and there was just one 1st winter Herring Gull sitting on one of the pontoons.

The walk over to Little Eye was uneventful and we never saw any birds at all, not even any flyovers! When we reached Middle Eye however we spotted a female Merlin flying low over the rocks, she then landed and enjoyed a look around. Shaun spotted another raptor nearby and it disappeared behind some rocks. It then flew out and started to fly up (flap flap glide) whilst being mobbed by some angry gulls, it was a Sparrowhawk. It flew out of sight and around the back of middle eye. The view towards Hilbre from Middle Eye....... 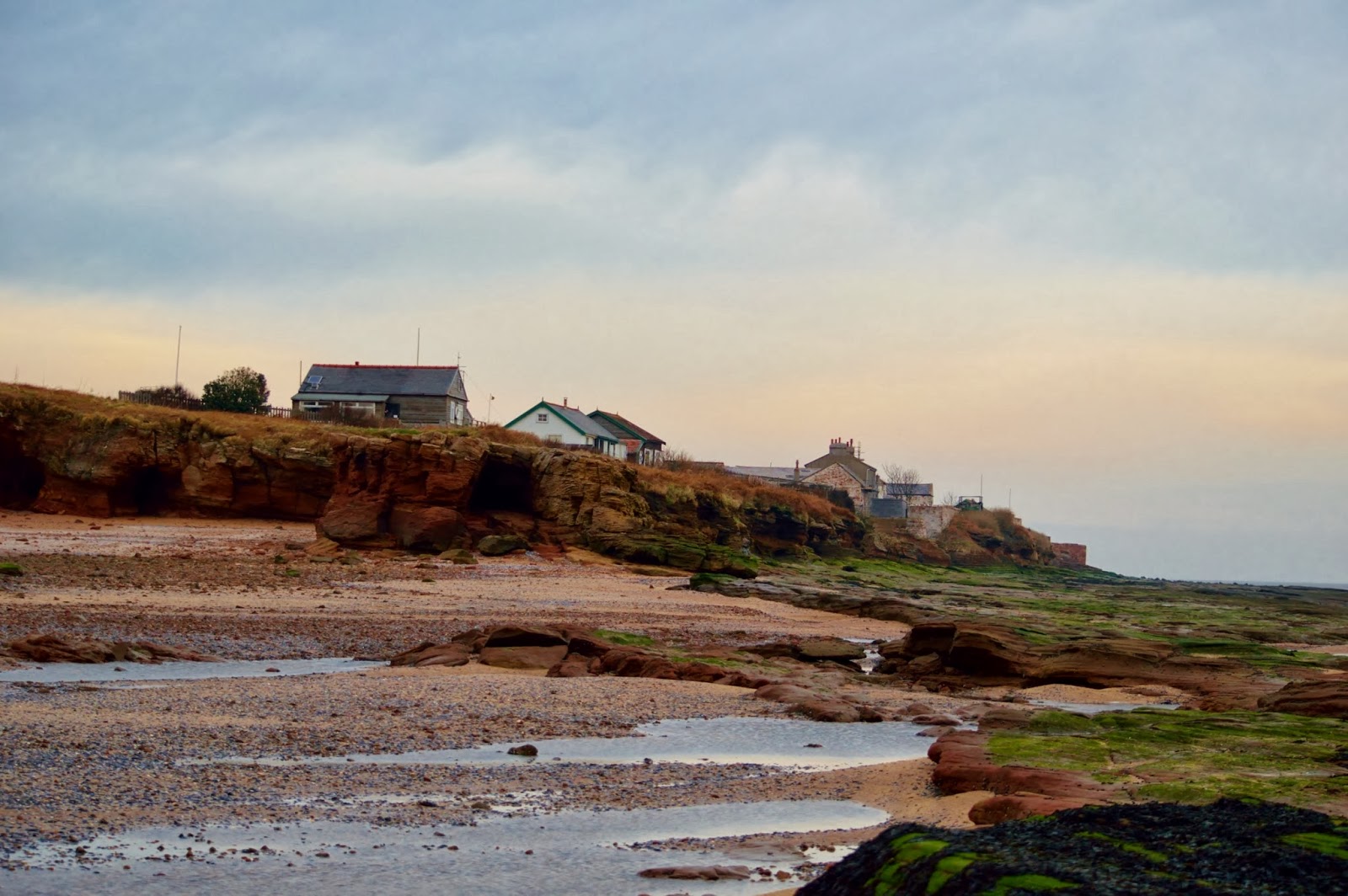 We saw some movement of Pied Wagtails and then I spotted a White Wagtail that had flew in a southerly direction from Hilbre and landed on some algae covered rocks. This was the first White Wagtail of the spring seen at Hilbre (later confirmed by Steve Williams from Hilbre Obs) who had also seen the bird fly over. About 6 days earlier than last years first sighting! As we walked on towards Hilbre, we flushed the Sparrowhawk from a rocky outcrop and it flew towards the main island. Shaun managed this shot as it flew away. 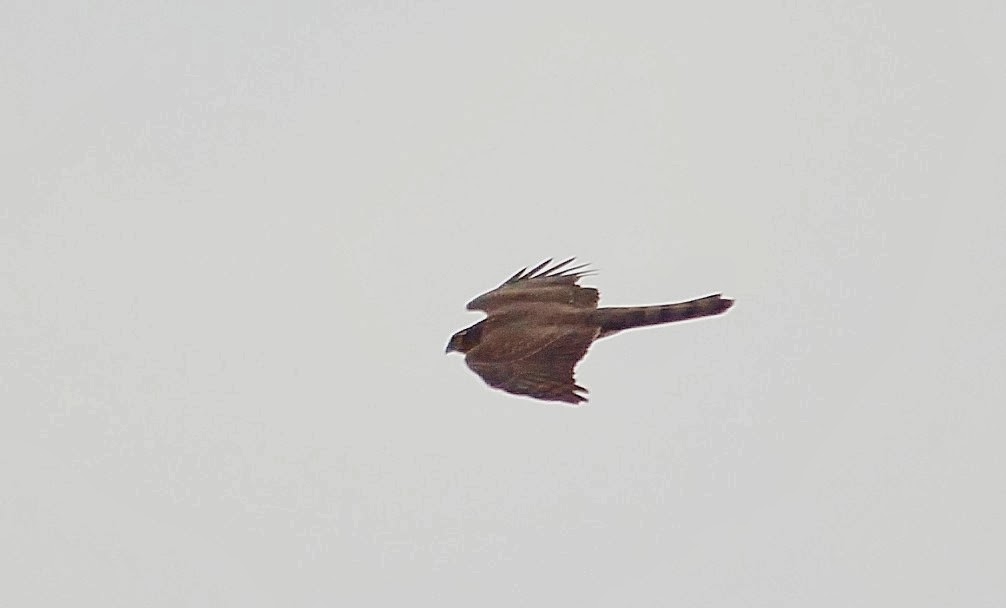 We could now hear and see a few Curlews on the west of the island and a small number of Oystercatchers and large gulls. As we walked up the ramp towards the obs and the houses, we could hear Meadow Pipits calling and there was quite a number about today, fifty birds at least we spotted throughout our stay. 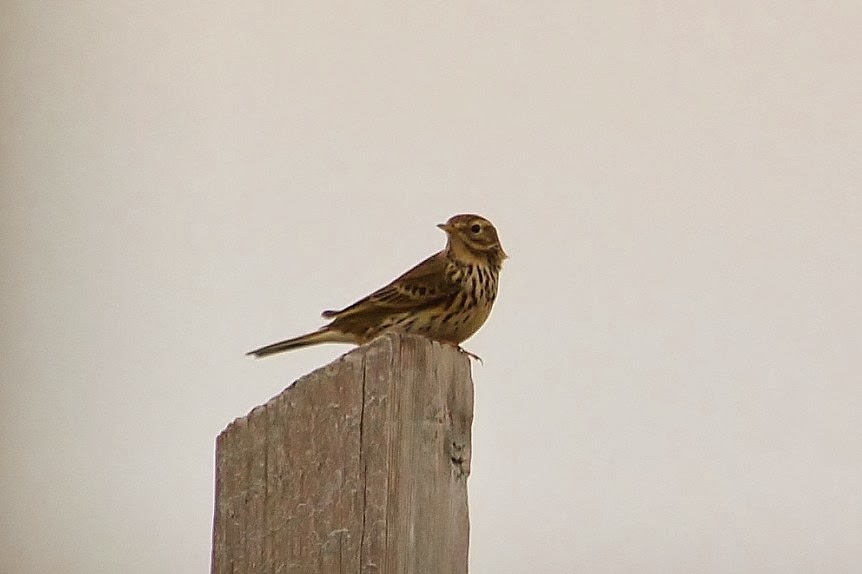 On the rocks on the west side of the island we spotted the Pale Bellied Brent Geese, they were busily feeding and some gave the odd gargling guttural call. 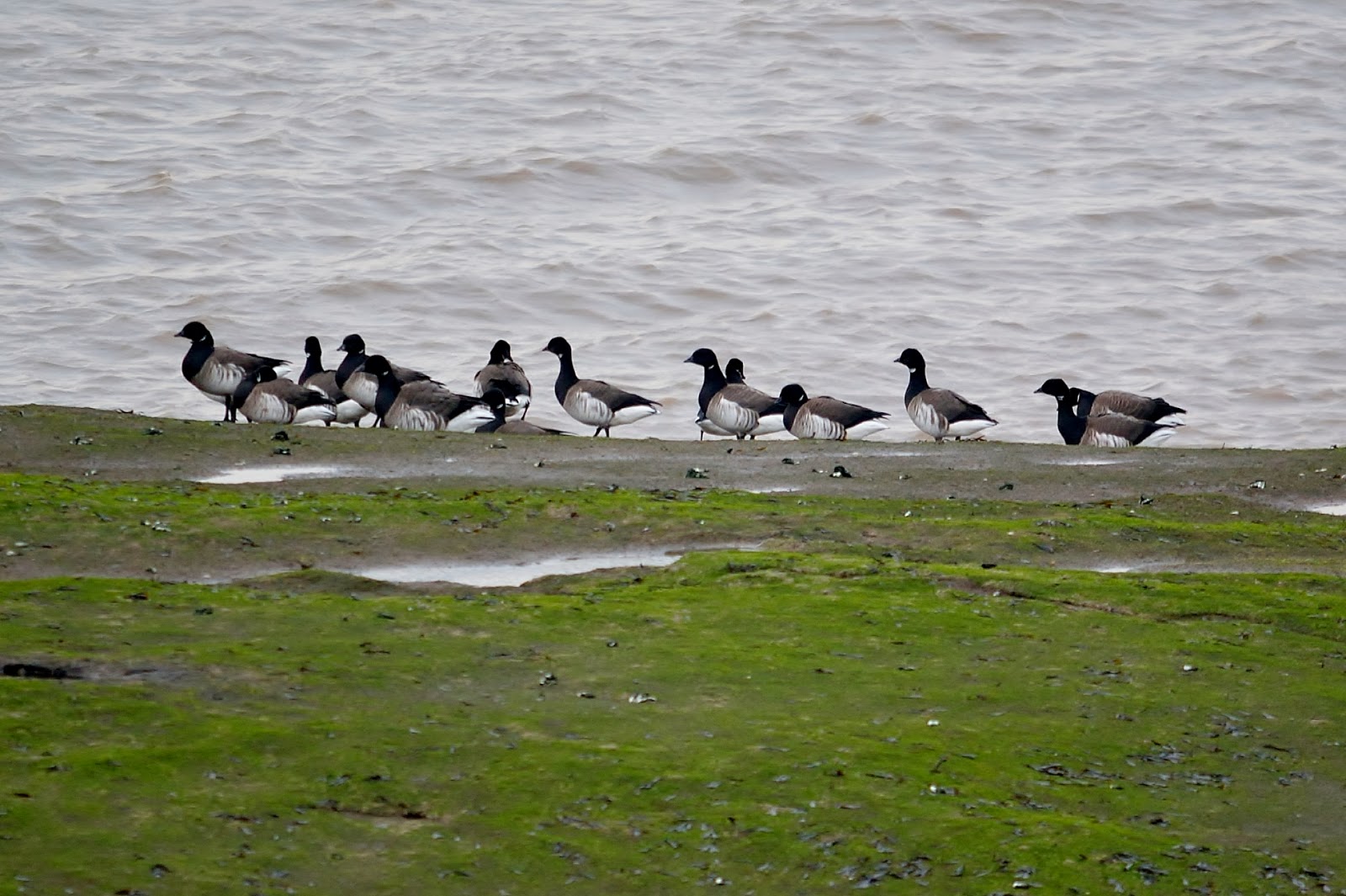 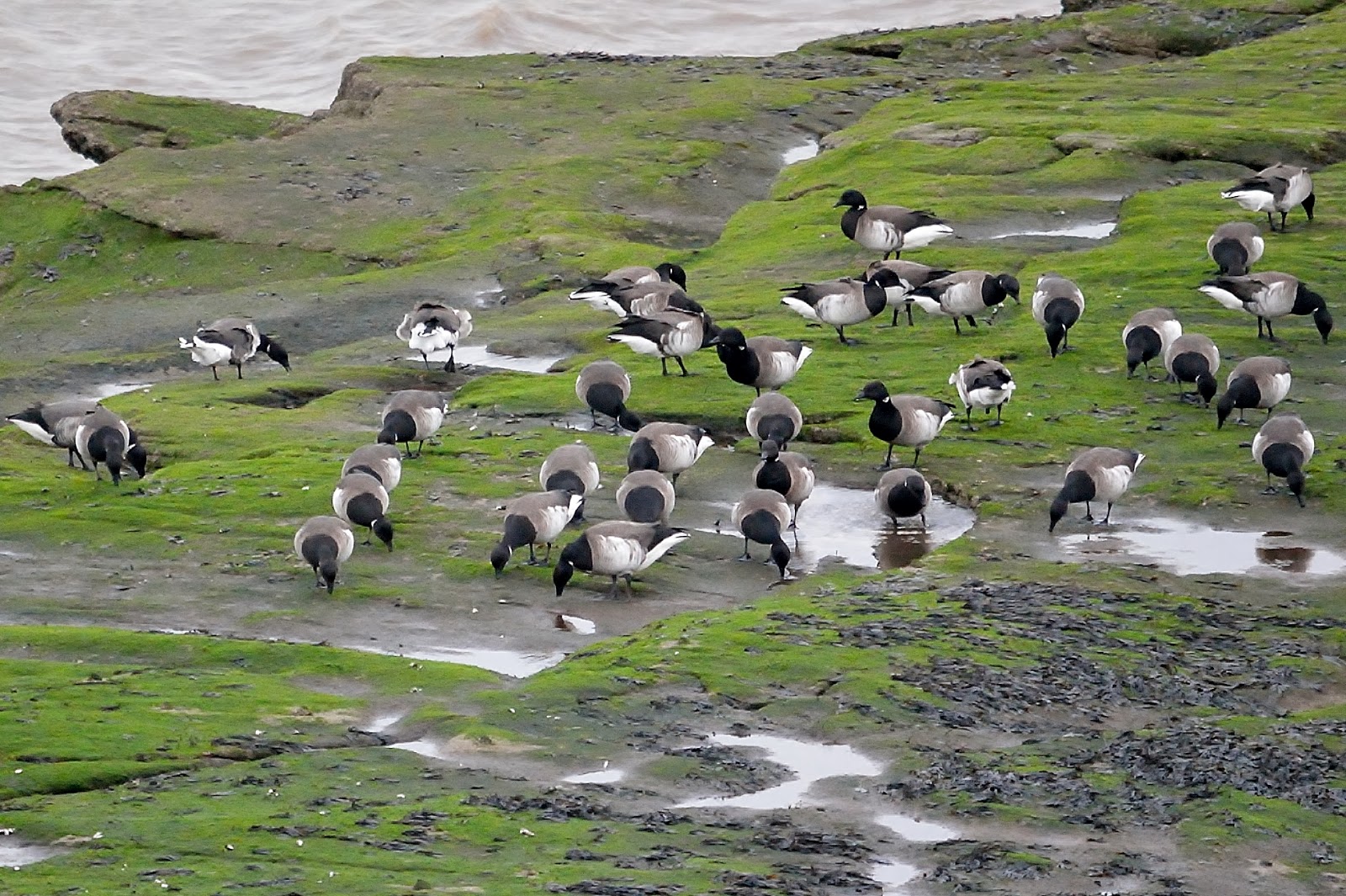 No doubt they will soon be returning to their breeding grounds in Canada. One bird was a colour ringed bird with a red ring on the right and a blue on the left. Could be a bird (HDRB) that was ringed on Axel Heiberg Island in Arctic Canada in 2007? 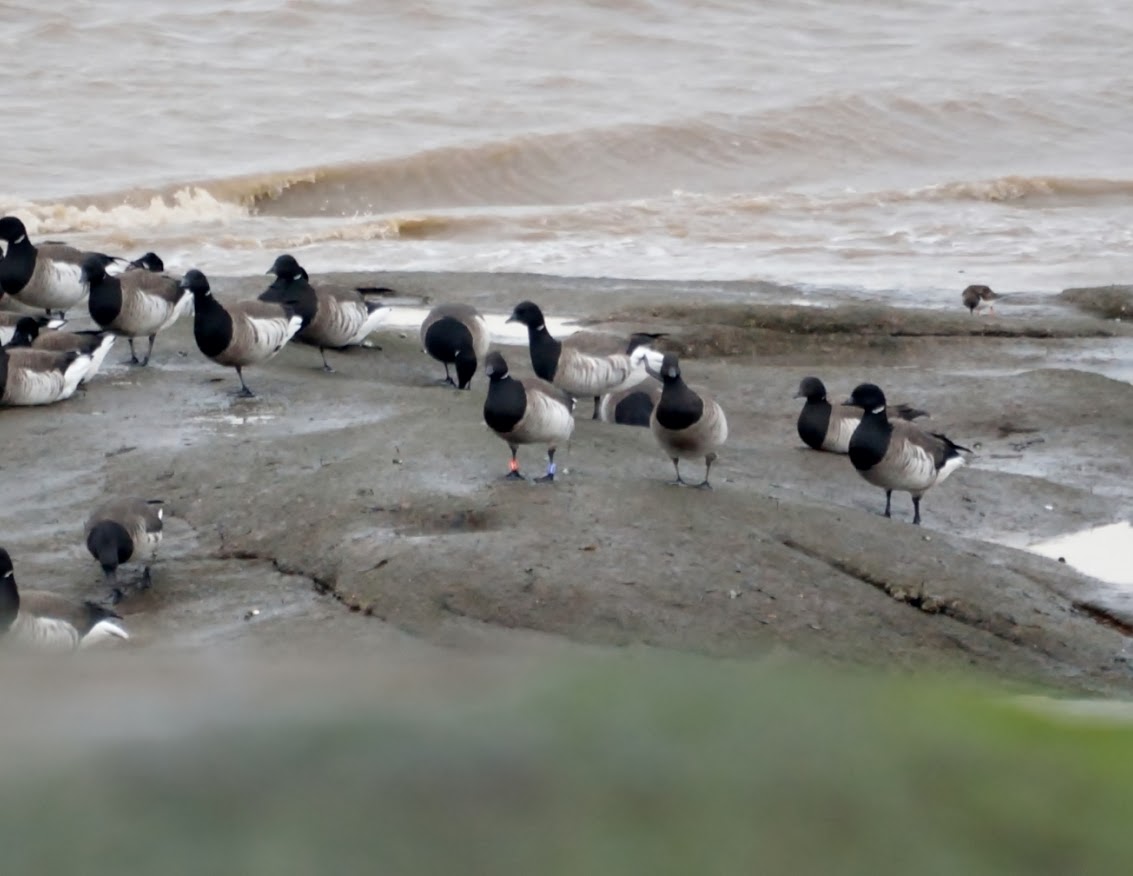 Four Blackbirds flew over in the swirling winds as we headed to the old lifeboat slipway for a seawatch.

The slipway gave some respite from the biting wind and after setting up the scope I scanned to see what was around. Several Great Crested Grebes were feeding out to sea and small numbers of Cormorants were flying over. 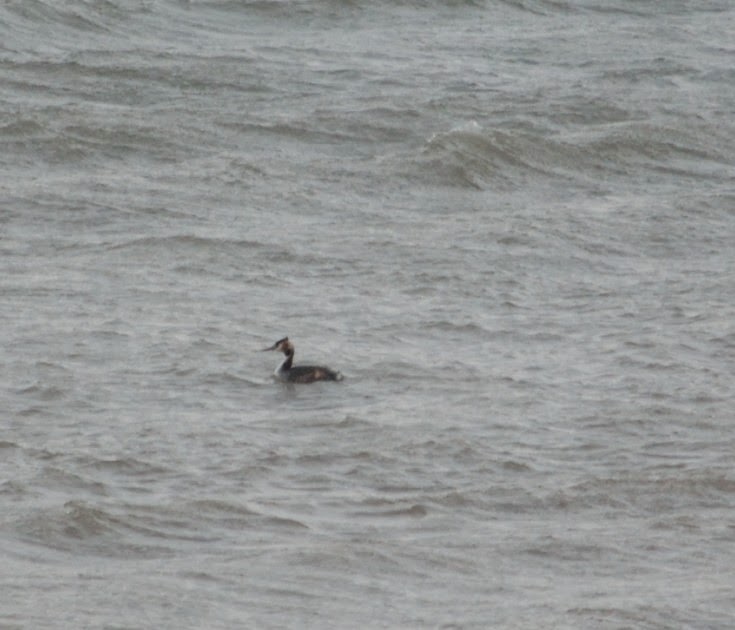 Shaun spotted 3 Common Scoter just to our left, two males and a female quite close in near to the island. These are dark black birds and the males have a yellow spot on the bill which can be very striking, even from a distance! 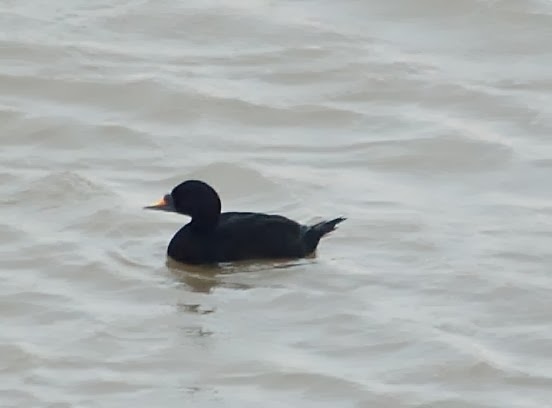 One of the Scoters was getting in a bit of a flap as you can see in the next photo, the female sat on the rocks unimpressed. 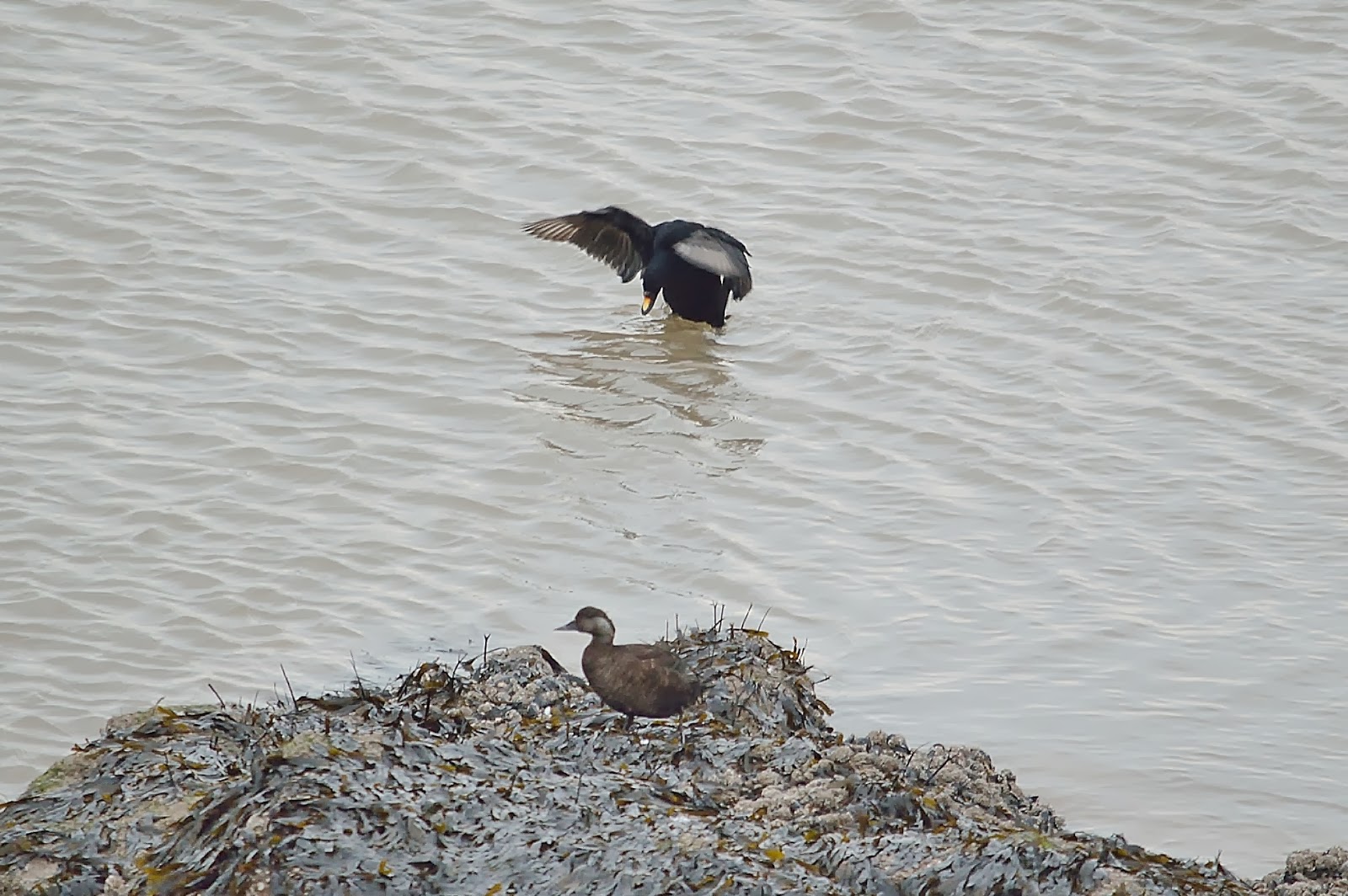 Just then Steve Williams and a few of the guys from the bird observatory (obs) came down and after saying hello, said they would notify us later if they caught anything in the traps for ringing. We had been looking out to sea and noticed what appeared to be a shipwreck. We were advised this was the SS Nestos a greek transport boat that ran aground on sandbanks at low tide on 2nd April 1941. Affectionately known as 'The Greek' it can be seen at low tide and makes a good perch for seabirds!! 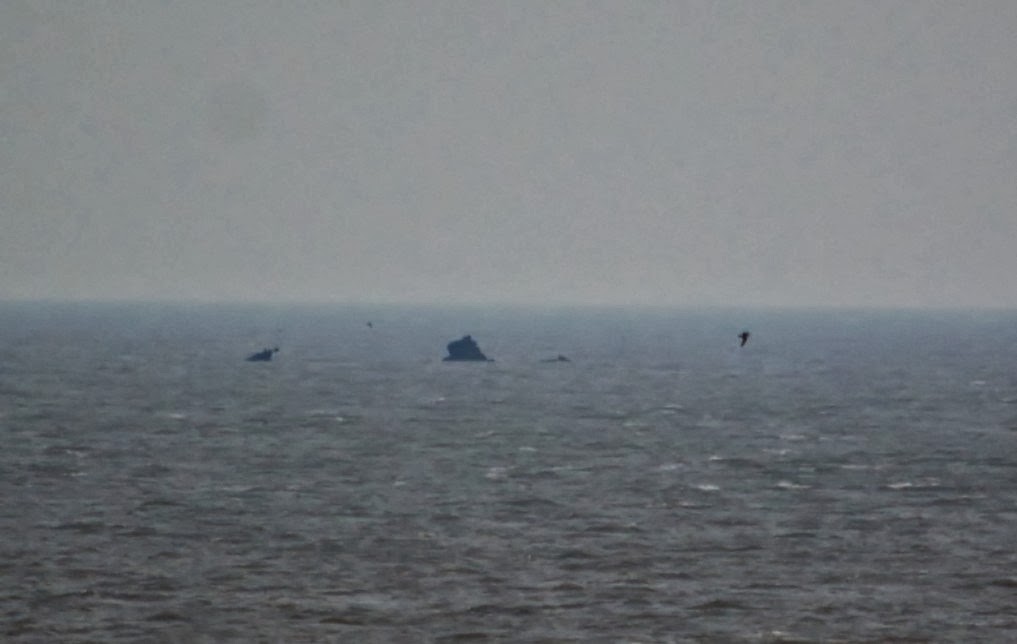 As we were watching a small group of Pintail flew in 4 male and 4 female birds accompanied by a male and female Wigeon. 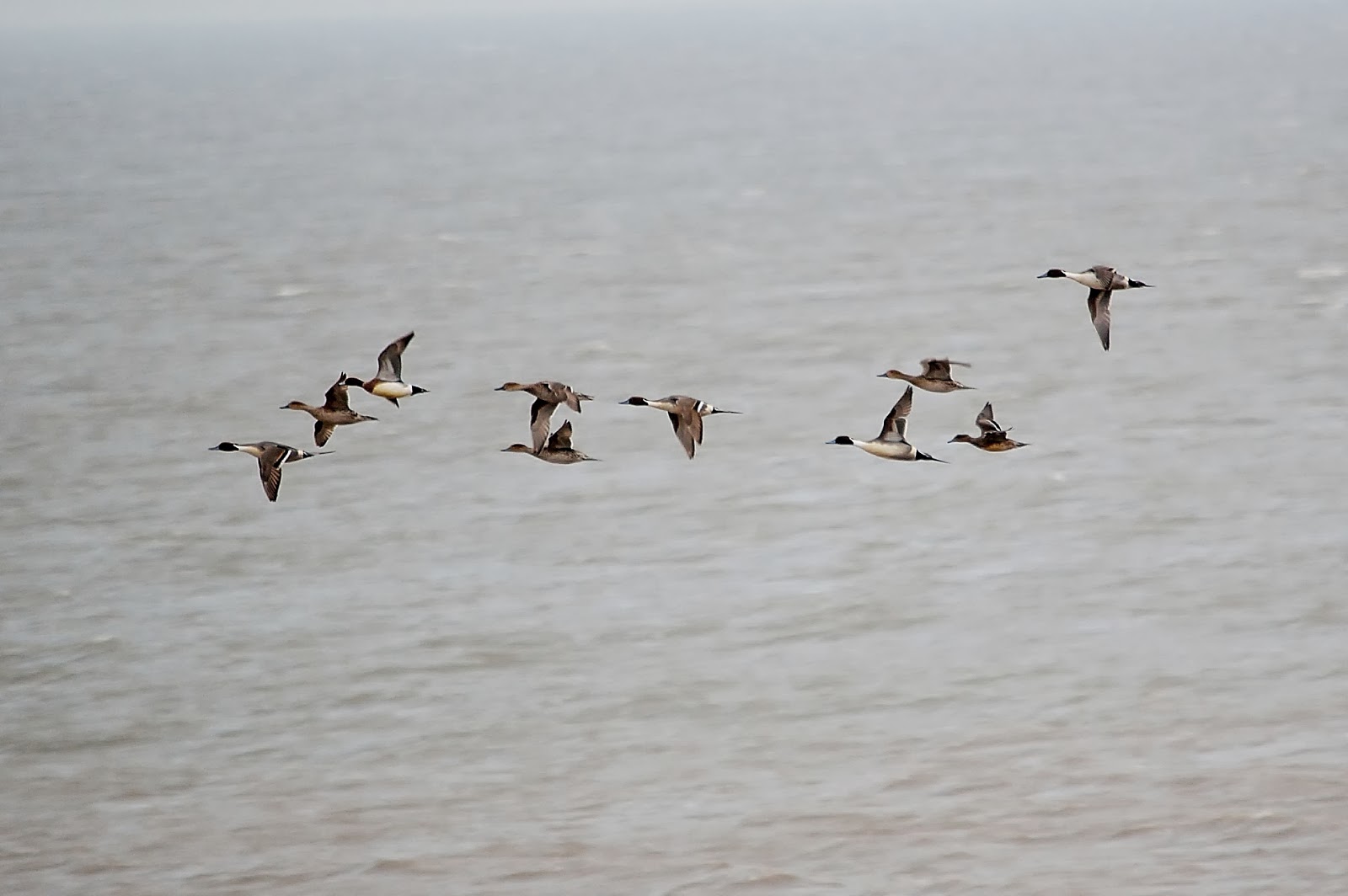 Out at the front of the slipway were Turnstone, Oystercatcher and some more Brent Geese. 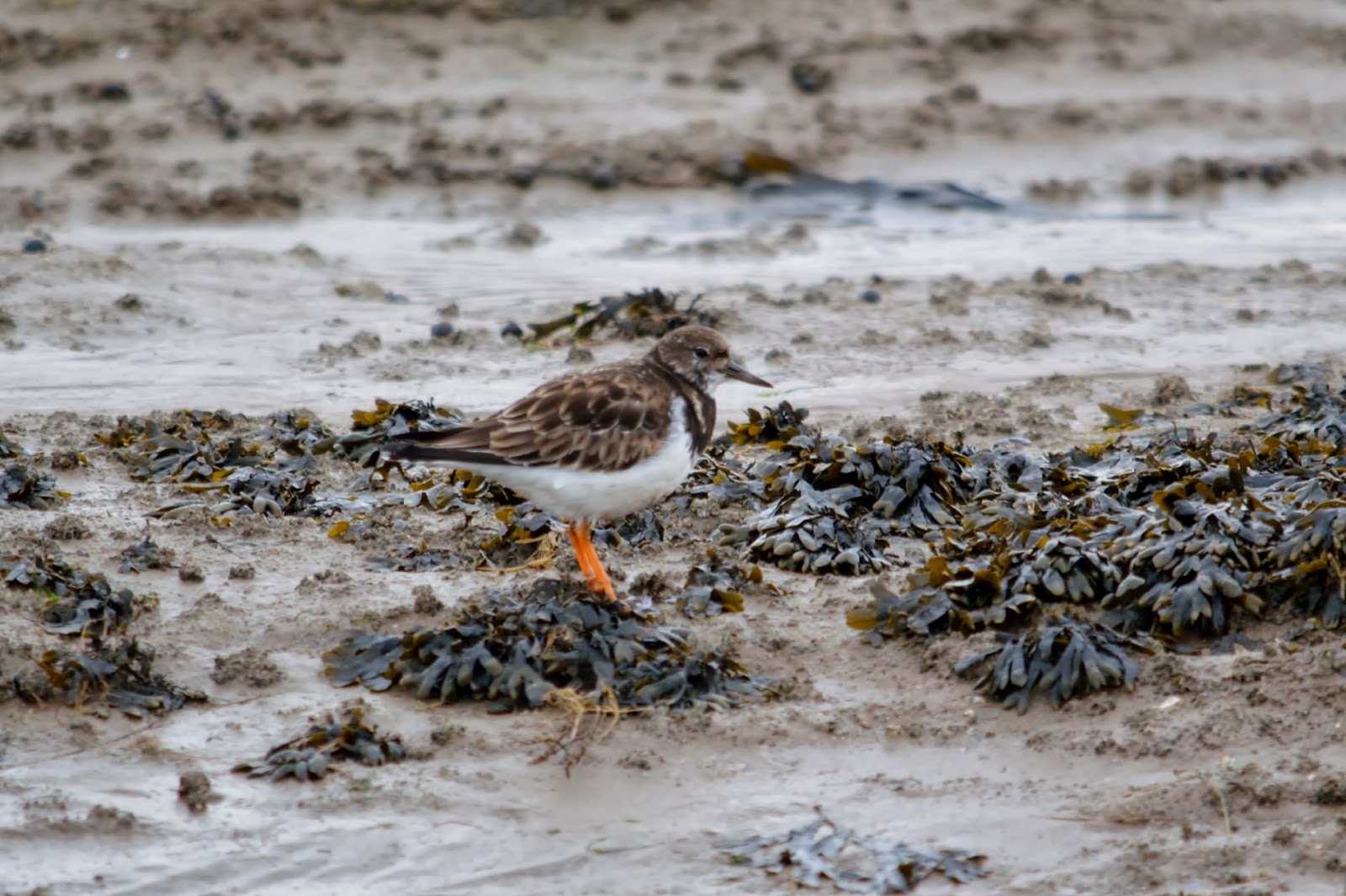 As we scanned the rocks we also spotted about six Knot and a couple of Purple Sandpipers! Always delightful to watch these elegant waders darting by the seaweed covered rocks and delicately picking off small food items. On the Eastern side of the Island on the tideline, we could see Redshank, Dunlin, Curlew, Oystercatcher, Cormorants and some Herring Gulls. We also watched two Lapwings pass over. 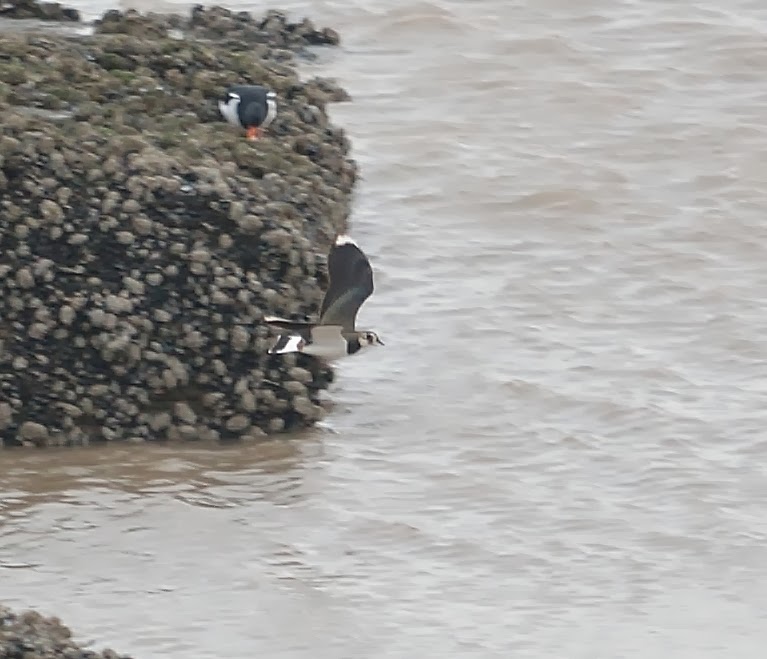 After about an hour watching and with no real movement of auks or sea ducks, Steve Williams came back and showed us a juvenile female Sparrowhawk they had caught and rung. This was no doubt the bird we had flushed from Middle Eye and towards Hilbre. It was lovely to see up close and we noticed the odd heart shaped patterns on the chest. They advised us they had also caught their first Goldcrest of the year. Excellent stuff and a big thanks to the obs guys for showing us the bird.

It was getting to about 11am so time to move on as we planned to go to Burton Mere for an hour. On the way back it was wind in the face time and it was not a pleasant walk back. As we got back to the van my phone beeped and it was one of the apps I have to show distance walked. It showed 11,091 steps and 6.2 miles walked. Definitely easier on the way out than on the way back!!

After stopping in Heswall for a tea and coffee to go, Shaun suggested we take a look at the Gowy Woodland Park, I had not been before so why not. Upon arrival just the other side of Mickle Trafford, the entrance to the park is off Hassall Lane. The park is good for Barn Owls, Mice, Moles, Rabbits and Newts so says the visitor information boards. I was mainly interested in checking over the Gull flocks from the nearby landfill site whilst Shaun was keen to see the Kingfisher on the River Gowy. On the way to spot the gulls, Goldfinches and Chaffinches were flocking together. We also saw large flocks of mainly Fieldfare with smaller numbers of Redwing.

As we arrived by the viewing spot to the fields with masses of gulls, the first fields flock just yielded Black Headed Gulls, but further on looked more promising! 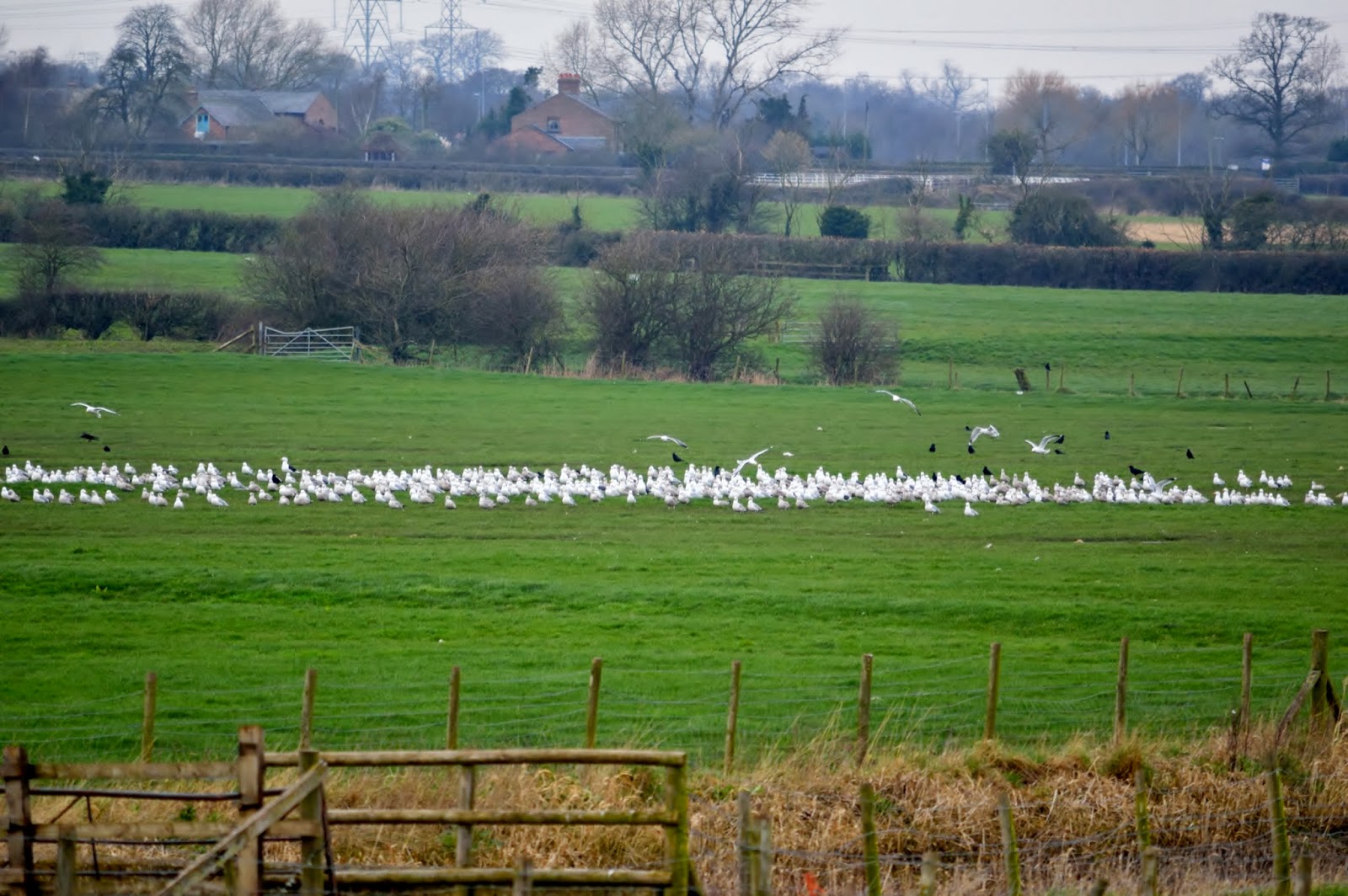 We had barely had chance to scrutinise the Gulls when they took to the air!! 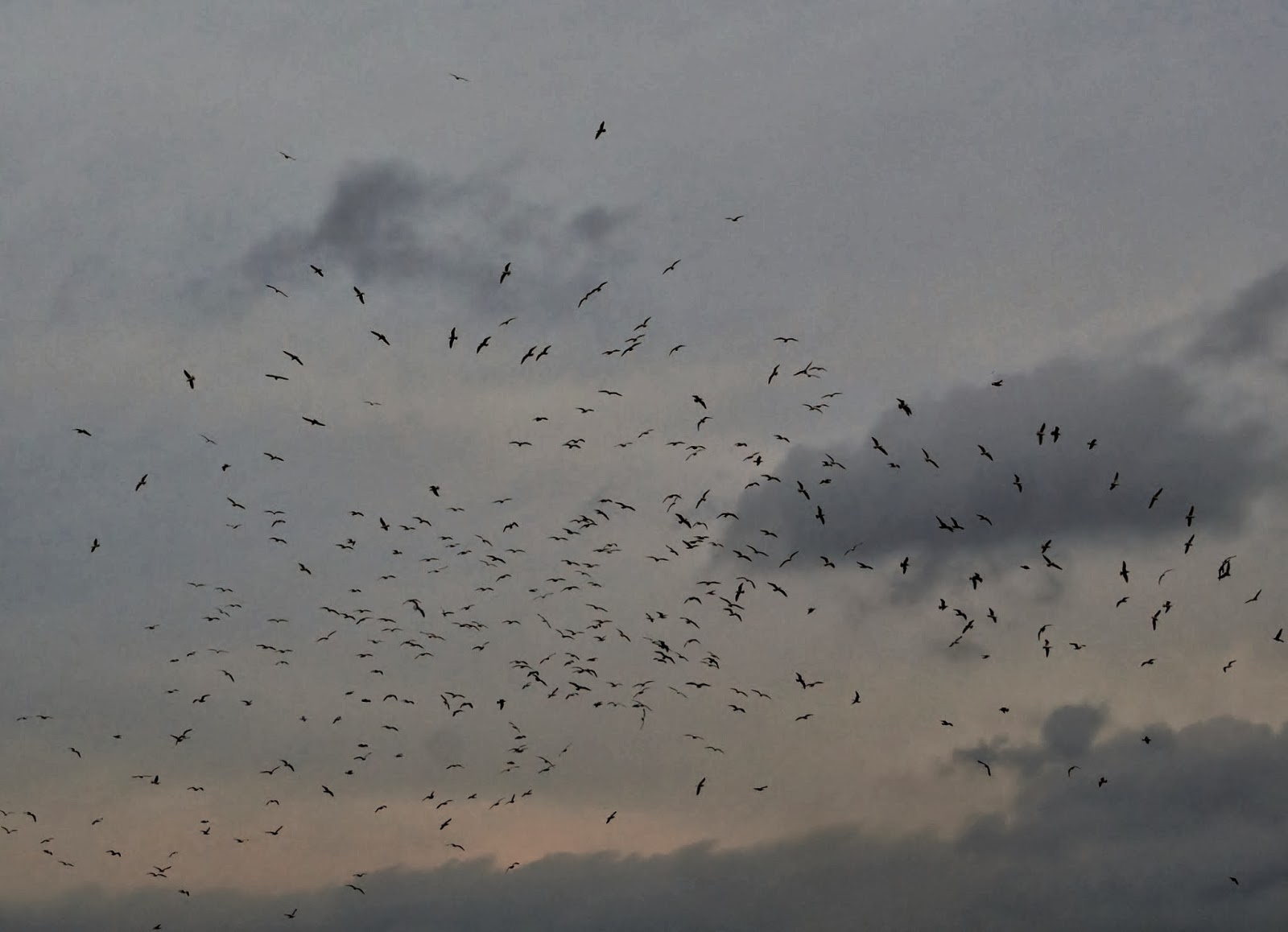 Nightmare, however most of them looked like Herring, Common, Lesser Black Backed and Black Headed Gulls. Problem we had as well before they took off they were in grass fields so the legs were obscured which would have helped with the ID. They were not going to settle so we decided to call it a day as I wanted to get back to watch the FA Cup football on TV. We did have time to observe a pair of Long tailed tits nest building with moss in beaks and flying low down in brambles. Also a bit further on down the track a curious Dunnock was wing flicking and giving us the once over!! 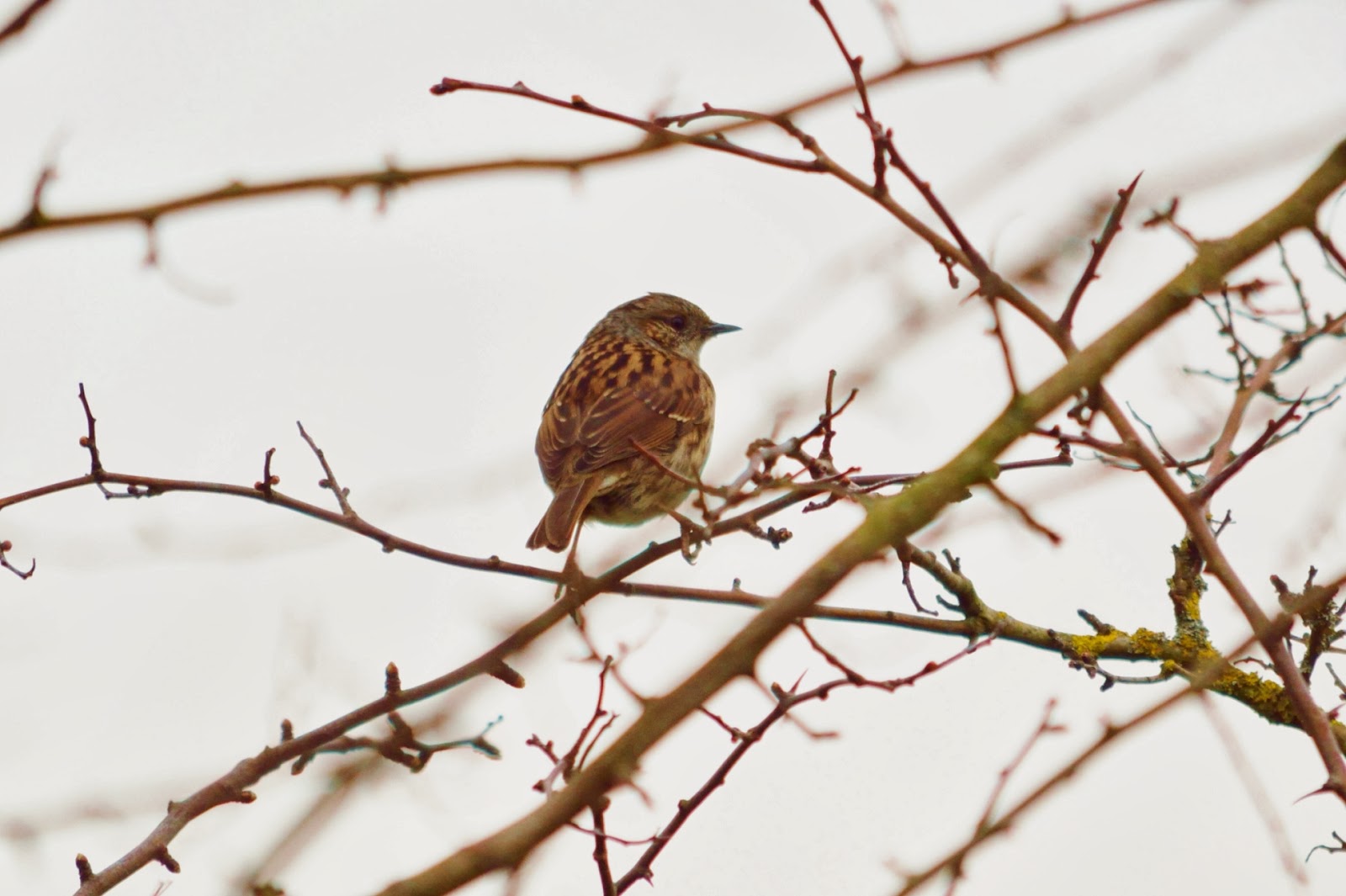 Also on the way back to the van a Buzzard was displaying overhead. 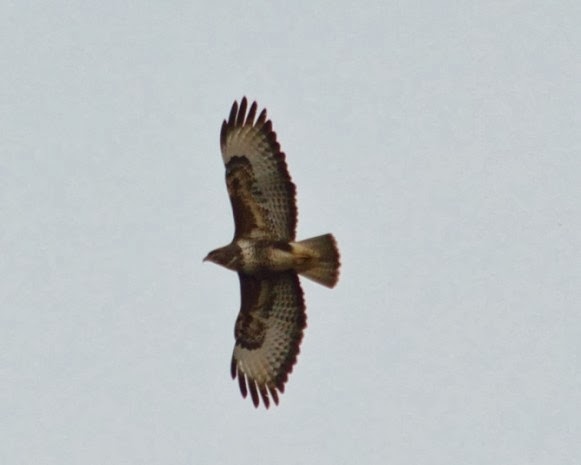 As we were packing up by the van, Shaun spotted a Robin with nesting material in its beak. It was building in an old disused building, yes Spring is here! 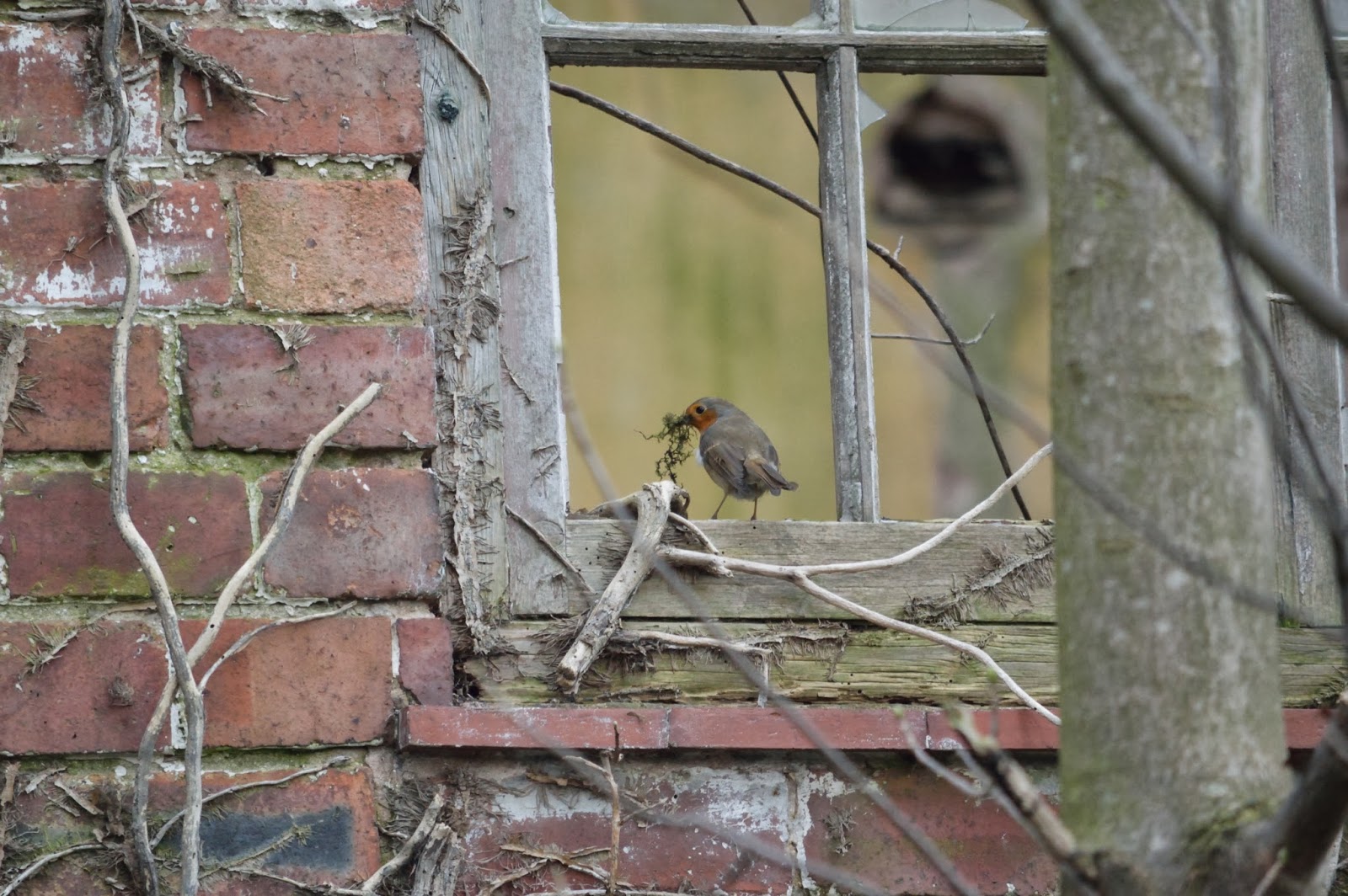 A good mornings birding and its great to know that the first migrants of the Spring will soon be upon us. We do need this High Pressure system and some nice warm weather in the next few weeks to dry the ground up and give the water table a chance to drop down, will be most welcome.

Eyes to the skies!