It was an early start for the 6.20am train to Moreton from Overpool in Ellesmere Port. With Easterly winds prevalent and Wednesday being my free day, I decided to take a look around after missing out on the RB Shrike and yesterdays Hoopoe at New Brighton :(

The first thing that struck me on arrival at Leasowe at 7.15am was the large numbers of Hirundines that were obviously feeding up and getting ready for the off. Here's one on the wires. 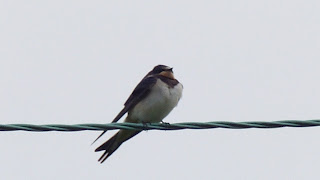 Walking through the scrub towards the lighthouse and past the River Birkett, I heard a sharp call and got a fleeting glimpse of a Kingfisher as it flew into a tree by the river. Not a bad start. Goldfinches seemed to be almost everywhere and the sky was filled with large numbers as they moved in large flocks from place to place feeding on weed seeds. 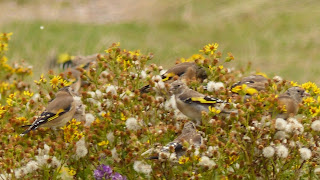 Chiffchaffs were calling in the bushes around Lingham Lane and a string of gulls were having a preen on the telegraph wires. This BH Gull in particular. 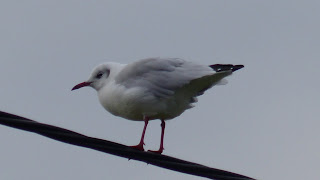 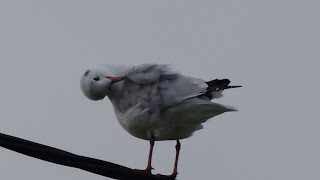 A fox was happily strolling across the horse paddocks and had a roll around and then a good scratch! 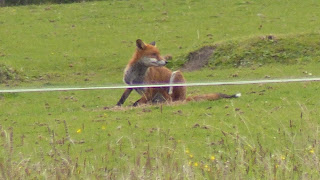 In the adjacent field was a few Magpies and a solitary White Wagtail. 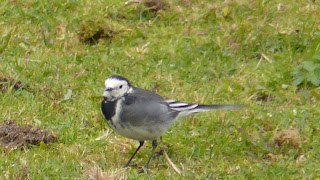 Quick look by Lingham Lane bridge (no Night Heron today ;) but a few tit birds and Goldcrests. Up past the fisheries a solitary Buzzard was perched in a tree and just a few corvids in the fields. I decided to check what was on the seafront and along the coastal paths.

The tide was in and a solitary Redshank fed in the gutter. 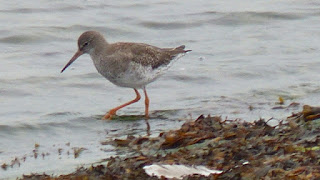 A Sparrowhawk flew fast across the car park and landed in the bushes by the lighthouse.

Back onto the coastal path and in the scrub a 'teck' call alerted me to a couple of male Blackcaps having a set to, maybe new in from a small fall overnight? Too quick for photo opportunity.

Not much else along the path other than a few Blackbirds and a Song Thrush. Up near 'Greenshank' Groyne were three Little Egrets, Redshank, Turnstone & Mr Greenshank :)

The Turnstone was enjoying tossing the seaweed all over the place to root out small flies or insects, fun to watch. 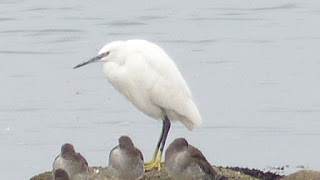 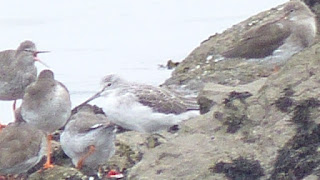 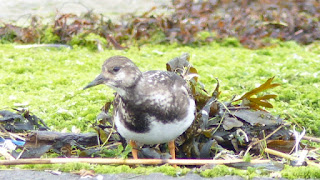 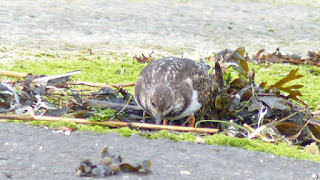 I decided to walk up towards Wirral Beach Caravan Park in the hope of a Whinchat or Wheatear passing through. No such luck, however a Sylvia type warbler caught my attention and it was a Whitethroat. 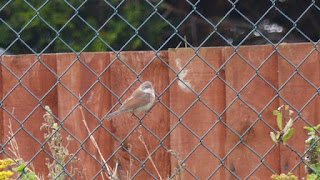 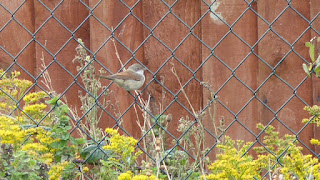 A bit further up a Chiffchaff was behaving oddly so I had to do a double take. The light was very bad this morning so I apologise for the noise in the pics, but it was not easy and at best they are record shots. 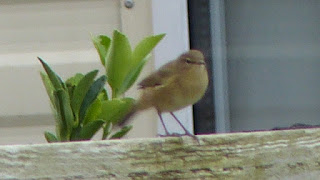 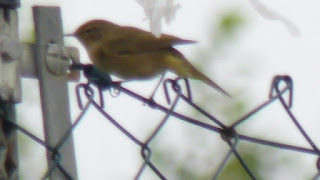 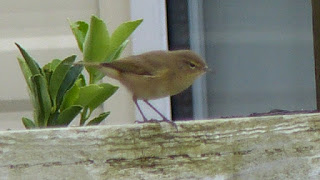 Some lovely wildflowers and poppies graced the overgrown areas around the pony paddocks. 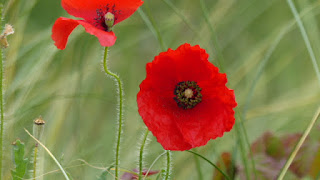 I walked back towards Park Lane and passed a few Mipits feeding alongside the goldfinches. As I got onto Park Lane I had the sense something a bit different may pop up, probably as the RB Shrike was here a few days ago. As I walked along, I came to a junction and the road branches off to the South and has been used for heavy plant machinery access in the past. A bird caught my eye in the Hawthorn bushes. It was a cracking male Redstart about quarter way down. I got the camera and quickly reeled some shots off before it flew further on and out of sight. 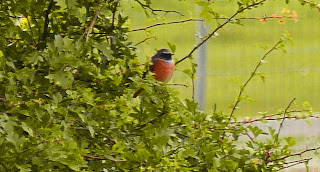 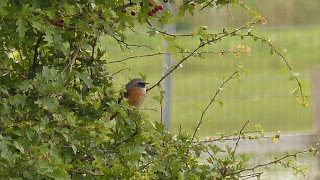 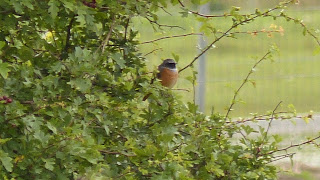 I was chuffed as I don't get to see many Redstarts lately, so well happy.

I walked a bit further up the road and came across at least 7 Mistle Thrushes on fence posts just before a flooded field, obviously some young birds here. Here's a shot of one. Cracking calls they make. 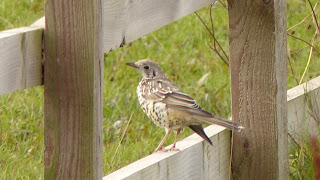 A bit further on a young Grey Heron was after breakfast stealthily moving along the pool with anticipation. 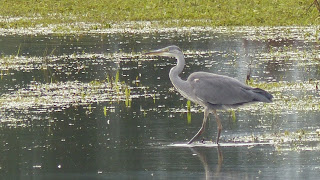 I decided to walk back along the horse paddocks towards Lingham Lane. The sun had started to make an appearance after the cloudy start and with it a few butterflies started to appear. This Speckled Wood was one of many today. 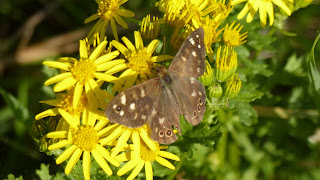 The Horses as always are quite inquisitive but are no bother. 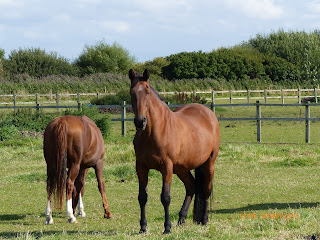 Some young Wagtails & Linnets were active in the horse paddocks. 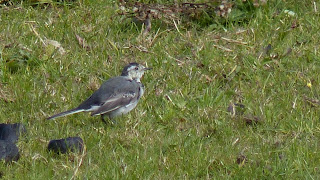 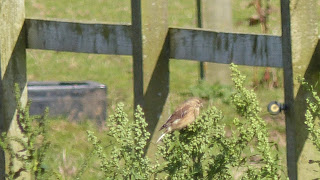 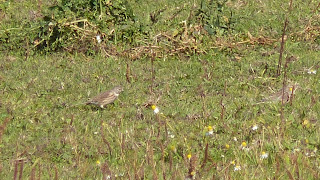 Just then a small jet went racing over the paddocks, I think it is used for training purposes and is out of RAF Valley in Anglesey? I may be wrong. 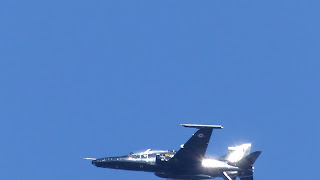 Around the reed beds I heard a subdued Reed Warbler and saw a female Blackcap as well as hearing a few more chiffys. Further on and a quick look out to shore showed the tide was on the way out and the feeding frenzy had begun with gulls, Oystercatchers and Curlew all tucking in. 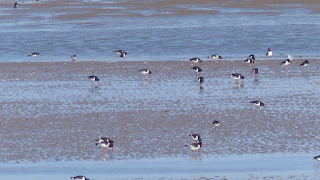 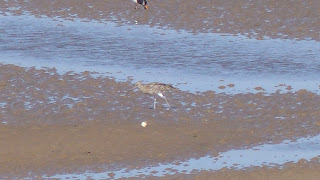 On the way home I had another quick look around Lingham Lane and bumped into local birders Allan Conlin & Eddie Williams. They said they had seen a couple of Redstarts as well, so with the Easterlys around until at least Saturday, bodes well for the end of the week :)

A Kestrel was hunting in the fields at the back of the fruit orchard and I was startled by a Stoat that ran right past me under the metal gate by Lingham Lane bridge.

A thoroughly entertaining mornings birding and as always I love the Wirral coast & Leasowe Lighthouse.