I arrived at Barcelona airport on Wednesday 20th May 2015, it was a 2 hour coach trip to my base in Lloret De Mar and I was looking forward to going birding with Dani Valverde a local guide from Girona who was to take me to see some great birds on Friday. 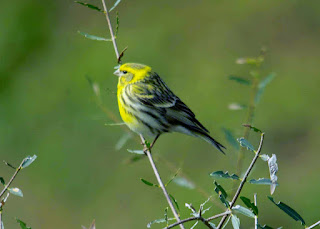 and also a very vocal Cetti's Warbler. Overhead were a few cracking Alpine Swifts in amongst the Swallows, House Martins, & Pallid Swifts. If I walked out near to the beach the scrub and gorse was full of Sardinian Warblers :) 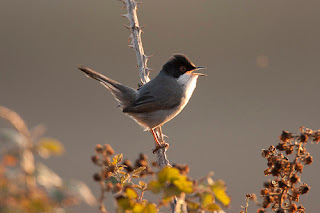 Dani turned up at my apartments on the Friday morning nice and early at 6am and we set off towards Cap De Creus which would be over an hours drive. As usual when birding by car you try to spot stuff along the way and it was not long before Dani spotted a bird of prey sitting in a field. Upon looking it was a Red Footed Falcon, scanning the fields there were several maybe grounded by the high winds we had today. 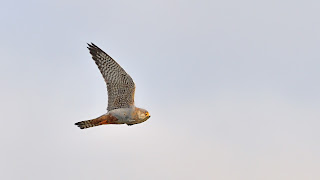 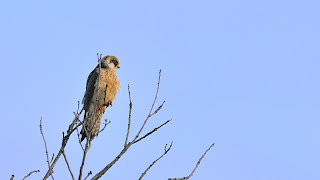 The drive up to Cap De Creus is very steep as you go up into the mountains. Dani wanted to show me a pair of Eagle Owls nesting at a nearby quarry, we could not see the adults, however two chicks were near the nest. 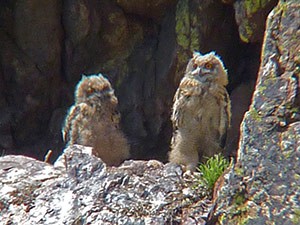 Wow, what a start!! Further on up the quarry we spotted a deer and I also spotted a Blue Rock Thrush. 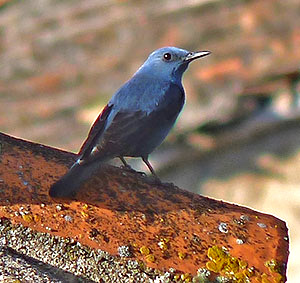 At the top of the mountain, the wind was blowing very strongly, before exiting the car Dani spotted a Tawny Pipit. Our objective here was Ortolan Bunting and Spectacled Warbler. 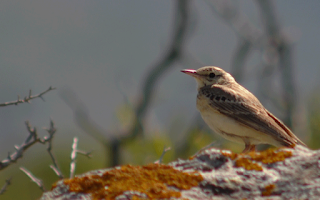 Despite the wind we picked up the call of the Ortolan Bunting and sure enough a singing male gave us great views. Short video as well of Dani's earlier visits. 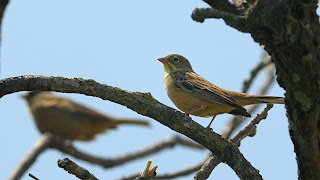 Further on in the scrub was a stunning male Black-Eared Wheatear and also a Spectacled Warbler!! I was on cloud 9 at this stage with stunning birds and new species seemingly everytime I looked through my bins :-) 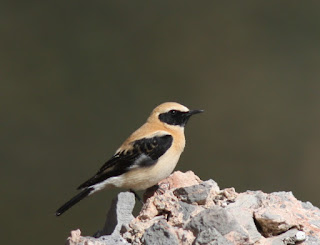 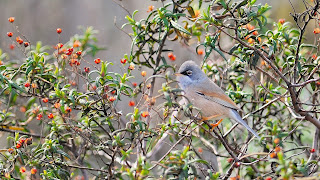 We had a good hour or so exploring this area and a short drive further on I saw a stunning Rufous tailed Rock Thrush, we also had a Red Backed Shrike, but this disappeared from view quite quickly. 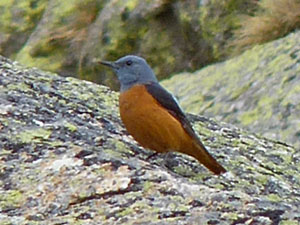 We drove back down the mountain and further on to see if we could see some Bonelli's Eagles. We passed a large military base with Radar which stands out when you visit Cap De Creus. 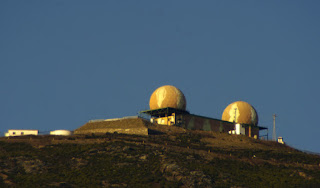 We stopped to look for Bonelli's but sadly none were to be seen, however I spotted several Honey Buzzards overhead on migration. As we went further back up the mountain towards the Monastery, the several turned into hundreds of birds that had been forced low by the high winds. 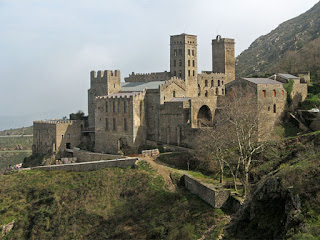 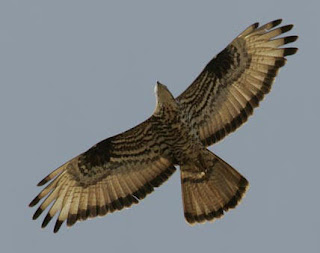 The monastery is truly beautiful and our walk up the road towards it produced Corn Buntings, Greenfinch, Western Orphean Warbler and a very vocal Melodious Warbler.....Wow!! 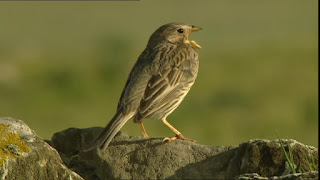 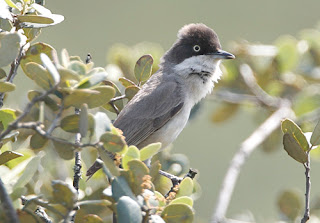 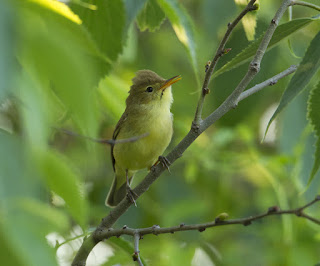 Glad I brushed up on my birdsounds ID before I came out here as the Orphean was being quite elusive. Sadly a target bird of Rock Bunting was not found here today, but I was not complaining ;)

It was getting quite hot now so we drove towards Emporda Marshes and on the way saw Roller on telegraph wires and in some old dead trees. Also a Woodchat Shrike flew out of some olive groves and right in front of the car. 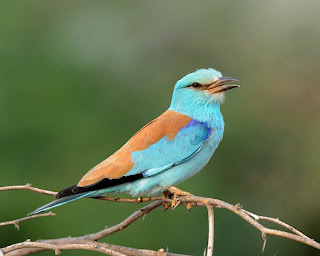 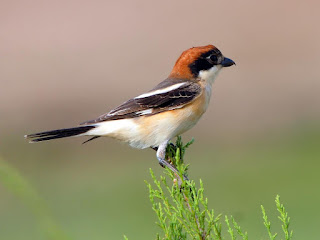 We stopped off for lunch and had a cracking three course meal of pasta and meat balls (starter - like a main meal in itself) Chicken & Chips and Ice Cream, along with a bottle of the local white wine which was like nectar.

After a relaxing but copious lunch, Dani took me to an area where we may see breeding Montys. We looked for a while but could not see them, however we did see Crested Lark, Short Toed Lark and a stunning Short Toed Eagle which was circling overhead!! 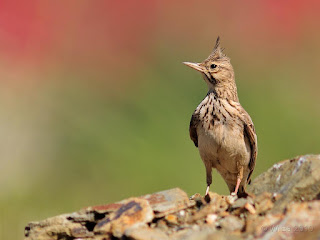 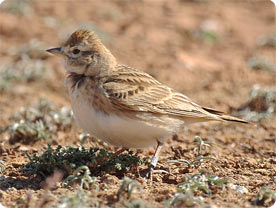 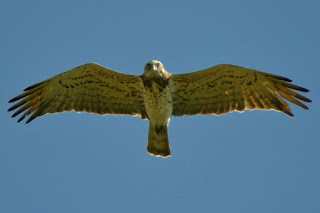 Some locals were spraying crops and also a farmer was cutting a field nearby which had another Red Footed Falcon sitting in it!! Back in the car an half an hour or so we got to some flooded rice fields that held Lapwing, Black Headed Gulls, Wood Sandpiper, Little Stint & Some Black Winged Stilts. 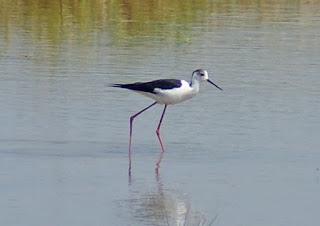 The reserve at Emporda Marshes had a Hoopoe in the car park and a singing Nightingale right at the gate entrance! 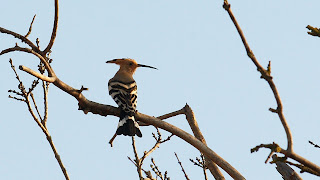 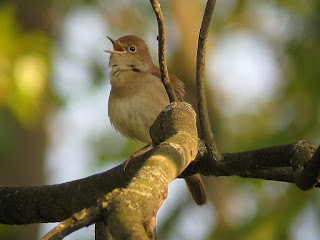 Inside one of the hides it was fairly quiet with just a Moorhen and Mallard on a small lagoon and a Marsh Harrier flying around the reed beds. Blackcap could be heard and also Zitting Cisticola. On the way out we stopped to look at a colony of Bee Eaters. Stunner.

We drove out and further around the marshes to a good viewpoint and saw Yellow Wagtails, Glossy Ibis, Purple Heron, Squacco Heron, Little Egret, Wood Sandpiper, White Stork and other small waders. 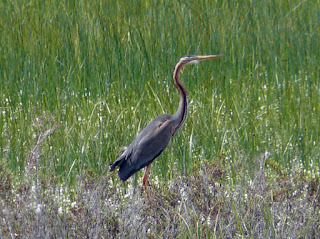 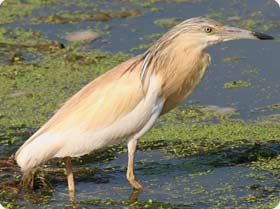 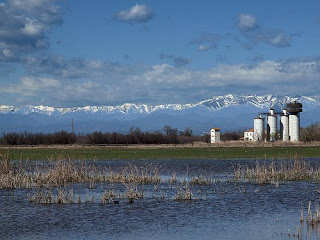 All in all a stunning days birding with Dani and I arrived back at the apartment at about 6pm so a full and tiring day. Dani is on twitter @acrocephalus and can be contacted if anyone is interested in having a birding trip in Catalonia. I can recommend this and hope to go again soon. See link :-

Images by Dani Valverde
Also some library pics
Posted by bucko41 at 17:51