After a relatively quiet Summer in which my year-list had dried up, I had planned to visit Spurn for my annual migrant fix :)

My Brother in Law Gary picked me up at 4am for an early drive to Kilnsea. After safely negotiating the M56, M62, A63, A1033 & B1445 we arrived at Kilnsea just after 7am. We checked in at Westmere Farm and then drove down to the BlueBell Cafe car park area and immediately I spotted some juv Whinchat on a barbed wire fence. 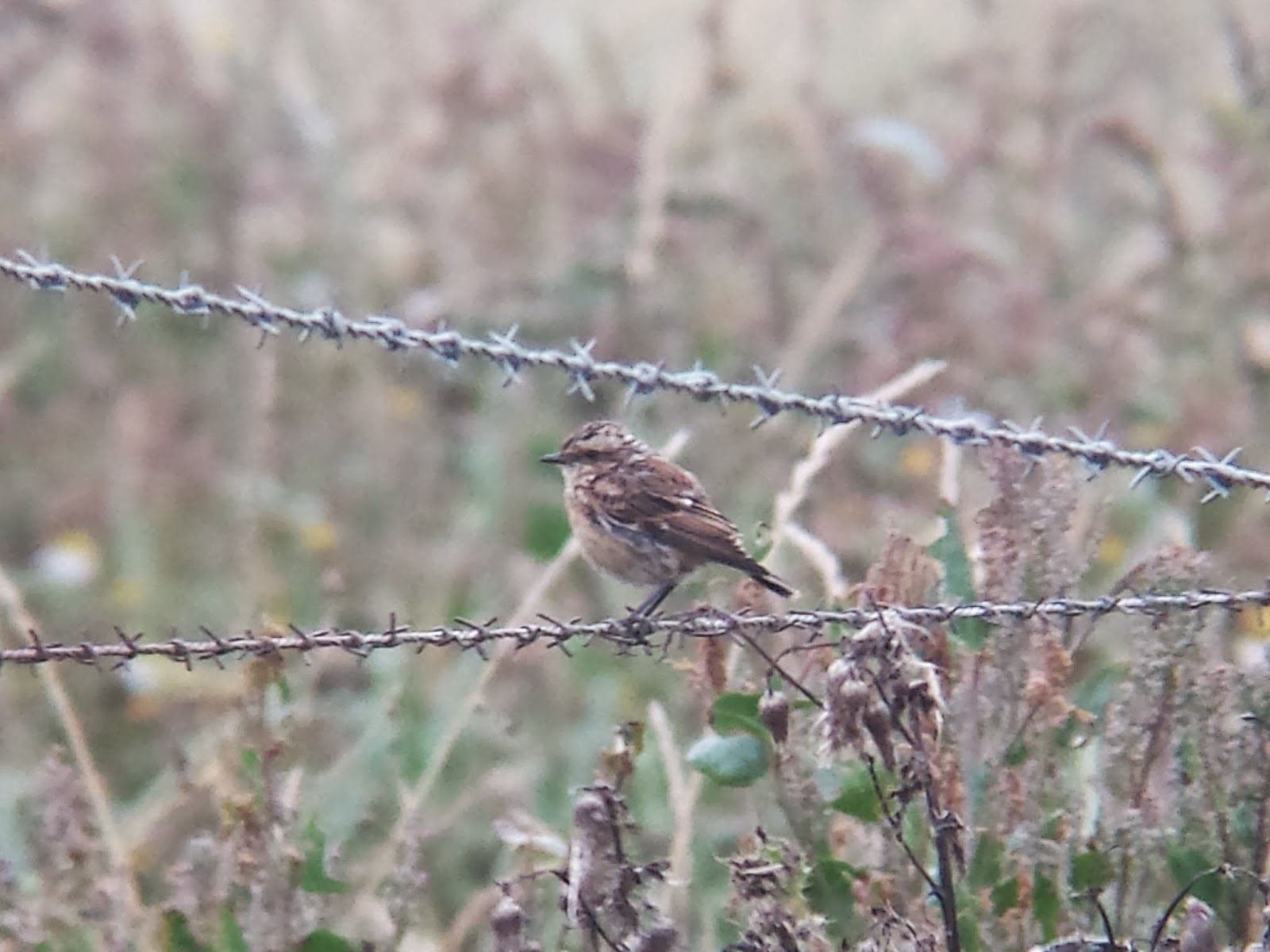 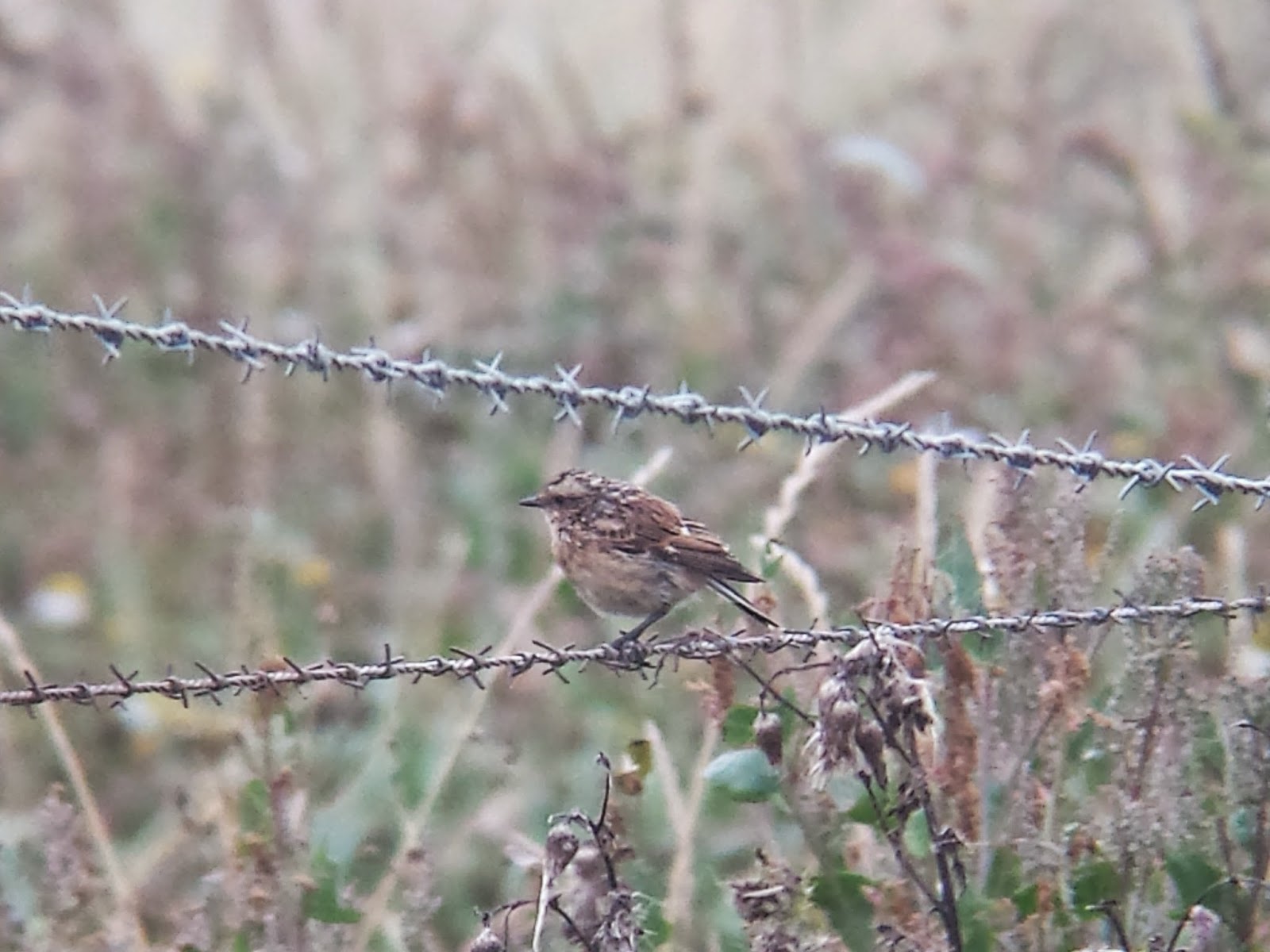 A bit further along in the scrub were some Stonechat and in the pools were a couple of Redshank. Lots of House Martins, Sand Martins & Swallows were flying over the pools looking for breakfast :) We got all our gear sorted and set off around the corner to walk up past Southfield Farm and towards the Canal Zone. All of a sudden I noticed movement in the hedge near the farm entrance and it was a Spotted Flycatcher. Myself and Gary watched this showy bird for sometime :) 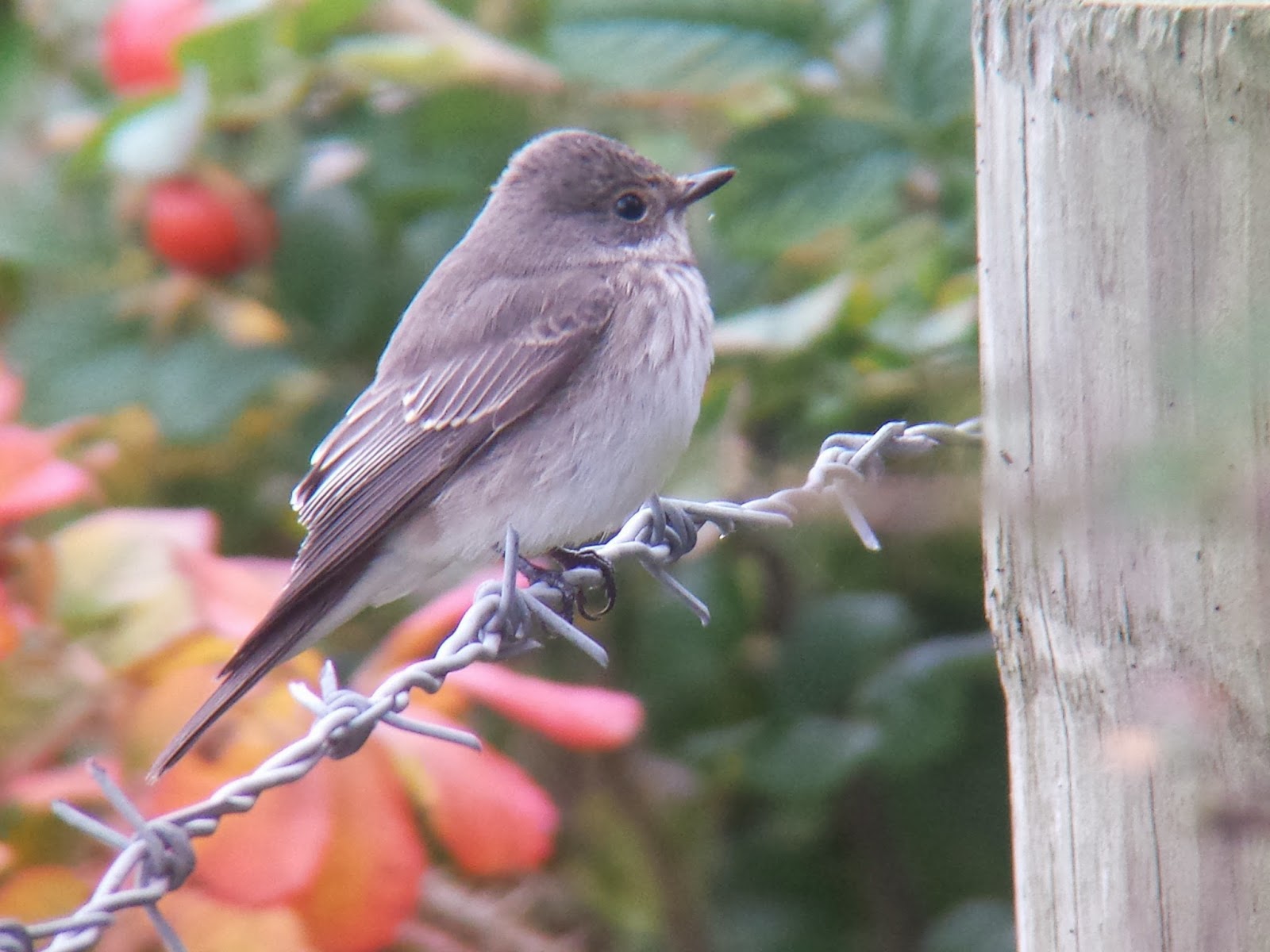 With Easterly winds prevalent during the last week and a low front moving in, it boded well for todays birding and we were not to be disappointed!! In the next field we could see a lot more Whinchat on fenceposts and also a lot of Yellow Wagtails feeding in the grass.

We had a look around the Canal Scrape and saw a couple of Coot and a Snipe, outside another Spotted Flycatcher was on the telegraph wires. We walked up towards The Warren and to look at any vismig out to sea. The mist was quite thick further out to sea so not much had been seen, however at 'Numpties' watchpoint we were looking at mass migration of Meadow Pipits and flock after flock of bird flying overhead. Ian Smith (chairman at Spurn) was telling me that up to 1500 mipits had passed through from their Iceland breeding grounds that morning already, with many more to come!! We decided to take the footpath back alongside the canal towards Cliff Farm. Along the path we saw Willow Warbers, Whitethroat and Reed Buntings. Nearing Cliff Farm we saw some birders looking into a tree and then a small bird flew towards us and swung around and landed in some tall bushes. It was a Wryneck!! Brilliant, it had been ages since I'd seen this special bird and I quickly set up to get some phonescoped record shots, little did I know that the bird would soon fly down onto the nearby rocks and give me a cracking photo opportunity :) 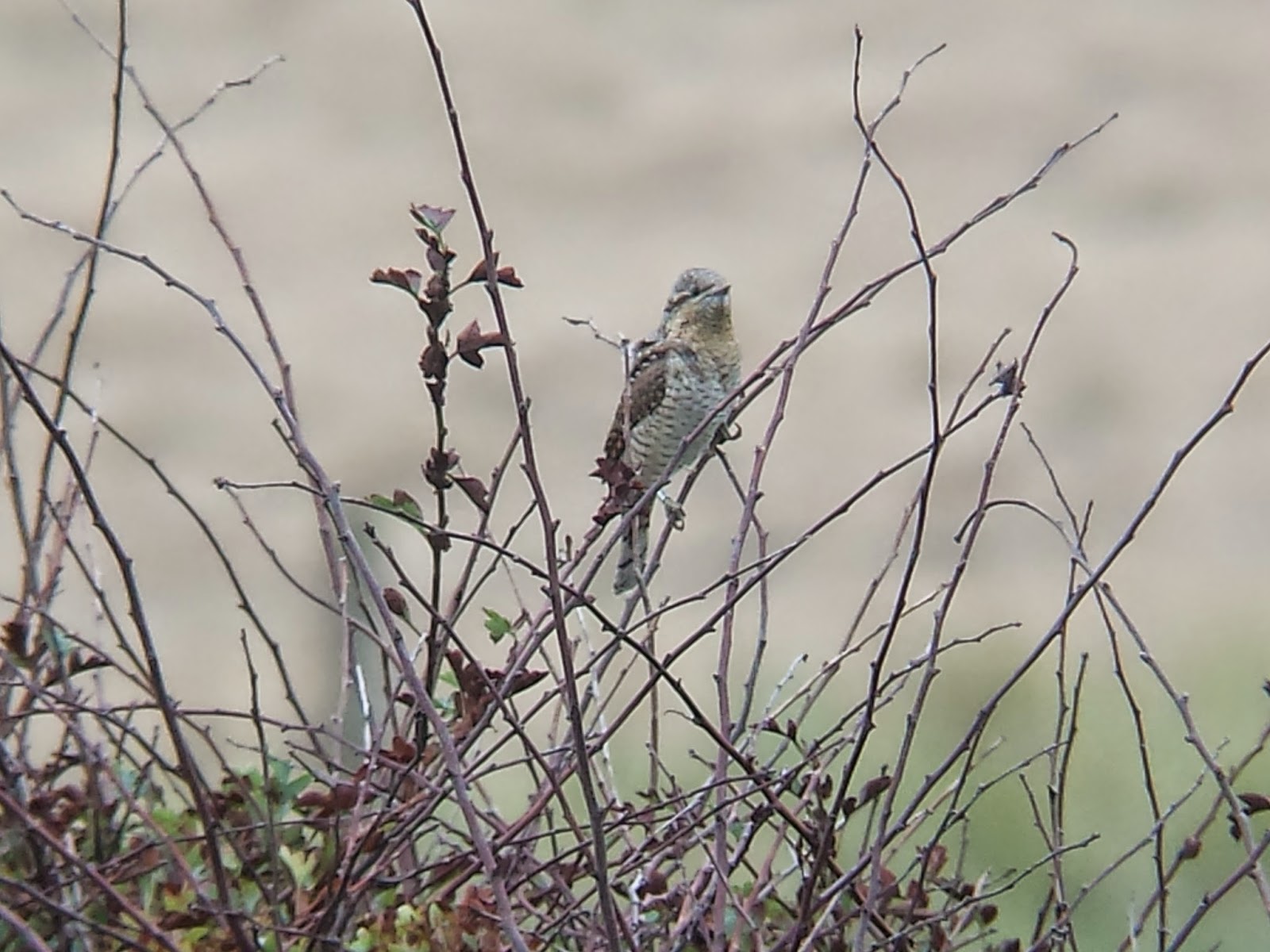 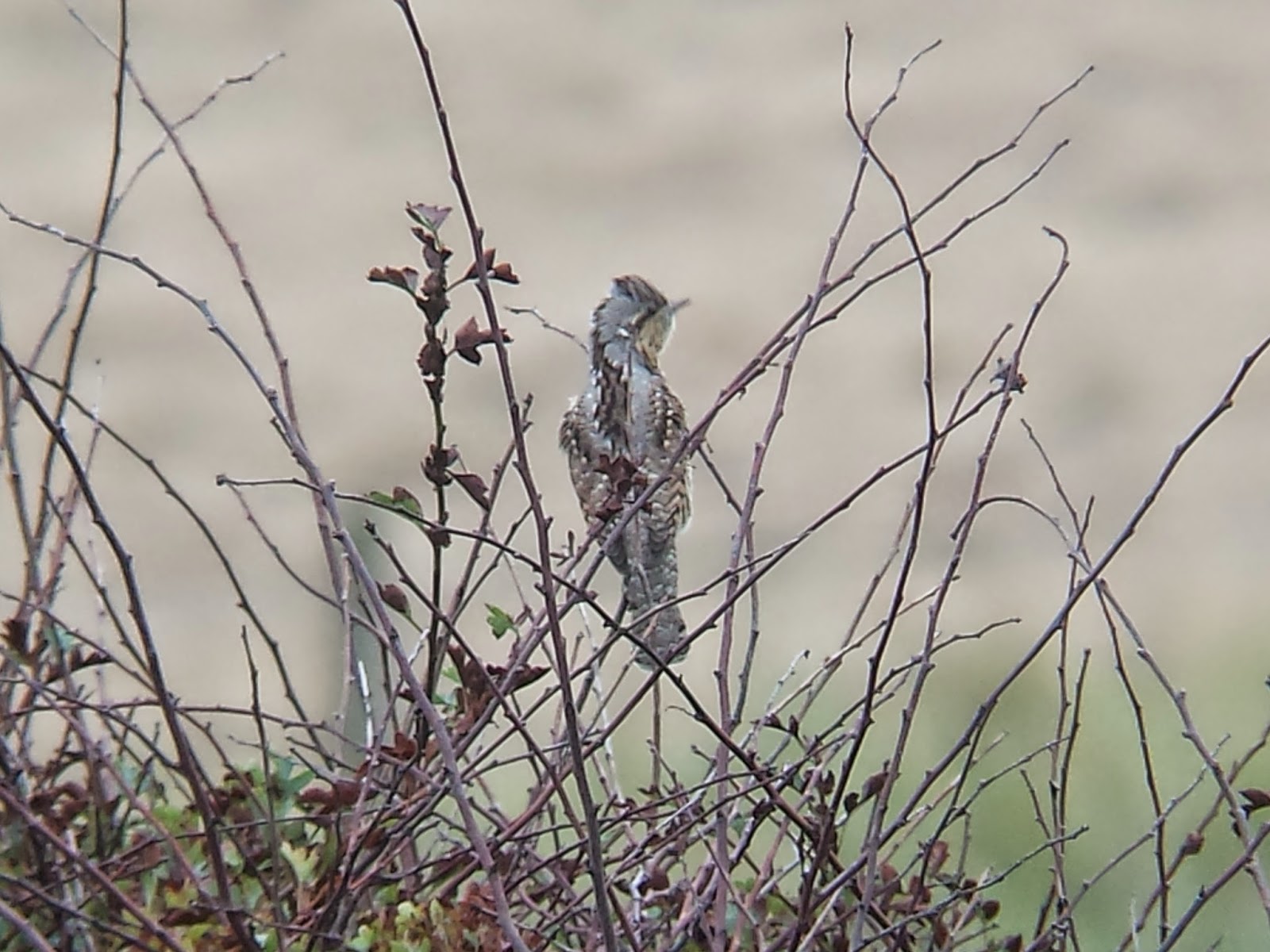 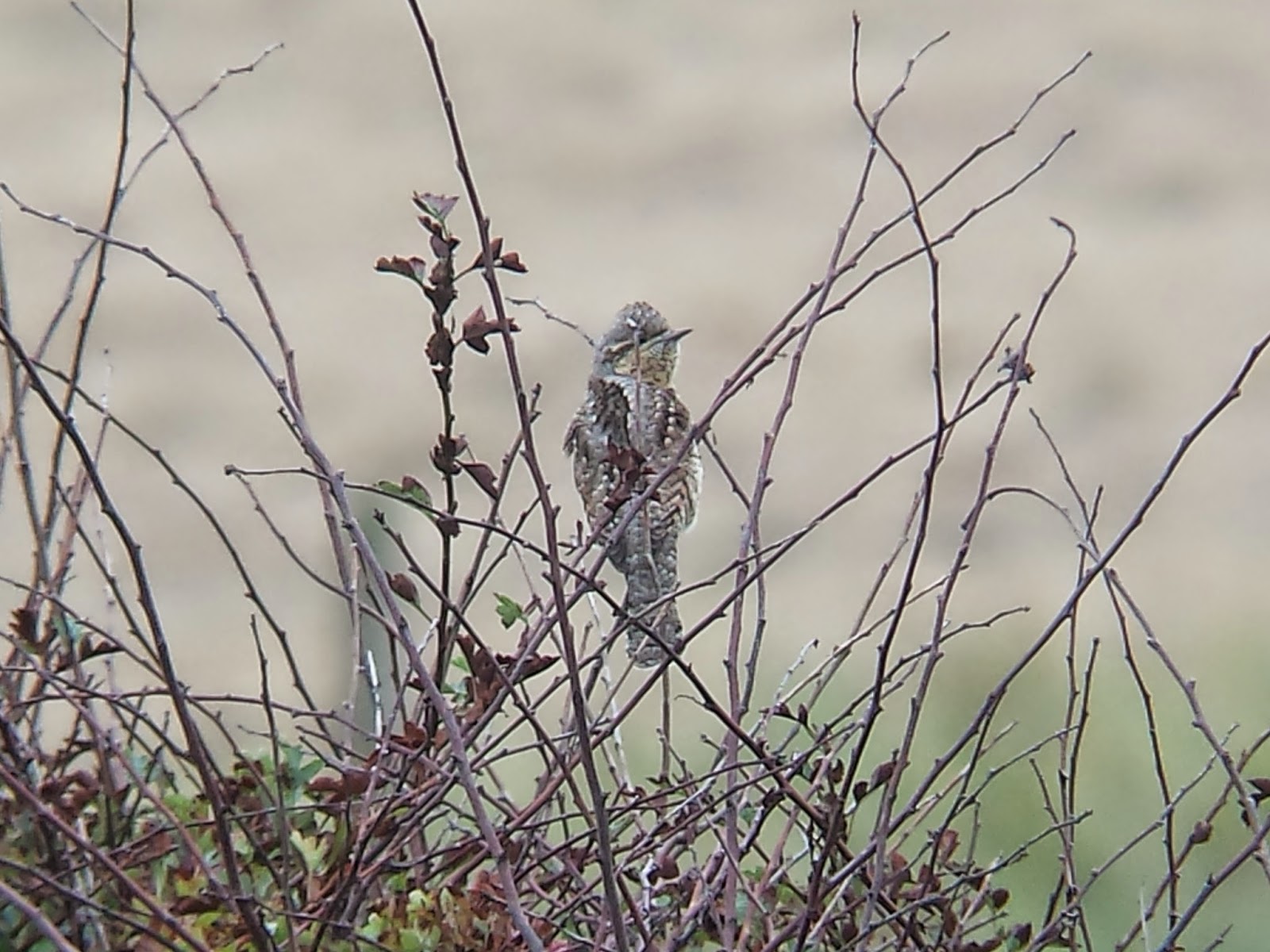 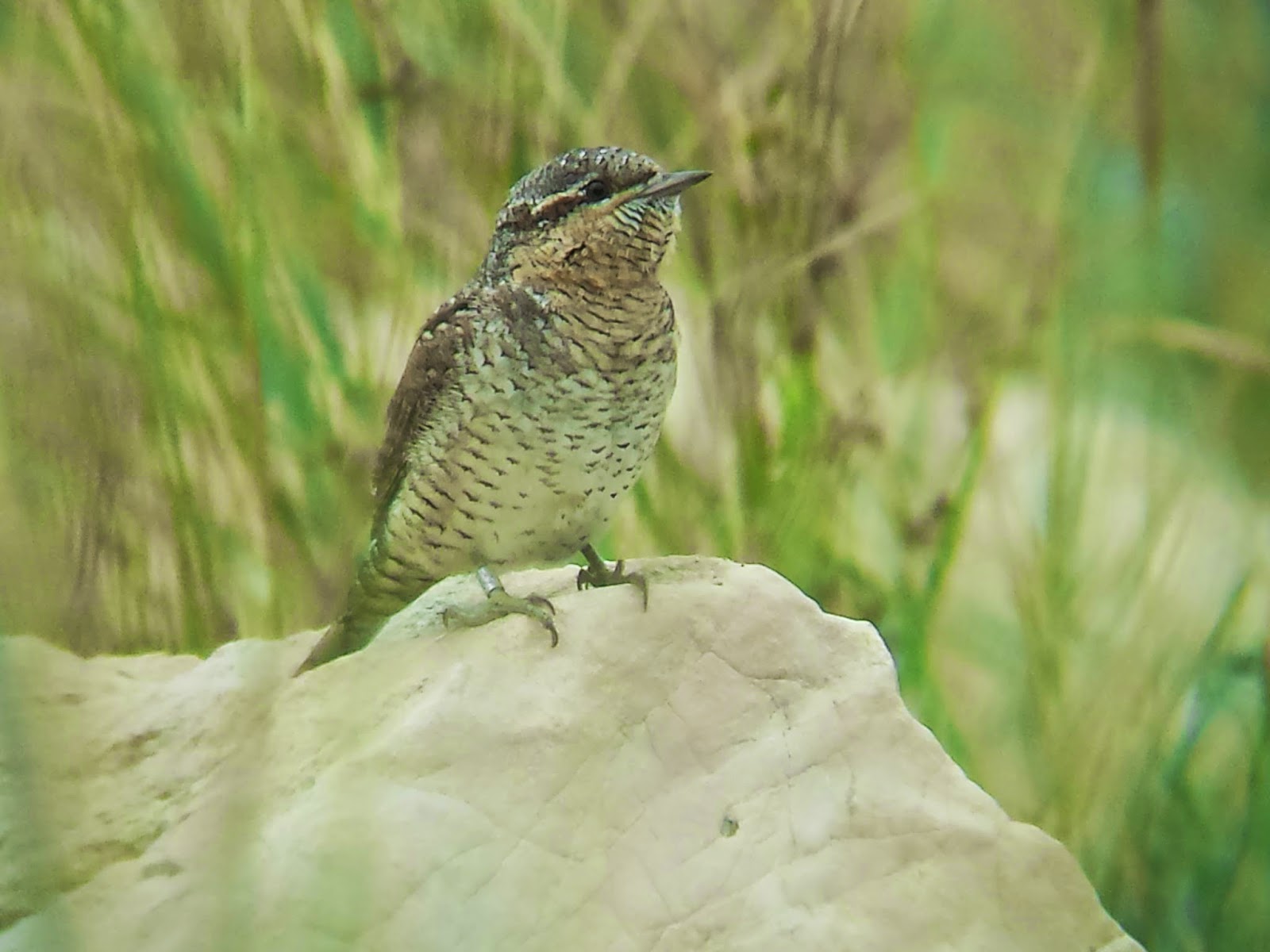 As you can see this is probably a bird that was recently ringed at the spurn bird obs a day or so ago and has hung around to fatten up before making its onward journey South along the coast. Feeling pleased as punch, we walked up towards Cliff Farm and out onto the path by the Crown & Anchor Pub. In the car park at the back I could see a few birds moving and we noticed a couple of Pied Flycatchers in the trees. 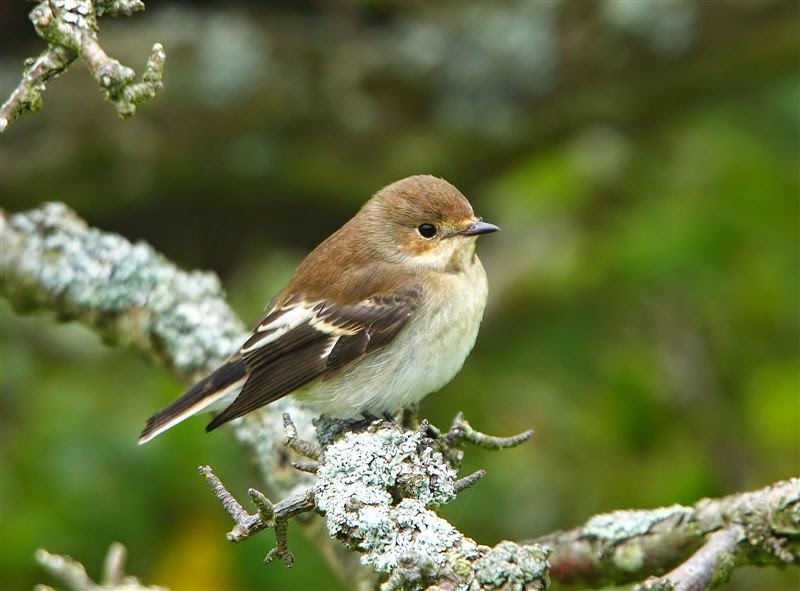 Just then Martin Garner (@birdingfrontier & Spurn Committee) asked what we had spotted and also enjoyed these fine migrants, he then radioed through to advise the location. (Throughout the day any sightings were relayed by two way radio for those who had hired them) Time was ticking on and we were feeling peckish so we headed back to the car for an early lunch around 11.30am. As Gary was brewing up, I spotted a Wheatear fresh in off the sea and took these snaps. 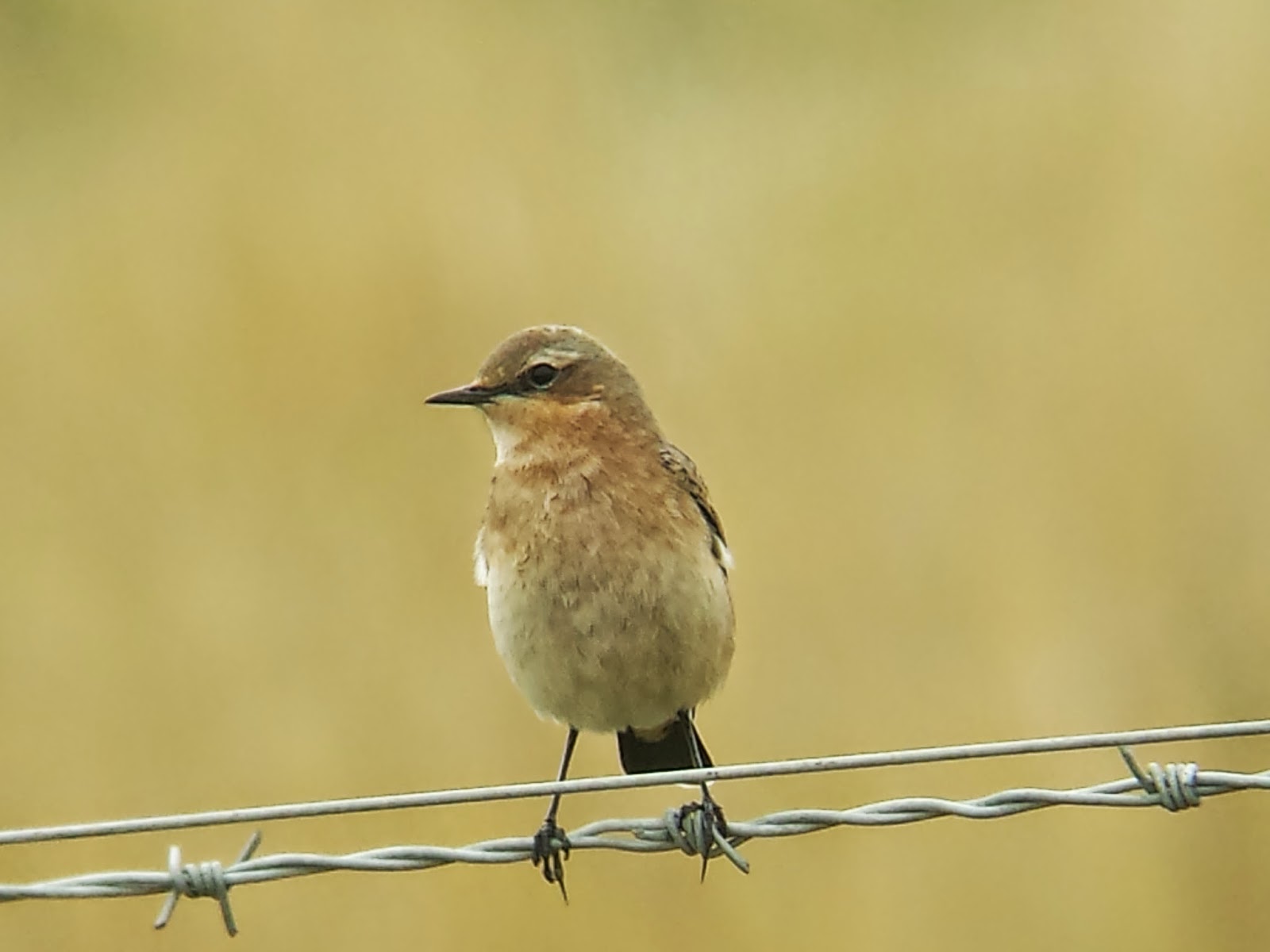 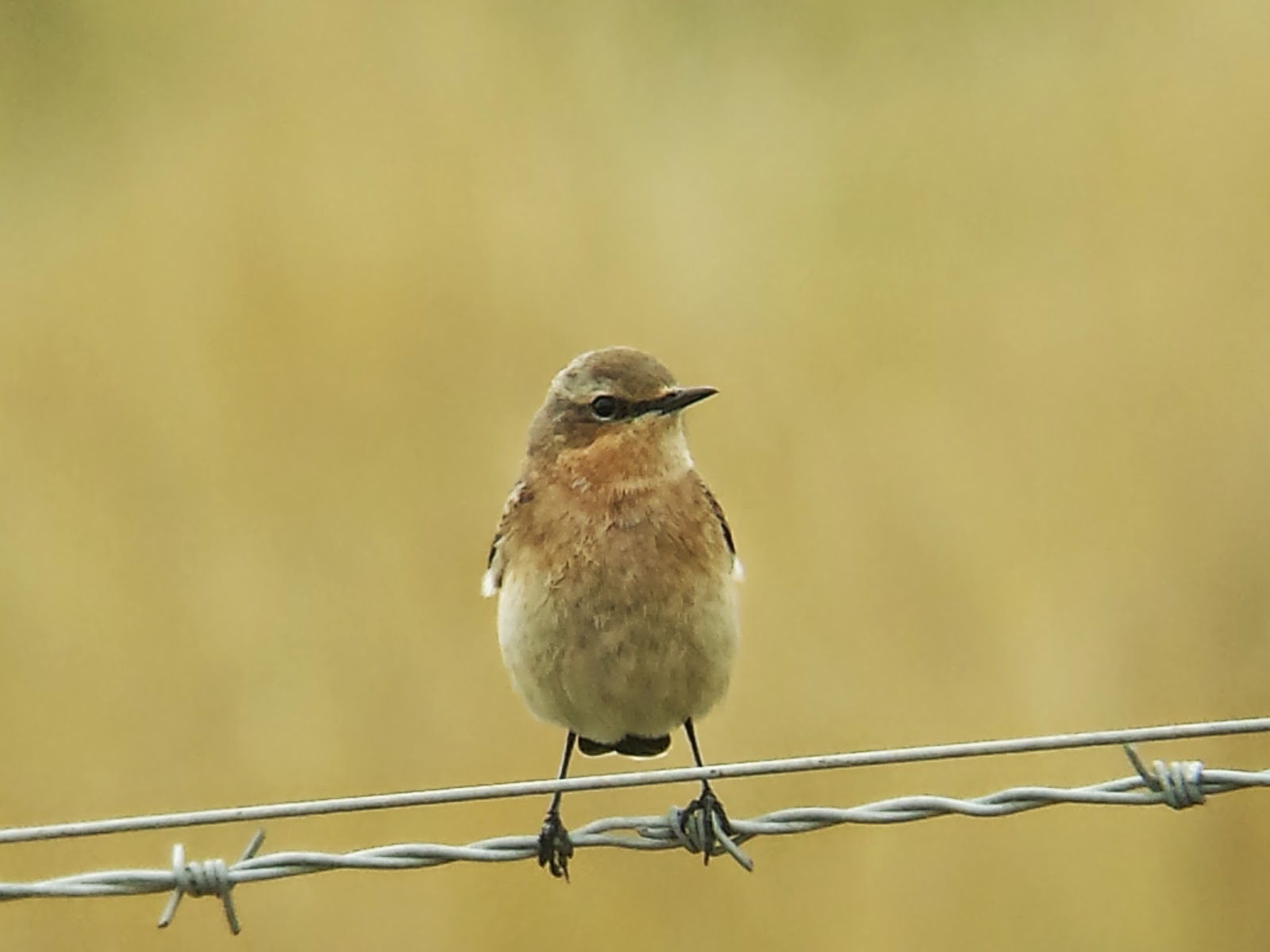 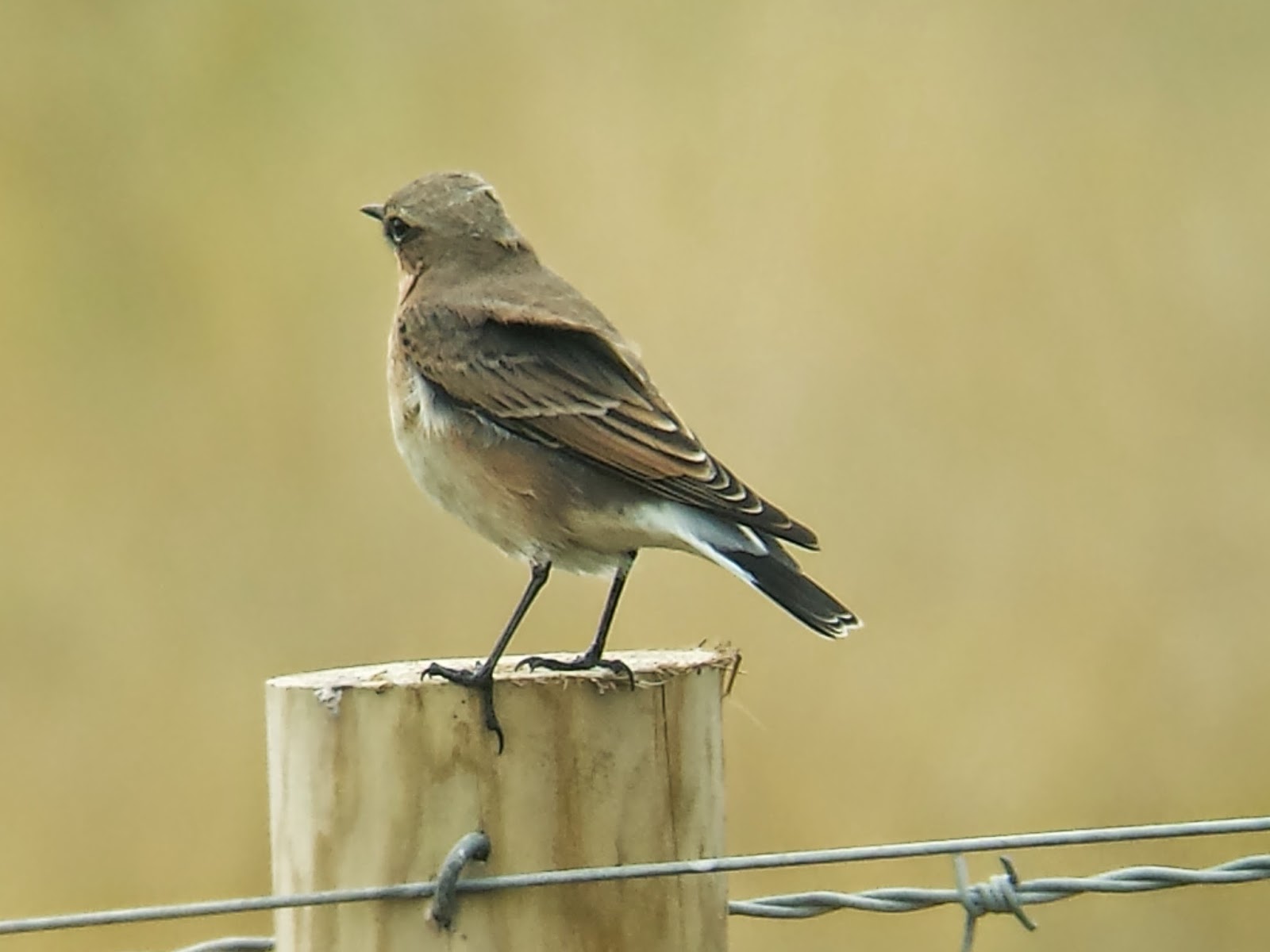 After lunch we looked in at Southfield Farm again and could see a couple of Spotted and at least one Pied Flycatcher on the garden fence! This is the same place that last year we had a Red Backed Shrike and a Barred Warbler sat side by side (see my blog from September 14th 2013) moving into the next field I spotted a small ditch in which a Redshank, Ruff and a Snipe were feeding. As I was watching these birds I caught movement out of the corner of my eye and on the top of a hastily erected looking screen hide/wicker fence was sat another Wryneck looking at me!!! It was unreal!! Our Gary was gobsmacked, but it did not hang about long and was soon off back over the field. Just then news came in that a Barred Warbler had been trapped at Church Fields (ringing station), we set off and 5 minutes later was looking at a Barred Warbler close up in the hand, I mean how good does this get? 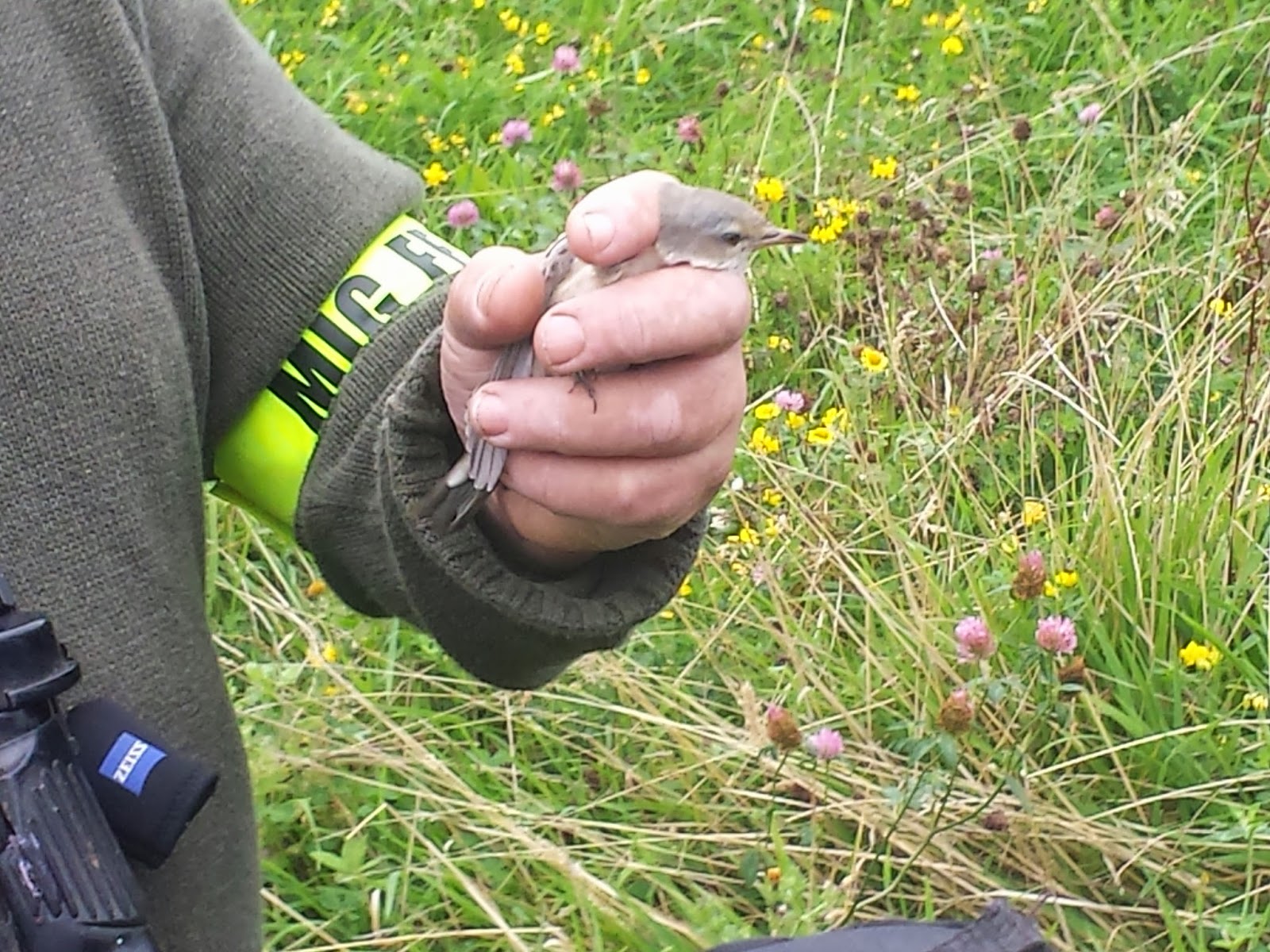 We decided to walk back up the coastal path back towards The Warren as you can see birds along the path and in the fields and also any birds in the Humber Estuary. I was scanning the Estuary and could see Redshank, Golden Plover, Ringed Plover, Curlew, Turnstone, Dunlin and also some fine Curlew Sandpiper. I took these record shots and you can see they have that nice decurved bill and clean white underbelly and a peachy wash around the throat. Also see more longer necked than Dunlin and slightly larger. 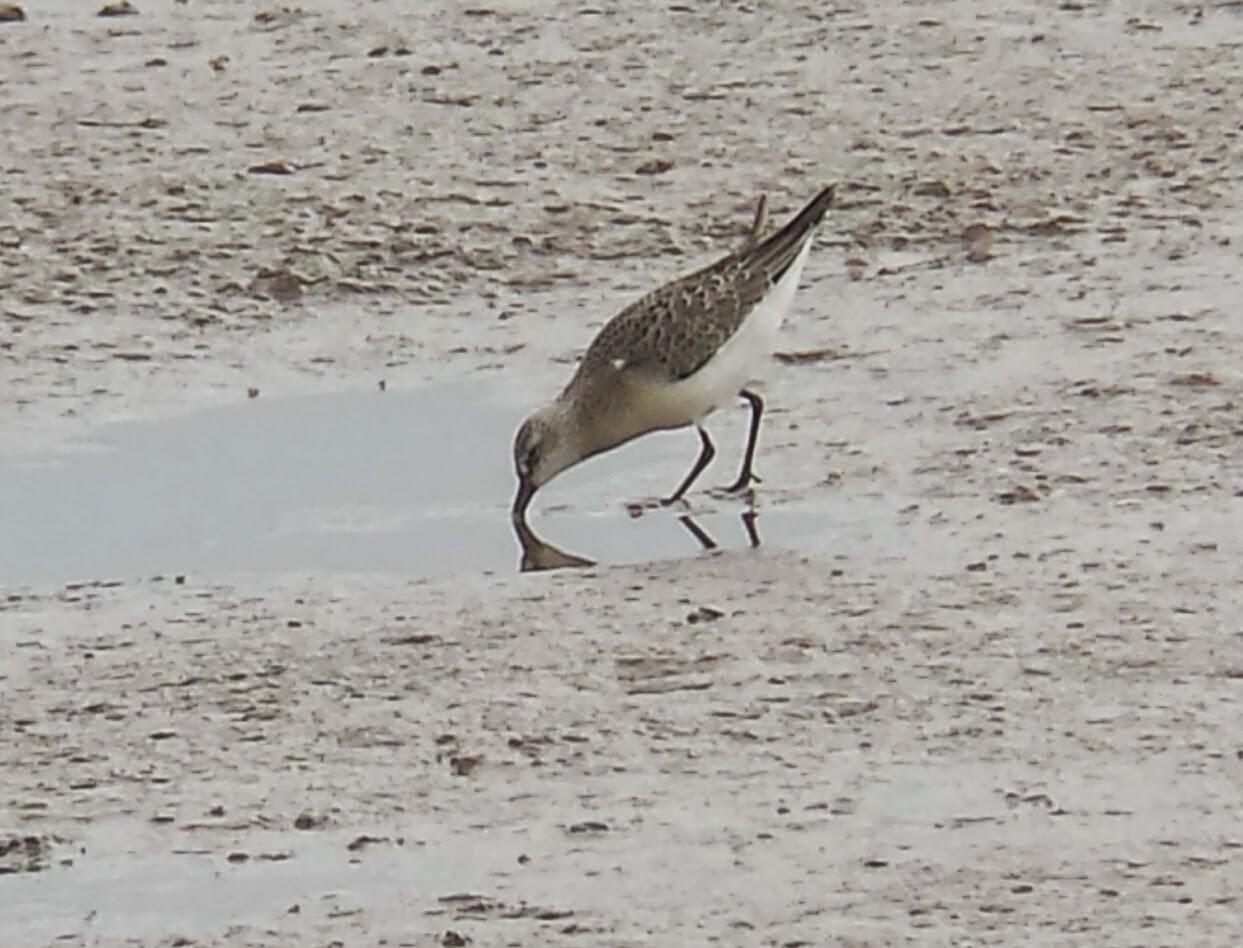 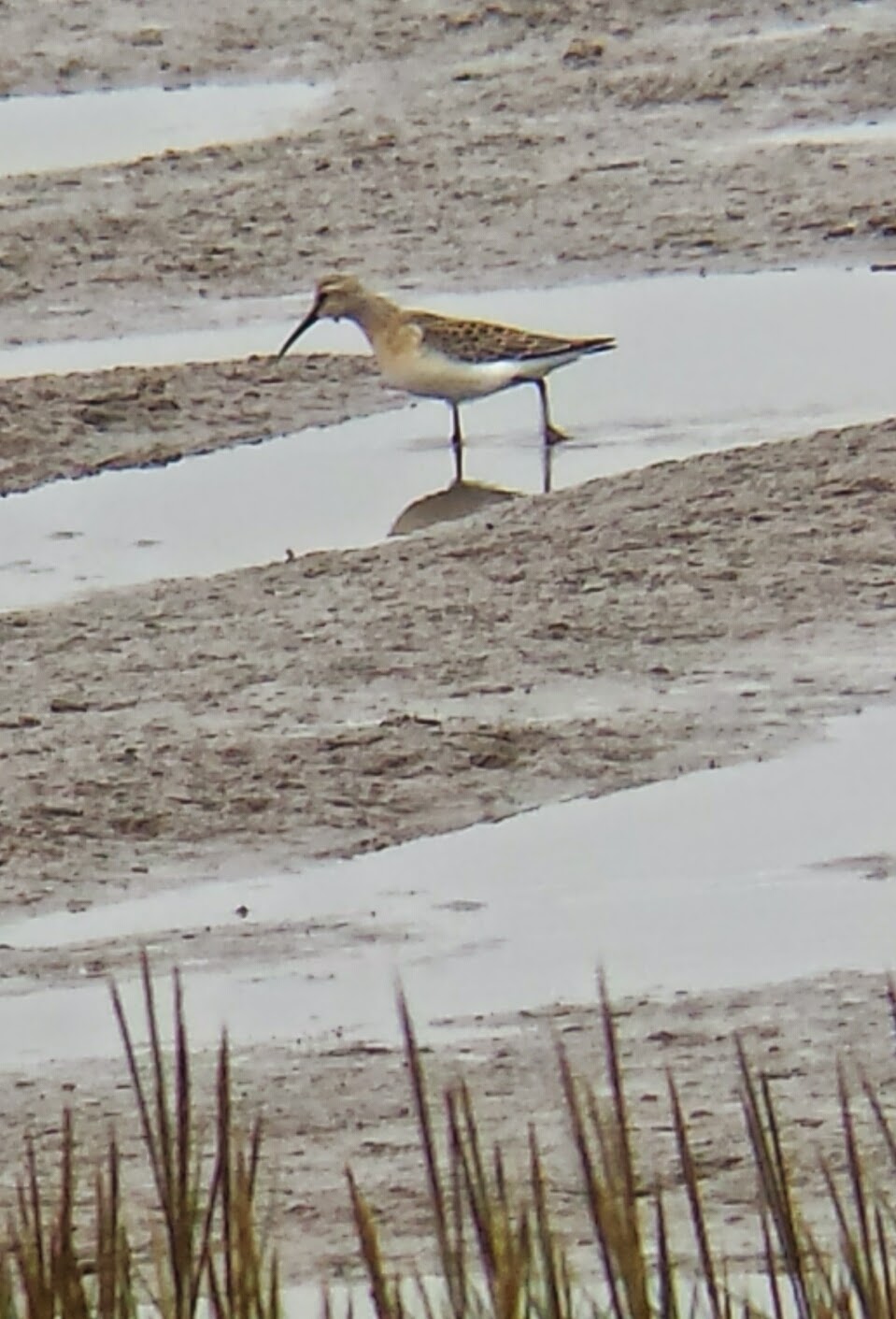 As we walked further up the path, a Sparrowhawk flew overhead and then I spotted at least a dozen Whinchat on some fence-posts and feeding in a field! Back home on the West coast I have been lucky to see a couple of Whinchat at Leasowe in the Spring, now here I was on the East coast looking at them at almost every opportunity! 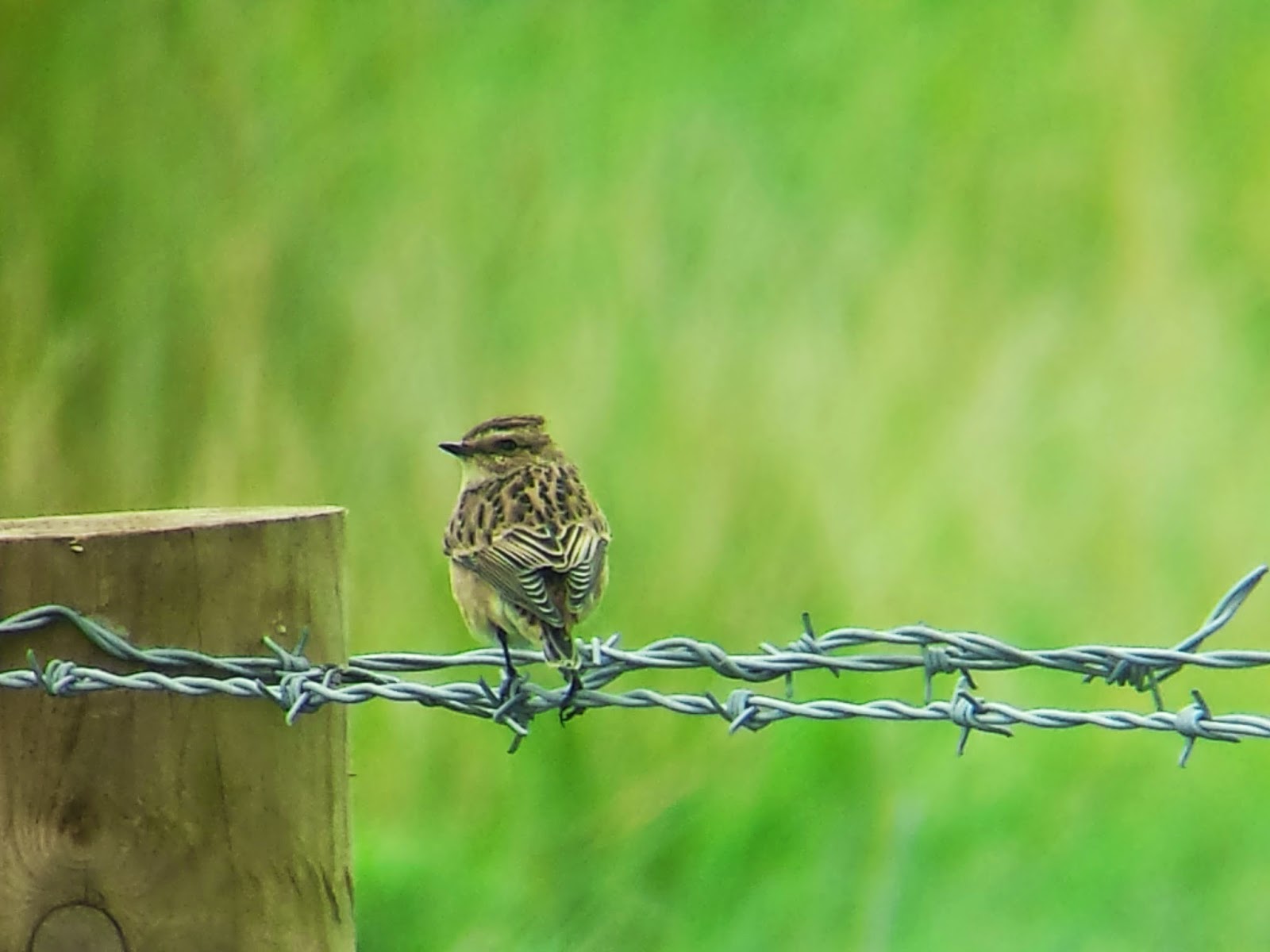 As we got near to the path overlooking the canal scrape hide, we scanned the bushes and I spotted a female Redstart sitting with her back to us. I got this quick record shot. 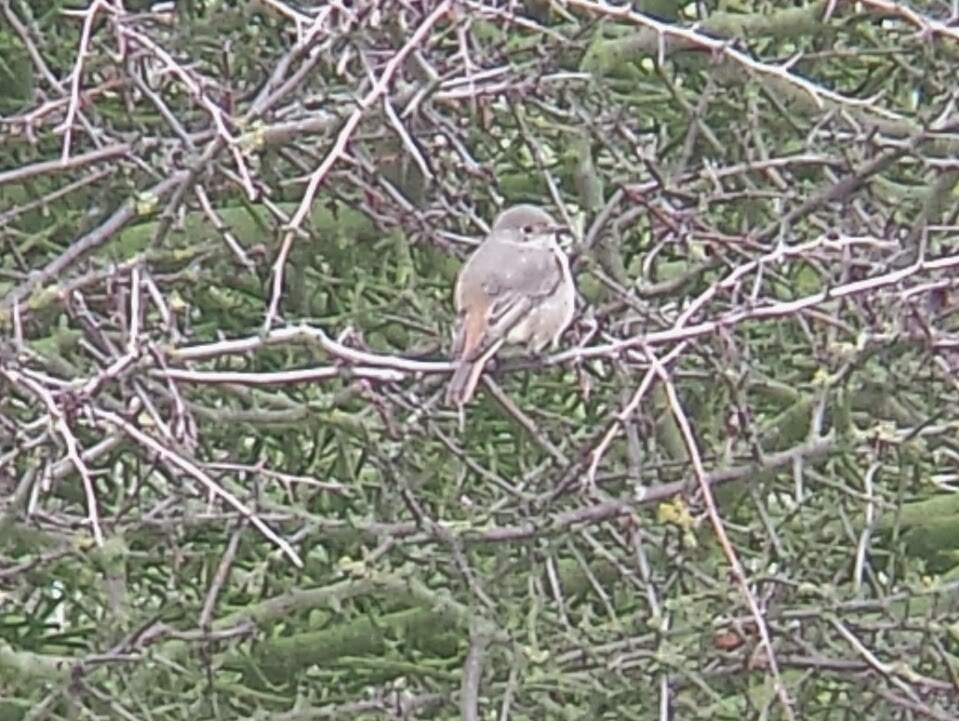 Overhead we saw a Peregrine scanning the Estuary for lunch until it disappeared out of sight. Back at The Warren we decided to look in on the bird ringing and they had caught some Meadow Pipits. Here one of the ringers at the obs explains a bit about the procedure and gives us a close up. 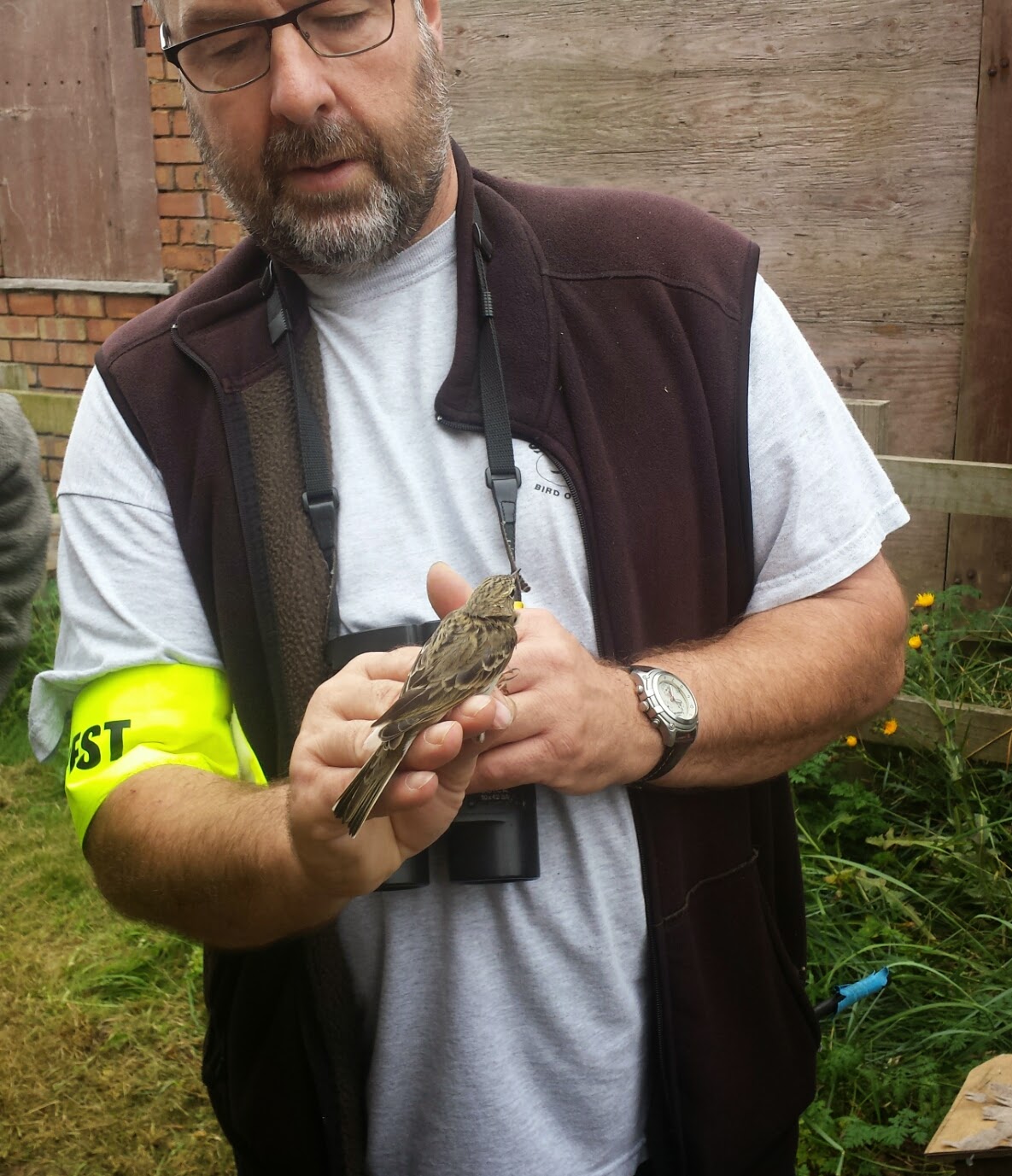 After a look inside the obs in which there are some impressive pics of birds caught & ringed down the years, we decided to have a quick look out on the Estuary as high tide was approaching. Lots of waders were on the move including, Plovers, Redshanks, 1 Spotshank, 4 Barwits, Curlew, Dunlin, but closer in I spotted a solitary Greenshank having a snooze (in background), oblivious to the goings on around it :) 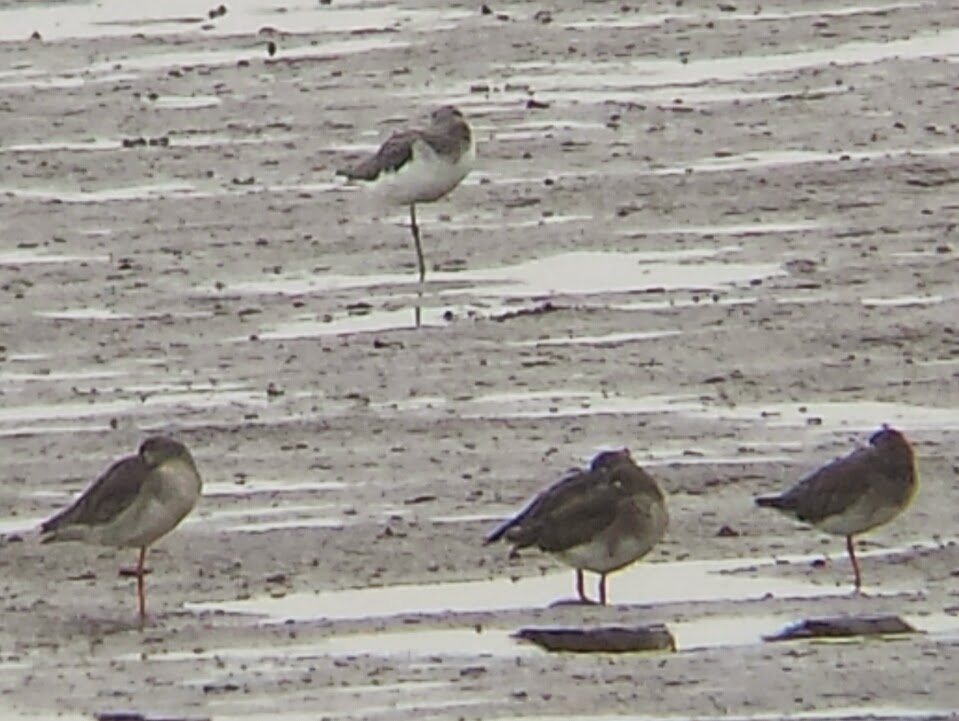 I had been in touch with a couple of friends from Twitter and we had agreed to meet up in The Crown & Anchor for a pint and a chat, as it happened it worked out perfectly, at about 2.30pm it started to rain quite heavily so I got a lift with the friends down to the boozer, whilst our Gary went back to the car for a catnap as he was feeling the effects of being up at 3am, driving and walking around. With me not driving, it was a wise move as he also had to drive the 168 miles home as well, so a big thank you :) My twitter friends are Mark Lucas and his son Ellis (who does a cracking blog called Ellis' wildlife walks http://elliswildlife.blogspot.co.uk/ ) and Rob Stokes who is also a keen birder & blogger http://robs-birding.blogspot.co.uk/

It was really nice to catch up with people who you socialise with online but sometimes will probably never meet, especially such friendly guys as these. After a pint or two of cider and a good natter, I got dropped back off by our car to see if our Gary was still alive! Thankfully after a couple of worrying seconds there was movement. After nearly forgetting my scope and bins in Marks car (only had two pints) I got my gear and said I may pop in and see them later when they are tucking into their hog roast supper at Westmere Farm.

It was now about 4.30pm so we had another cuppa and a sarnie and then decided to go back up to the seawatching hut and check on the pelagics, magic :) It was a good decision as we got talking to one of the obs guys and joined him for a sewatch & in the space of about 45 mins had seen, 2 Red Throated Diver, 3 Fulmar, 3 Little Gull, 10 GBB Gull, 1 juv Long Tailed Skua, 6 Arctic Skua,12 Gannets, 8 Sandwich Terns, 2 Arctic Terns & a Manx Shearwater. I then got interviewed by Next Gen Birder Jonnie Fisk! Hope my hair was straight lol. We then saw 8 Greenfinches our first finch of the day and a Reed Warbler in the Obs garden.

It had been a great day and I popped in at Westmere Farm to give in my raffle tickets for the draw later in the evening ;) and also to say goodbye to Mark, Ellis & Rob. The hogs were just polishing off their hog roasts as I entered to say my goodbyes :)  Sure we will meet up again in the future.

On the way home we stopped in at Kilnsea Wetlands and bagged a Little Stint that was feeding with a few Dunlin, great way to round off a superb day. Big credit goes to the staff and volunteers who made it such an enjoyable day.

I only won a prize didn't I lol, the Opticron Binoculars :-)