Our short break down to Norfolk had finally arrived and myself Shan & Paul set off in the three seater van at around 5am for the four hour journey to birding heaven. The journey started with Shaun driving and myself and Paul squeezed into the front, this was soon to change as Paul decided to be the dog and get into the back of the van as he was getting dead legs! Upon first light & passing into Lincolnshire you get a feeling of the broad open spaces and ploughed fields, rape fields, vegetable crops and endless sky. The weather was fine with a few nice days forecast so all was well. During the journey we still bird from the van and all species are added to the total.

First pit stop and breakfast time in Little Chef at Boston. Breakfast birding brought about Song Thrush, Dunnock, Linnets, Buzzard being mobbed by crows and a Robin. Fully refuelled and £10 each lighter after tea and an Olympic Breakfast, we headed for our first destination RSPB Frampton Marshes. It was about 9am on arrival and straight out of the van we saw Curlew, Oystercatcher, Grey Heron, Teal, Mallard, Pied Wagtails in the fields opposite the visitor center and a Blackcap singing nearby. Walking over to the freshwater scrapes by the reception centre we could hear plenty of noisy Black Headed Gulls. They certainly look fine close up though! 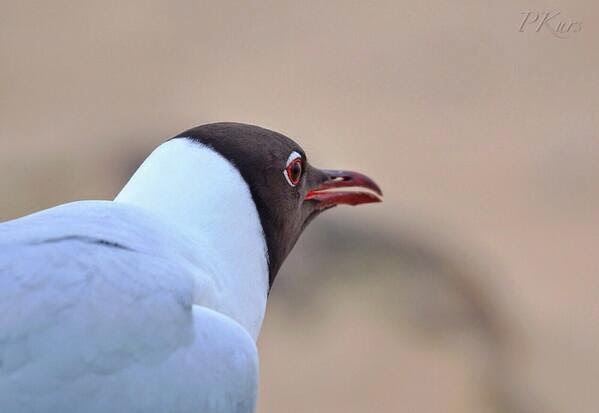 Most of the Islands were occupied by the gulls and a few Avocets were nearby.

I said to the lads we must have a Med Gull amongst that lot. Sure enough, I spotted one strutting around like cock of the rock and managed a cheap phonescoped record shot as it was quite a way out. 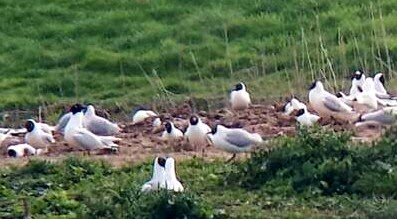 Other birds we could see included Tufted Duck, Wigeon, Mute Swan, Shoveler, Goldeneye and a pair of resplendent Great Crested Grebes stood out nearby :) 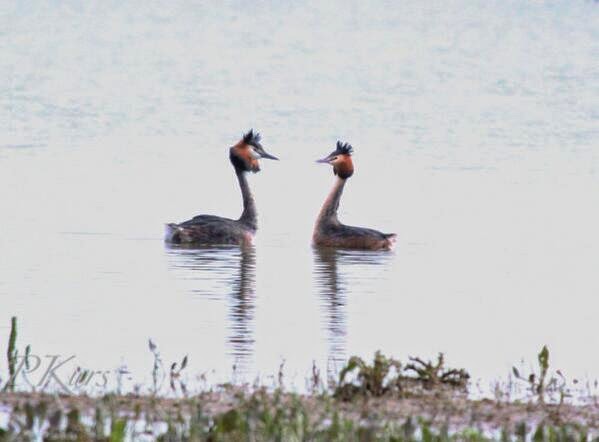 Walking down a little further Shaun made us aware of hundreds of Geese in the sky in the background. And then we spotted some of them in the flooded fields. They were Dark Bellied Brent Geese. 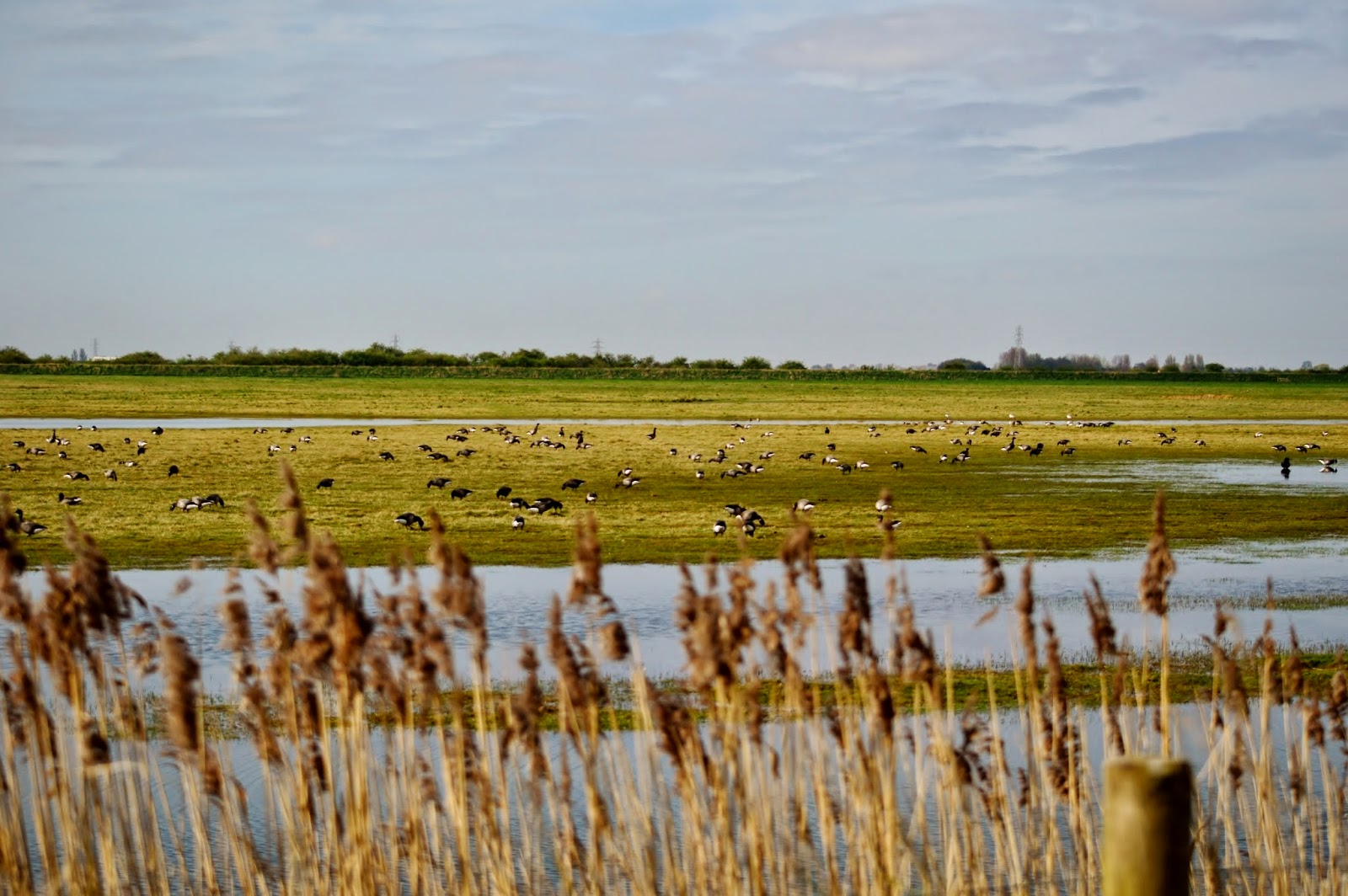 Skylarks were climbing to the heavens singing all around us and there was swarms of midges everywhere but not a hirundine in sight! Mad hares were all around in the fields and were a joy to watch as they played on this great reserve with not a care in the world :) 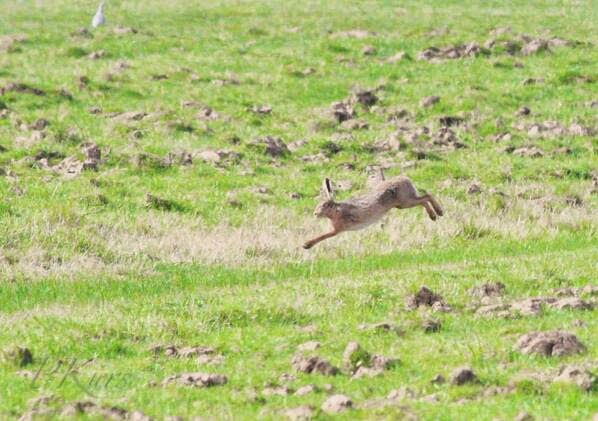 Paul spotted a few Ruff dotted here and there, probably the most mis-identified bird ever due to various sizes and plumage changes :- 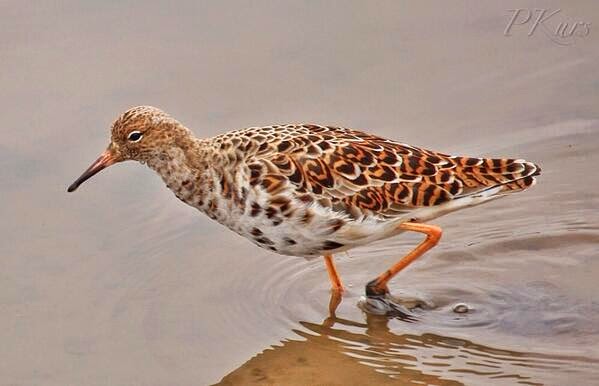 and then a fair sized flock of Black Tailed Godwit some immatures but most in reddish breeding plumage. 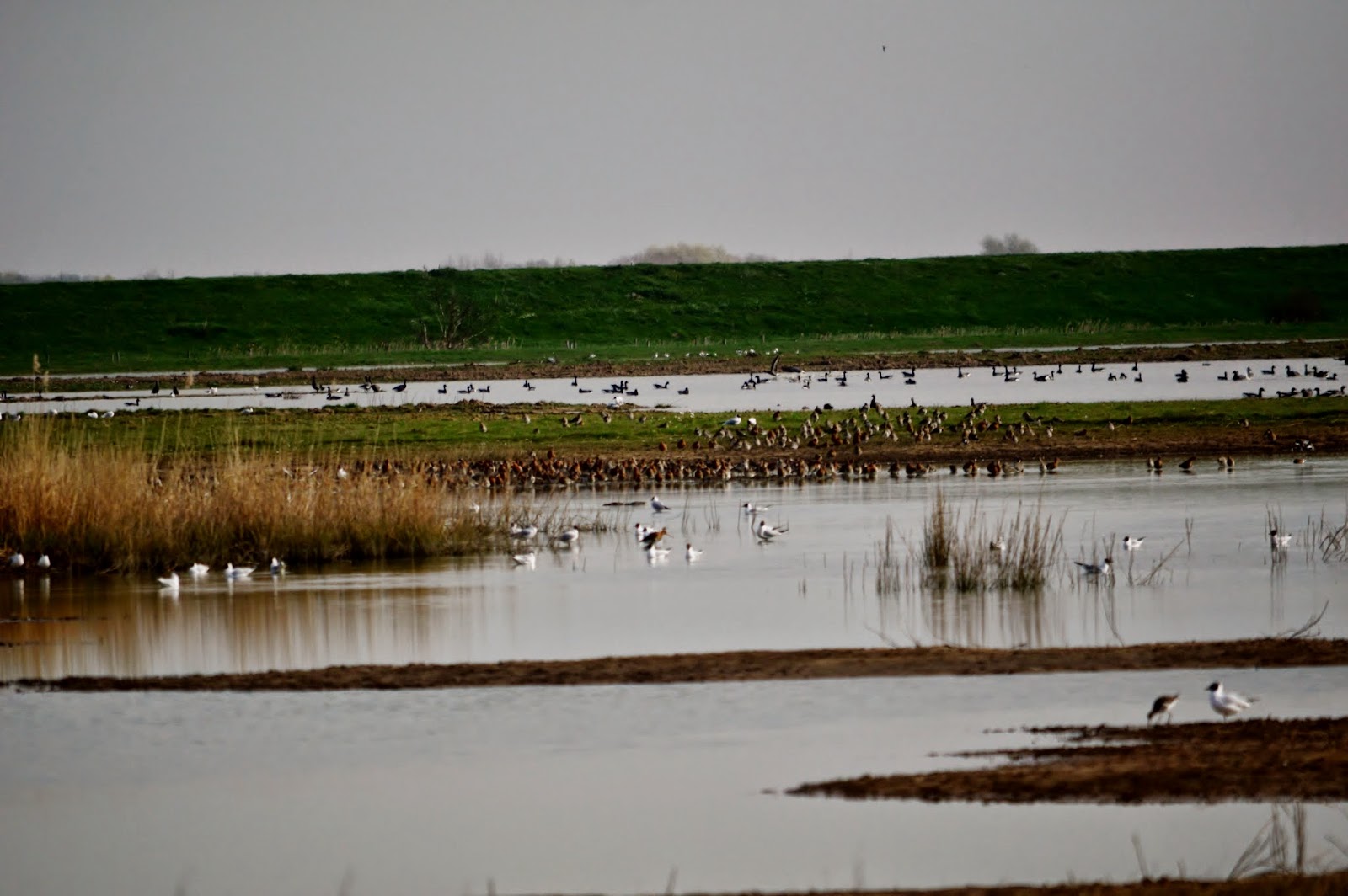 We then did a circuit of the lagoons up out onto an embankment that borders the reserve and looks out onto the saltmarsh. A few solitary Redshank were feeding out on the marsh along with a Little Egret but little else of note. Just then Shaun spotted a pair of Ringed Plover fly in to the lagoon, these were the first I had seen this year and looked fine. Scanning the lagoon I came across a solitary Little Ringed Plover also another year tick. 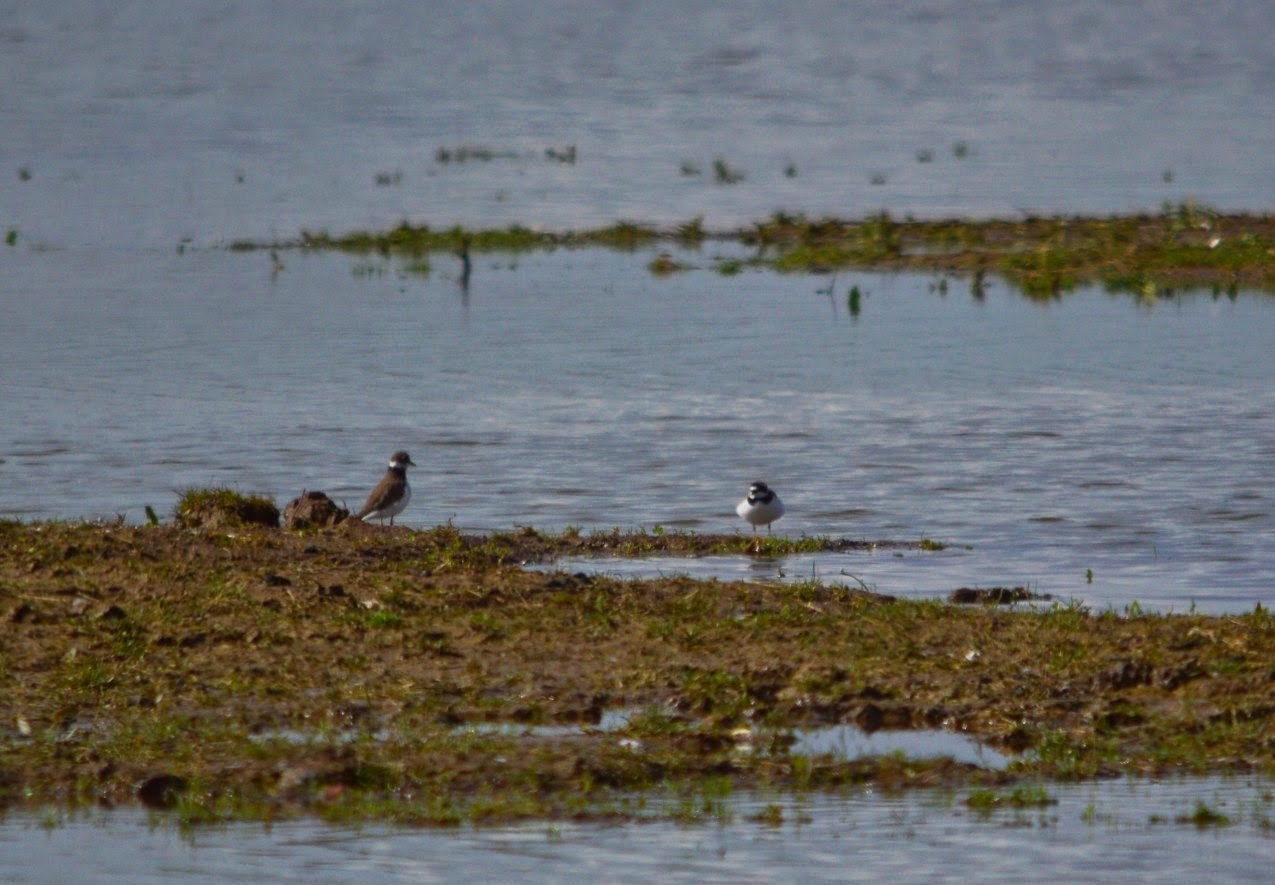 As we walked along we spotted several more Plovers busily feeding and squabbling with rival neighbours! A quick look in the hides produced nothing out of the ordinary bar a very pink Black Headed Gull! Spring was defo here and there were lot's of butterflies around the reserve, Peacock, Small Tortoiseshell and this lovely Brimstone, 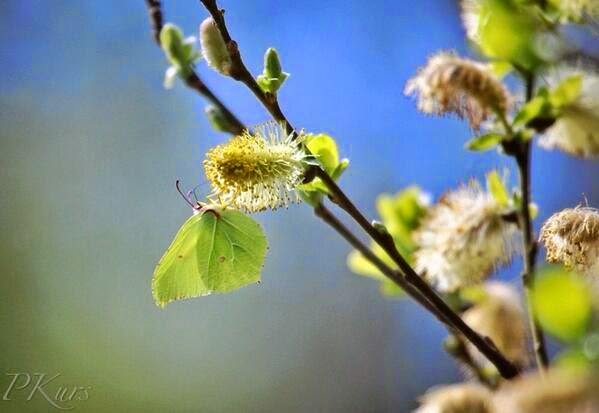 Cup of tea before we left & to donate a few quid to the reserve.

Back into the van and next destination was RSPB Titchwell, we had decided not to check in at our digs until after we had been birding. As we drove on it was hard to see a field that did not contain a Pheasant or a Grey Partridge! Also we had Kestrel overhead and a bit later on a Sparrowhawk circling. In the car park at Titchwell, I was looking up at a big group of Raptors circling high above, with Red Kite, Buzzard and Marsh Harriers all on the thermals. I spoke to the lady at the entrance about the Black Kite sighting and she said it was most definitely a mis-identification as in 30 years of birding she had only seen 3 (hmm), Oh well. A Redstart singing in the bushes and a Yellowhammer on the track towards the first hide certainly got me excited. As we walked down we could see Marsh Harriers flying above the reedbeds, a fantastic sight. Paul spotted some Pochard at the back of a nearby pool and Reed Buntings were singing from nearby scrub. 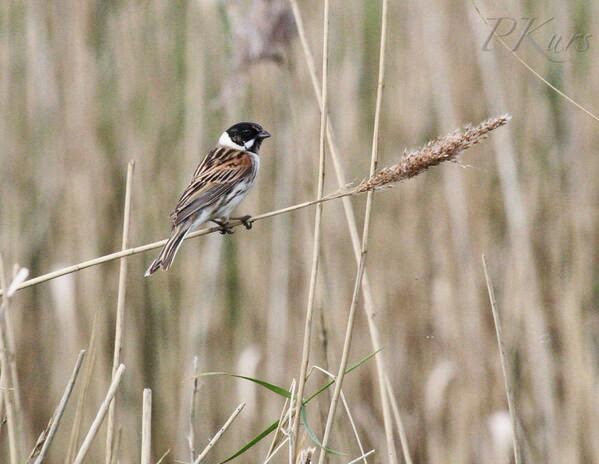 Entering the hide we had views of Bar Tailed & Black Tailed Godwits, (flying up and wheeling around in big circles) 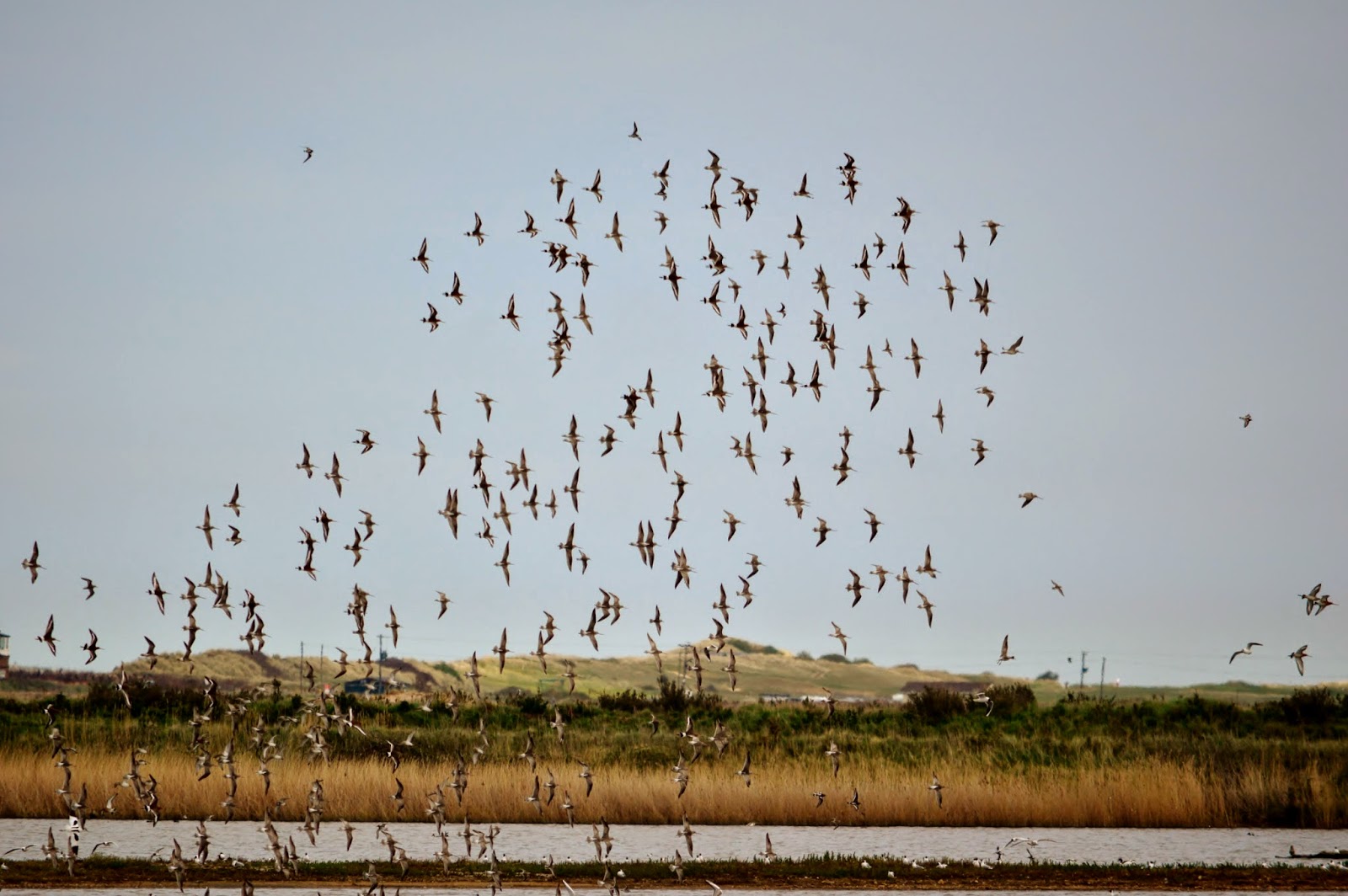 Knot, Dunlin and at least four Sandwich Terns. The Avocets were looking fantastic and easy to see why the RSPB made them their emblem bird :-) 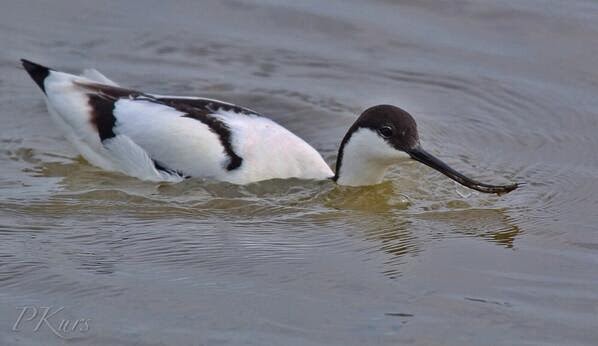 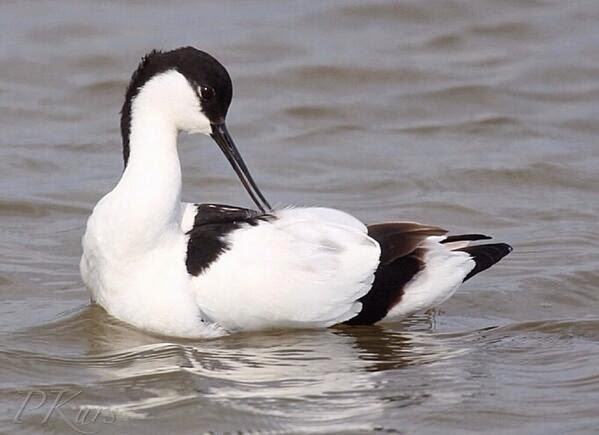 Just then the explosive song of a Cetti's Warbler rang out from a nearby reedbed, brilliant :) Movement at a low down window in the hide made us look and it was the most showy Snipe we had ever seen!! 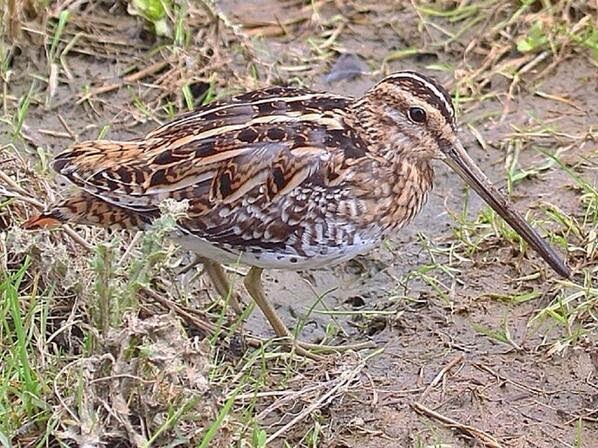 Exiting the hide and walking further on to the Parrinder Hide we could see more Redshank & Ruff in the odd creek and lots of Linnet in nearby fields on tide wrack. After a quick look out from the Parrinder Hide, where we saw Shelduck, Gadwall,(see pic) 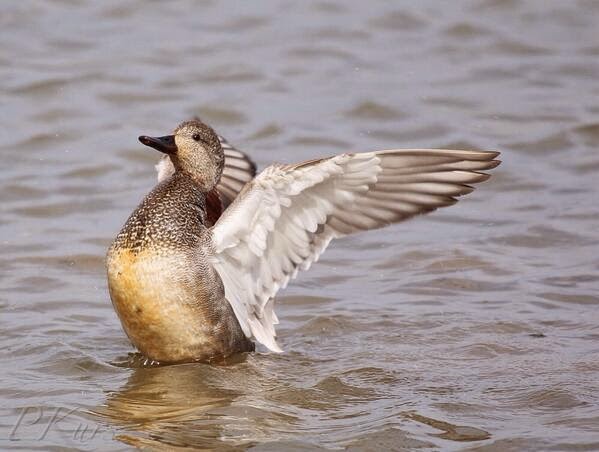 Grey Plover,Curlew,Turnstone and some Pintail fly in. We then walked up to the beach for a seawatch as high tide was around 5pm. Out to sea there were rafts of Common Scoter and I picked up a few Velvet scoter in amongst them as the sea was very calm. Some Sanderling were busily feeding and happily chasing the tide in and out as they went along. No sign of any Snow Bunting (mostly all moved on North by now) but a few Pied Wags. A most curious sight was a Common Scoter that decided to come out of the sea and go for a stroll up the beach! 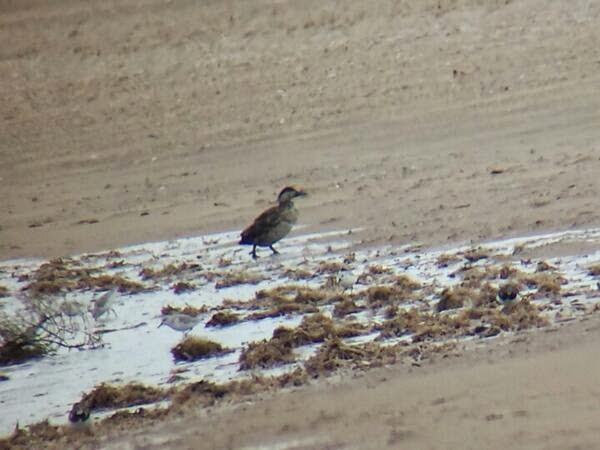 We decided to walk back to the van and drop the scopes off and just take the bins down to the Fen Hides and have a closer look at the Harriers. What a good decision this proved to be. After Paul had nearly stepped on a Robin near the van and myself on a fat Wood Pigeon, you get the impression these birds are fed by visitors! 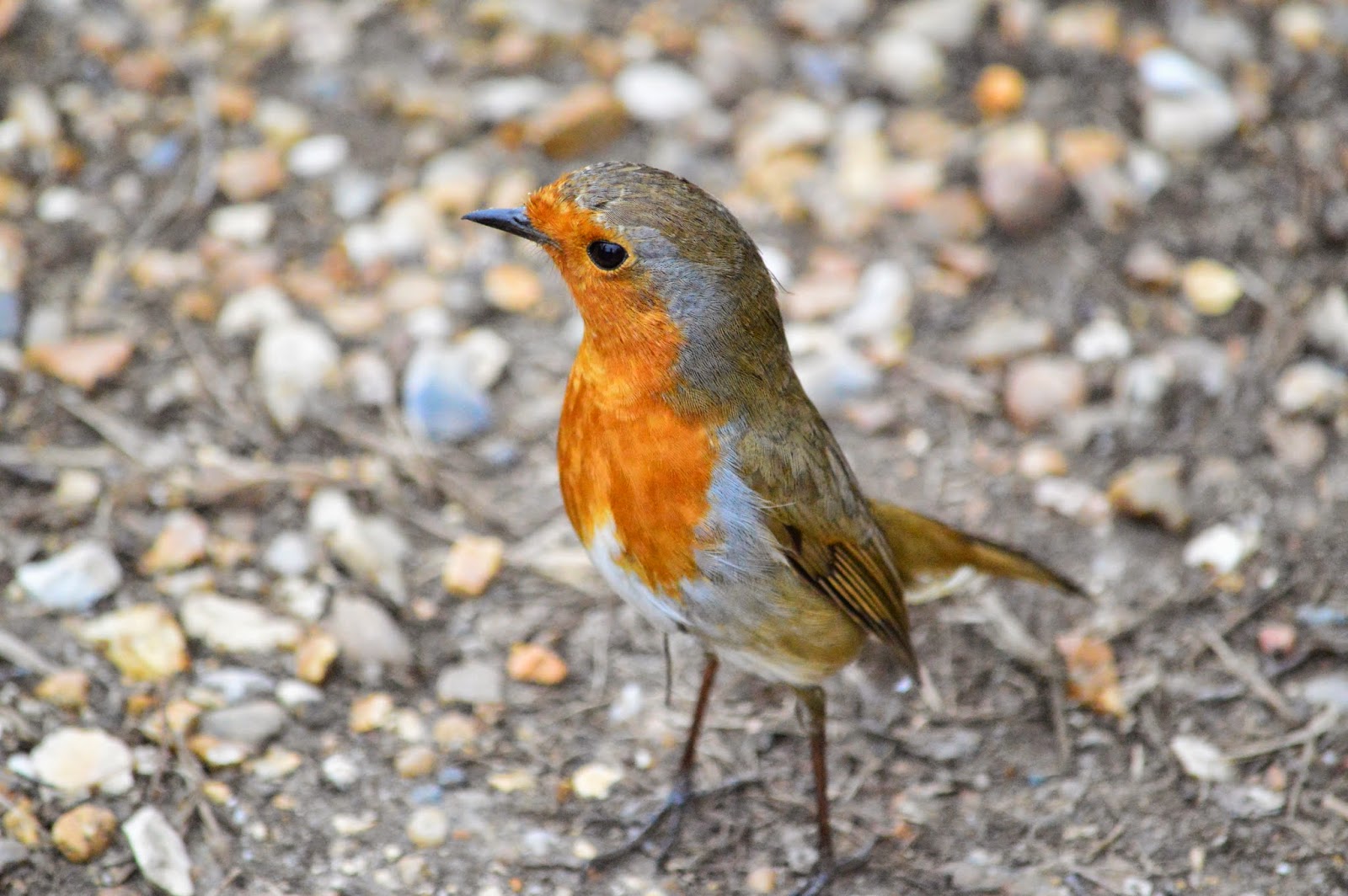 After a quick pasty at the RSPB shop, we walked the Fen trail and came across a couple of Jays in the bushes. At the Fen hide we got another Cetti's Warbler who was calling but could not be seen. Walking on we came across another Blackcap, numerous Greenfinches, Chaffinches, Great Tit & Blue Tit. Arriving at the Fen pools, we got views of quite a lot of Tufted Ducks but further up in the corner Shaun spotted a pair of Red Crested Pochard. Lovely birds and another yeartick! This one having a shake :) 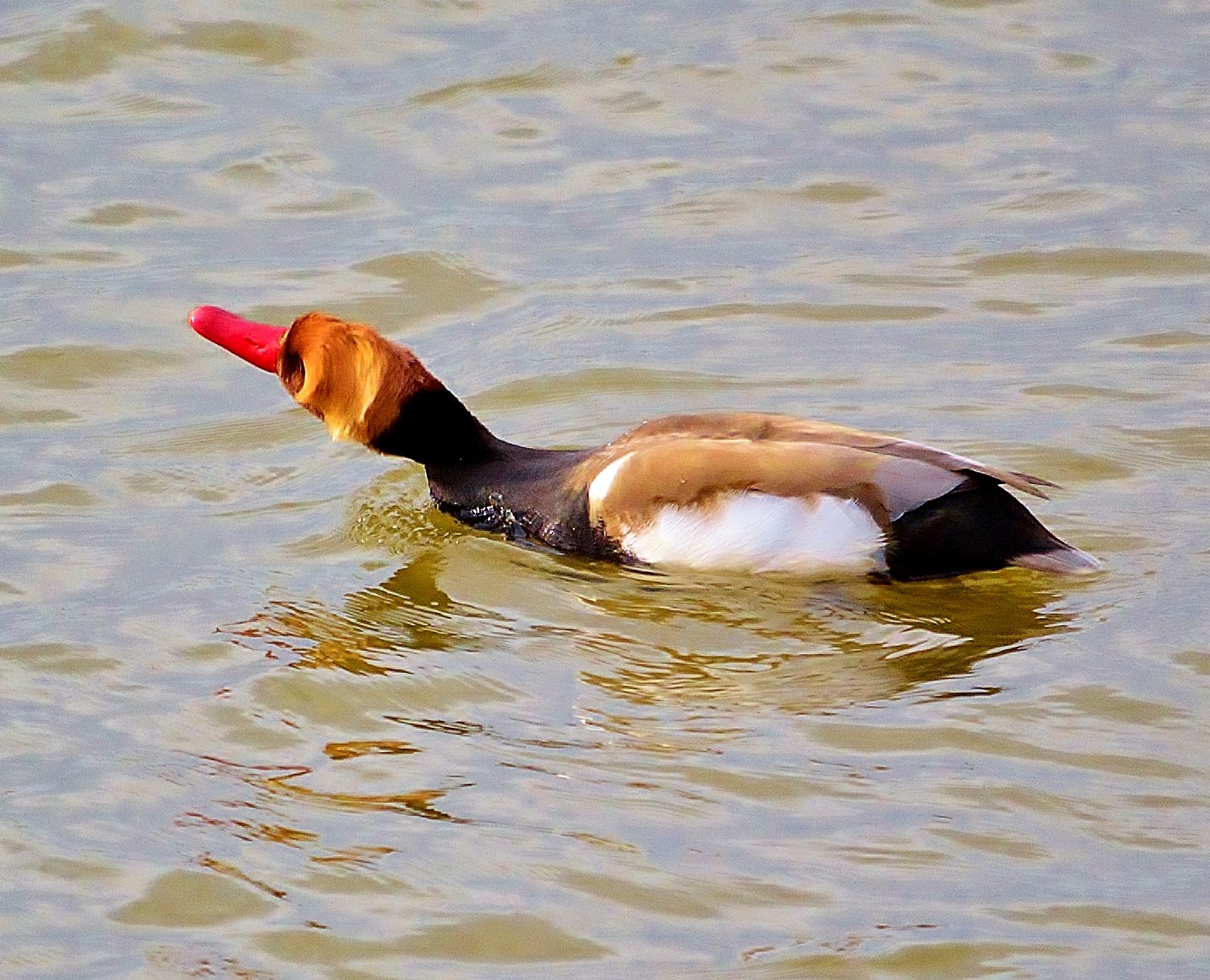 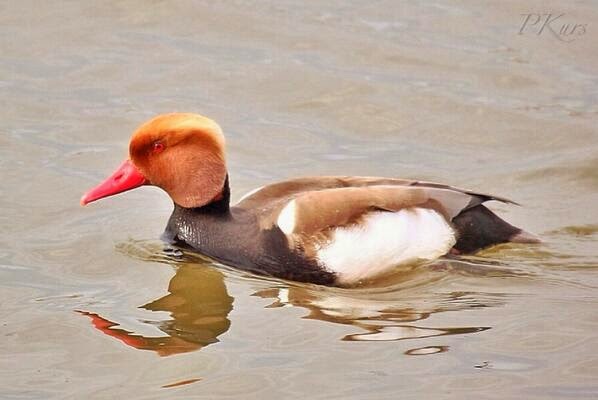 And the female moving along close behind, 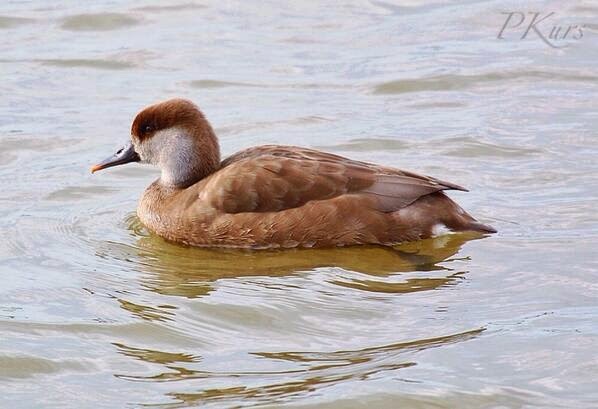 Just then the Harriers appeared and a male had a small vole, 'get ready for the food pass' I said and sure enough the female came up from underneath and a successful pass ensued, captured by Paul & Shauns cameras :) Brilliant. 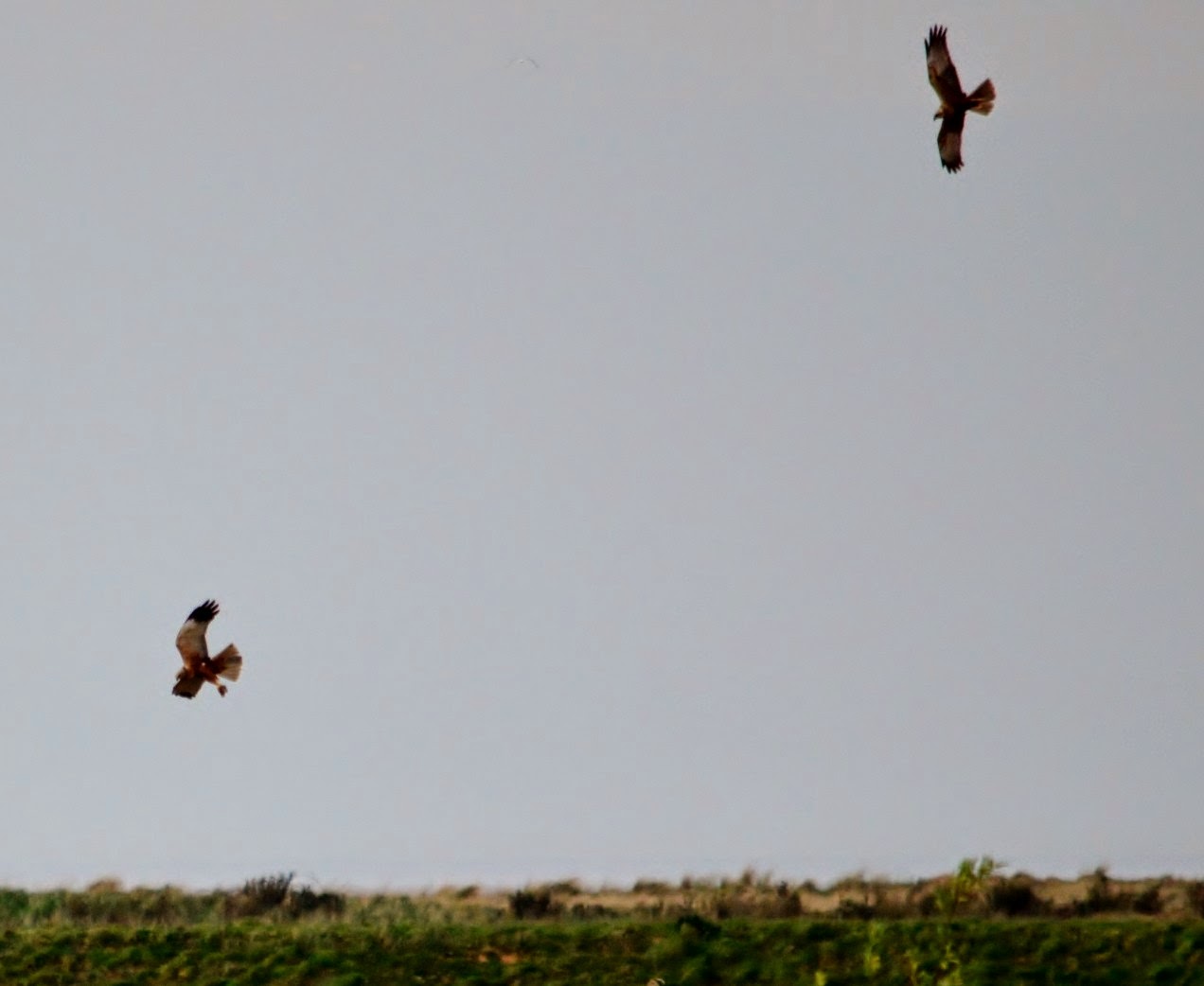 Back of the camera shot of female honing in for the food pass :- 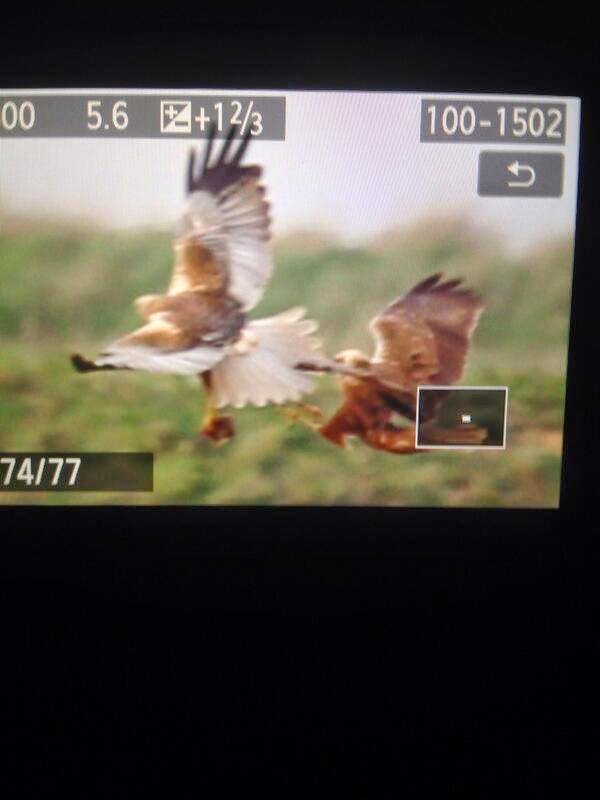 And success as she grabs her meal :) Wow, cannot script stuff like this, amazing. 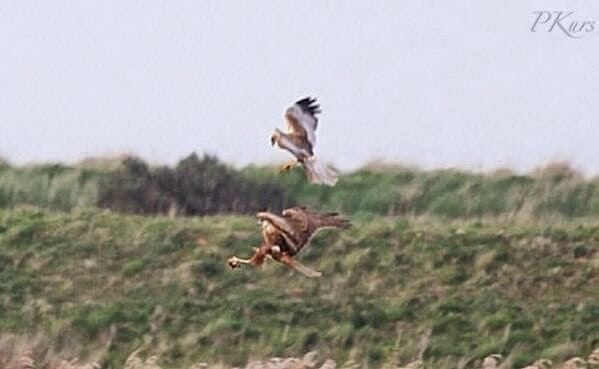 On the way back to the Van we heard a Grasshopper Warbler and also saw a pair of Red Legged Partridge on an unused farm path. 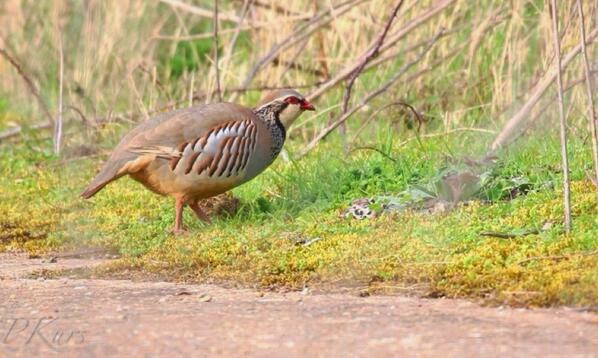 We decided to call in at Holme Village where there is a Golf Course near to the coast and see if we can see any migrants. Shaun & Paul got involved in a conversation with a rather eccentric chap who had been playing Golf and nicknamed him the Colonel. I could barely make out what he was saying but it definitely involved a Wryneck at some stage. I was busy spotting a rather large Mistle Thrush in a nearby tree. Anyways, moving on, we walked to the dunes and scoured the golf course with little luck until Shaun spotted a Wheatear on a bank. A bit further on a Swallow flew over, the first we had seen all day! Meadow Pipits and Linnets, but nothing else, maybe we were a tad early and the place will be alive most probably in the coming weeks. Last stop at Hunstanton and a quick look for any Ring Ouzels near the lighthouse (best early morning) no luck but a fine Grey Partridge having a dirt bath then strolling off :) 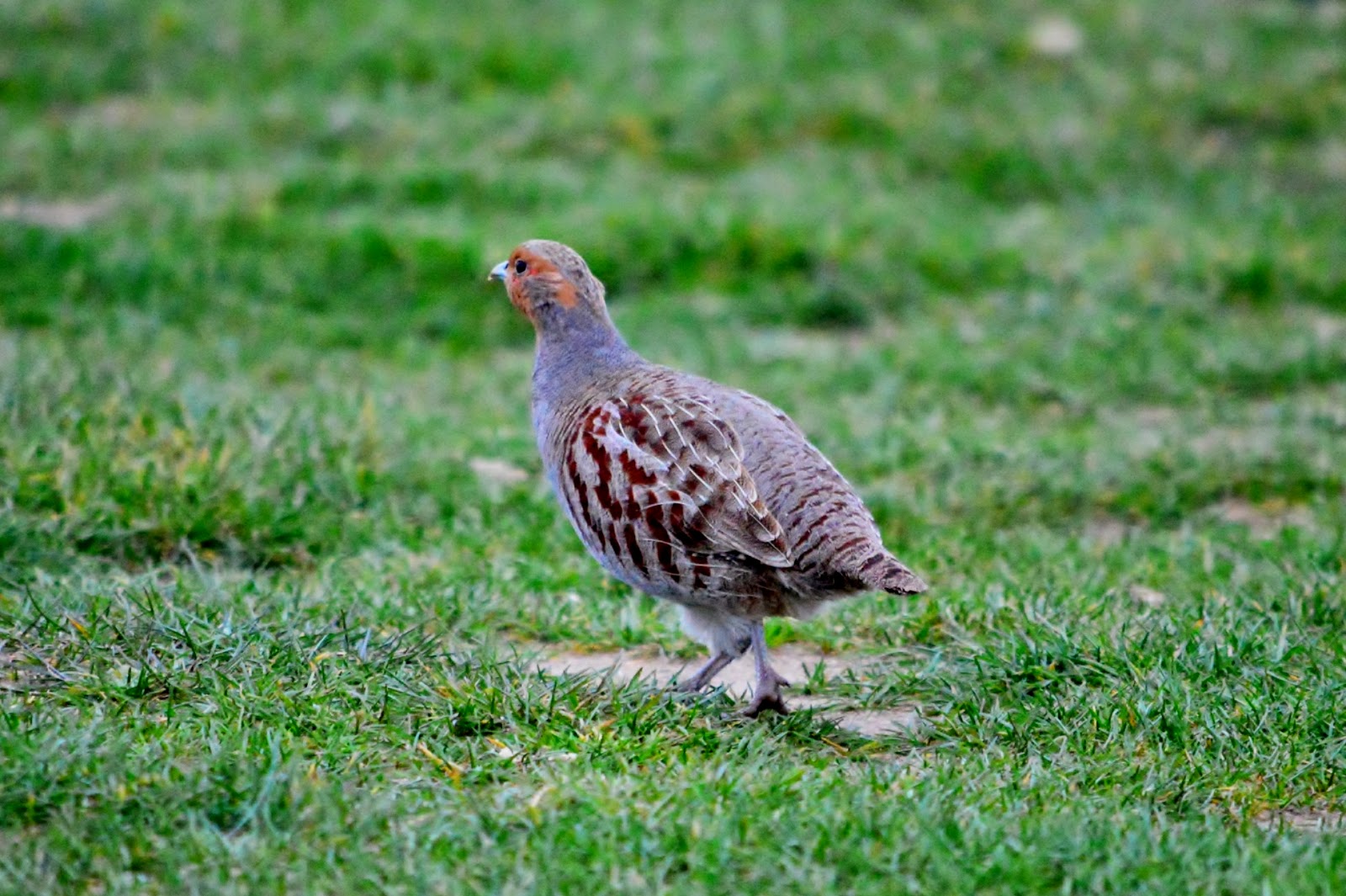 Back to The Crown Inn Gayton where we checked in got cleaned up and came down to the bar for a few ales for Shaun, Cider for me and a few glasses of fine wine for Paul. In between we fed our faces in the restaurant and then tried to engage in conversation with the locals "oo ar oo ar" the end of a great day. Bring on 2mo.